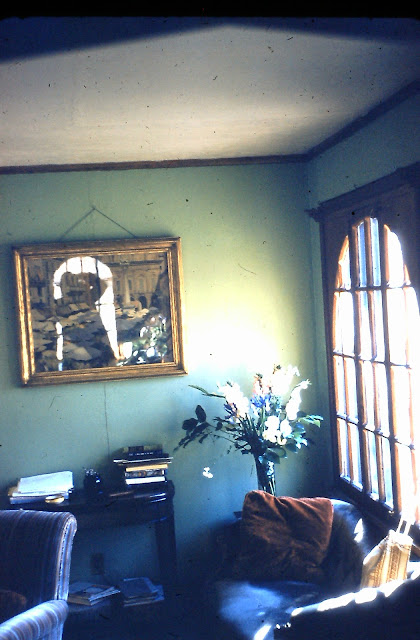 There were at least two Oppenheimers in Oswald Veblen's life. One was the well known physicist, Robert Oppenheimer, who became director of the IAS after WWII. The other is the painter Charles Oppenheimer, who painted at least two of the paintings that hung in the Veblens' living room. Though most of this post is about Charles, there will later come reason to believe that Robert may have left behind a painting or two.
We've been fortunate to track down photos of the interior of the Veblen House from when the Veblens were living there. Oswald took an interest in photography later in his life. Considering that the Veblens' will called for their pictures to become part of a museum at the house, this appears to have been a conscious effort on his part to document their life, the house, and garden. 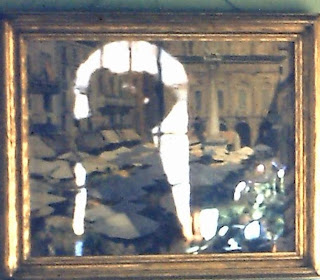 Given that Oswald was the one behind the camera, this reflection in the painting in the photo above is about as close as we're likely to get to a photograph of him at Veblen House.
The painting itself was most likely painted by Charles Oppenheimer, a British painter and contemporary of the Veblens. My curiosity about the painting for years had gone no further than that, but a graphic artist and friend of our Veblen House project was moved to track down the subject of the painting. 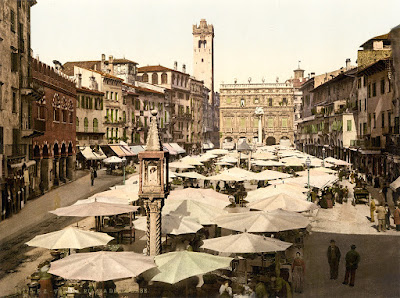 Given Alison's art background and skills at delving into the richness of the web, it wasn't long before she came up with the setting: the Piazza delle Erbe, a square in Verona, in northern Italy. This fits with a description of Oppenheimer's time in Italy:

While in Italy Oppenheimer painted the architecture of Florence, Verona and Venice, capturing the atmosphere of these old Italian cities.

One internet source describes Oppenheimer's trip to northern Italy in 1912, which may have been when this painting was made. 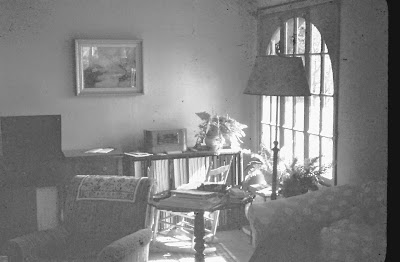 Veblen's photo of another corner of the living room shows another painting on the wall. 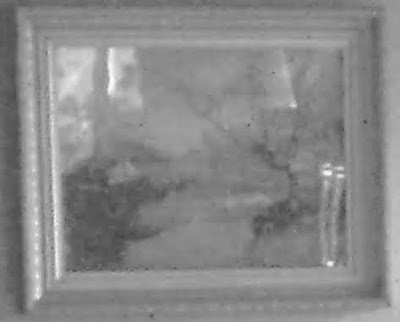 It shows what appears to be a tree overhanging a river, not unlike some landscapes Oppenheimer painted near his home in Kirkcudbright, Scotland, 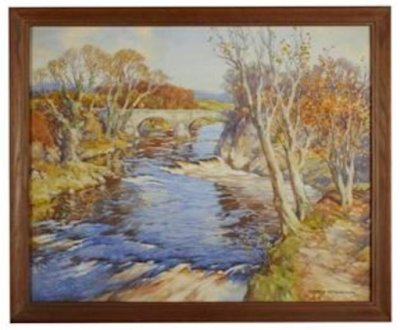 like this one.
There are a couple echoes from Oswald Veblen's life in Oppenheimer's life and paintings. Veblen grew up overlooking the Iowa River, which meanders through Iowa City. And in WW II the army conducted some of its military exercises near Kirkcudbright. Veblen played important roles in both world wars, leading groups of mathematicians and physicists to improve the accuracy of artillery. Like Veblen, Oppenheimer was drawn to both the natural and the built environment. 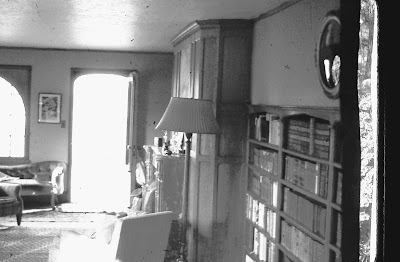 There was another painting in the Veblens' living room that we have yet to find a photo of. It hung above the fireplace. All we know of it thus far is a description given by Bob Wells, who rented the Veblen House from about 1975 to 1998, and raised his family there.
Bob described the painting as a desert, with scrub rather than cacti, with a view from a rise out across a broad valley, with mountains in the distance. Bob would sit there in the evening and gaze at that painting and let his imagination go. He had always believed it to have been painted by Robert Oppenheimer of the IAS, during his time at Los Alamos, New Mexico, and was surprised by my suggestion that it was painted instead by Charles Oppenheimer. Bob mentioned a neighbor of his, two doors up, who is a very talented painter, and might be able to recreate the painting if we could find an image.
It seems unlikely that Charles Oppenheimer would have had occasion to paint a desert scene. Robert Oppenheimer's mother was a painter, and owned works by Picasso and van Gogh. It's possible Robert picked up some painting skills along the way.
Update: The mystery of the painting above the fireplace has been solved. It was painted by Kate Cory, of a landscape near Prescott, Arizona. We still have no image of the painting, however.
Posted by Steve Hiltner