Exploring Ancestral Connections Between the Whiton-Stuarts and prominent Ogdens, Stocktons, and John Marshall

Before the Veblen House gained its name, it was built and lived in for about ten years by Jesse and Mary Whiton-Stuart. Mary's maiden name was Mary Marshall Ogden, with ancestry reportedly extending back to one of NJ's founders, David Ogden, and Chief Justice John Marshall. There also appears to be a Stockton connection. Two generations of Stocktons studied with two generations of Ogdens in Morristown. How closely related these Ogdens are to Mary's ancestors, and whether Mary is actually descended from the Chief Justice as reported in her obituary, is unclear. An earlier post notes that the Whiton-Stuarts and Richard Stockton III were both members of the Stony Brook Hunt Club in the 1930s.
In an effort to clarify and confirm the ancestral connections, I'm assembling some info below (click on the "read more"). Lineage doesn't really say much about who Mary was, but it's a start.
Read more »
Posted by Steve Hiltner No comments:

What Old Housewrap Tells Us About the Building of Veblen House

It was August 14 of this year, while beginning repairs on the east wall of the Veblen House, when we discovered the name Miller and Son. 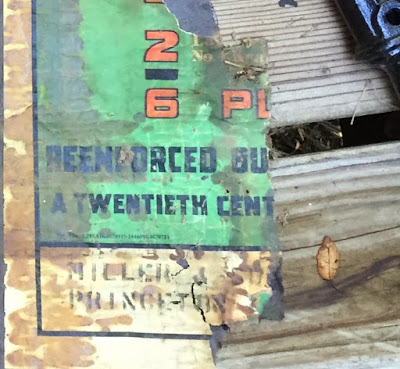 The name had been printed onto an early form of housewrap, found just under the wooden siding. 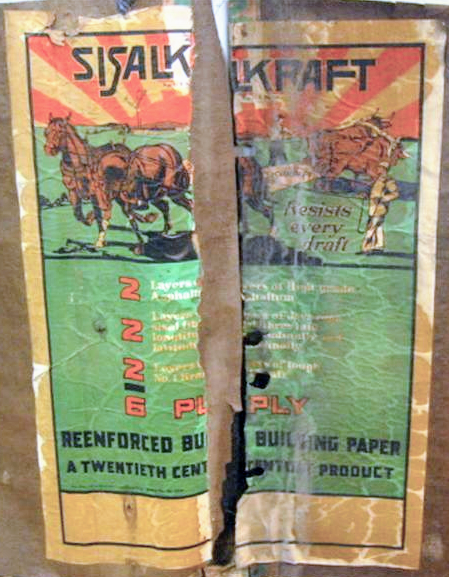 The name of the housewrap was Sisalkraft, named after the sisal fibers that gave it strength. Advertisements in the 1930s and '40s appealed to a home builder's thrift and high standards--"So moderate in cost, so gratifying in results." Words like "reenforced", "highgrade", "twentieth century product", and the slogan "Sisalkraft resists every draft" were reinforced by images of powerful draft animals--horses and oxen doing the work that needs to be done. The builder and first owner of what later became known as the Veblen House, Jesse Whiton-Stuart, was a lover of horses and surely liked the idea of his house being wrapped in images of horses. The house itself was ringed by a split rain fence, as if occupying its own corral. 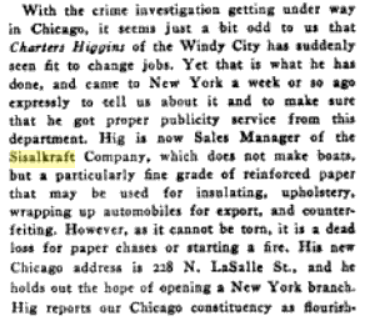 Sisalkraft, the Tyvek of its day, appears to have a Princeton connection. A 1927 Princeton Alumni Weekly reports that Princeton alum Charles Higgins, sales manager for Sisalkraft, had just moved east from Chicago to start a company branch in NY. Whether it was new to the east coast when the Whiton-Stuarts wrapped their house in it three years later is not clear. 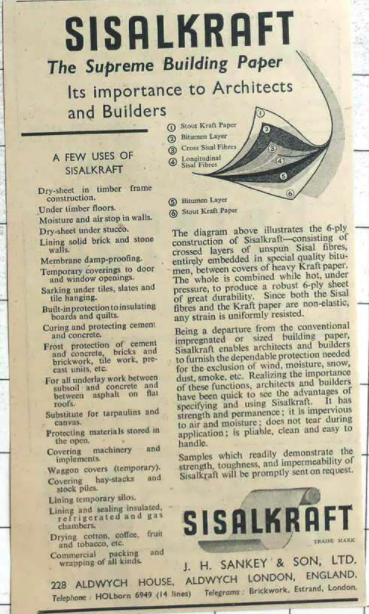 Sisalkraft was 6-ply--a sandwich of alternating layers of kraft paper, bitumen and sisal fibers all pressed together. The sisal comes from an agave-like plant most associated with the Yucatan peninsula, where its strong fibers were big business, fading in the mid-20th century as synthetic fibers began to compete. The Sisalkraft label mentions "java rope", probably because sisal was also grown in Java.
Now, 90 years after the Veblen House was built, the paper has lost its storied strength and become so brittle it crumbled in our hands. 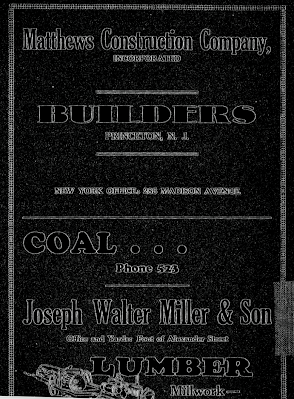 Paul Davis of the Historical Society of Princeton helped us with some initial research on the Sisalkraft's Miller and Son label:

"The Joseph W. Miller & Son Company operated on Alexander Street from 1928 through the late 1950's/early 1960's. According to their newspaper advertisements over the years in The Papers of Princeton, they were a building contractor, supplied building materials, milled lumber, installed residential heating systems, and delivered coal."

To put this in context. The Whiton-Stuarts moved their prefab house to Princeton in 1931 or so, and sold to the Veblens ten years later. More articles we found through that fantastic resource, Papers of Princeton, fleshed out the story of the Miller family and that era in Princeton. A 1942 obituary tells of Joseph Walter Miller's life:

"Mr. Miller was graduated from Princeton University in 1897 and afterwards attended Auburn Seminary. He was ordained in Spring Street Presbyterian Church, New York, and later preached in the Bethlehem Chapel in that city. In 1912, Mr. Miller moved to Princeton, where he purchased a farm. He was active in the Mercer County and Princeton Young Men’s Christian Associations, and a trustee of the First Presbyterian Church."

In 1928, Miller and his son Robert sold their dairy business on Provinceline Road and bought Boice's Lumber and Coal Yard at 316 Alexander Road. The younger son, Joseph, Jr, graduated from Princeton University in 1934, joined the business and also joined the Army Reserve Corps. Other suppliers of coal in town included some familiar names like Gulick and Grover.

Central heating with coal was coming into widespread use, often with furnaces that lacked fans to blow air through the house. Instead, the hot air would simply rise through an octopus-like tangle of ducts that spread from the furnace up into the various rooms of the house. Coal would be shoveled into the basement through a window, and fed into the furnace, requiring periodic stoking. Fans to blow the air became generally available in the mid-30s, five years after the Veblen House was built.

Soon after his wife died in spring of 1941, Joe Miller hosted a Men's Club picnic supper, after which "the oldest living alumnus of Princeton University, a member of the class of 1865," made "a short talk on the subject, "How to Live to be Ninety." Joseph died less than a year later, probably in his late 70s.

As home heating shifted from coal to oil, Miller's sons began selling fuel oil in 1954. The Cold War influenced their business as well. By 1961, Joseph, Jr. was head of the Culligan Water Conditioning Company of Princeton, and attended a conference entitled "Survival," about how to minimize the radioactivity in drinking water in the event of a nuclear war.

Miller and Son may have merely supplied the Sisalkraft for the house, or they may have served Whiton-Start as contractor and supplier of lumber, furnace, and coal, conceivably continuing to provide services through to the end of Veblen's life in 1960.
Posted by Steve Hiltner 1 comment: