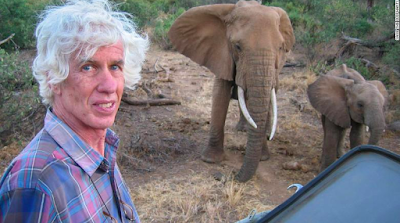 Today, on World Wildlife Day, a tribute to one of the world's great champions of elephants and rhinos. Esmond Bradley Martin devoted his life to investigating illicit trade in tusks and rhino horn, uncovering information critical to efforts to stem the slaughter of these extraordinary animals. Dr. Martin was murdered in his home in Nairobi a month ago, on Feb. 4. He was 76. The motive is not yet clear, though the nature of his often dangerous work could potentially have made him a target. Other possible motives were a botched robbery and a local land dispute. Whatever the motive, the meaning is in his extraordinary life and the cause he devoted himself to.

The news had additional meaning for all of us working to save Veblen House. Research into the Whiton-Stuart family that built the house (the Veblens were the second owners) had uncovered a remarkable connection. At age 63, Robert, the son of the Whiton-Stuarts, married Edwina Atwell Martin, mother of Esmond, making Esmond the step-grandson of the builders of Veblen House. Esmond is the great grandson of Henry Phipps, boyhood friend and business partner of Andrew Carnegie. There is a botanical connection as well: Phipps Conservatory and Botanical Garden in Pittsburgh, PA.

As Dan Stiles described in one of countless tributes, Esmond worked closely with his wife Chryssee and colleague Lucy Vigne, often going under cover to "find the obscure open-air wildlife markets and back-alley shops and count the numbers of what he saw, note the prices, find out who was supplying and who was buying, for what purpose ..." Without this information, it would have been impossible to identify what countries were creating demand for poaching.

He was, it could be said, seeking to expose the perilous cultural addiction that has driven an unconscionable pillaging of nature.

Again from the Smithsonian article:


"Among Martin’s contributions to the field: highlighting increased demand for rhino horn in Yemen in 2008, showing the drop in Japanese demand for ivory in 2010, detailing a burgeoning ivory trade in Hong Kong in 2011, and explaining the reduction in rhino poaching in Nepal in 2013. His most recent research documented how Laos’s and Vietnam’s ivory markets are booming."

There were tributes from Jane Goodall, disciple Tom Milliken, Brian Jackman, and many others. Brian Jackman begins his tribute this way:


"Snappily dressed like Tom Wolfe in a cream linen suit, a silk handkerchief spilling from his breast pocket and his silver hair flopping over his forehead, Esmond Bradley Martin, who was murdered in Nairobi last week, looked more like a literary critic than the sworn enemy of the illegal trade in ivory and rhino horn. He was a man with impeccable manners and a fondness for string quartets and antebellum architecture.

But beneath that deceptively fey exterior he was as tough as teak and totally fearless as he worked undercover, posing as a buyer to expose the smuggling cartels and their international trafficking routes between Africa and south-east Asia."


“Esmond was one of conservation’s great unsung heroes,” said Save the Elephants’ founder, Iain Douglas-Hamilton, who, along with Bradley Martin and Stiles documented the catastrophic fall in elephant numbers and brought the issue to the world stage. His meticulous work into ivory and rhino horn markets was conducted often in some of the world’s most remote and dangerous places and against intensely busy schedules that would have exhausted a man half his age … He was my friend for 45 years and his loss is a terrible blow both personally and professionally.”

“He was a giant of a man in his field – quite literally, his tall, gangling figure and shock of white hair made him an unlikely undercover investigator,” said Greg Neale, ex-environment correspondent at the Telegraph. “But that was part of his role as he sought to understand the extent of the rhino horn (and ivory) trade, often putting himself at real risk in some of the world’s most lawless places to establish the economic and cultural background to the forces driving the rhino and elephant towards extinction.”

The Friends of Herrontown Woods has reached out to the Martin family with condolences for this tragic loss, and has expressed a desire to use Veblen House in part to honor Esmond's work and example in an ongoing way. From what we've learned, Esmond Bradley Martin exemplified the quiet yet indefatigable and profoundly influential approach for which Oswald Veblen was known.