A Mingling of Whiton-Stuarts and Pynes in 1920s Morristown

The Whiton-Stuarts, builders and first residents of what would later become known as the Veblen House, are a fascinating family to research. They were wealthy, idiosyncratic, peripatetic, adventurous. The husband, Jesse, dropped out of Harvard to travel the world, then settled down long enough to get married and build a prosperous company selling high-end real estate in Manhattan. The marriage endured, but their means and apparent restlessness caused them to make frequent shifts to new locales. It may have been Jesse's passion for the outdoors, particularly hunting, horses and hounds, that prompted a move to a cattle ranch in Prescott, Arizona when their kids were growing up. Moving back east, they lived in Morristown, seemingly timed with Jesse's stepfather's last years, but also lived in Greenwich, CT, before moving to Princeton in the early 1930s. Their two children each married three times, into families of prominence and wealth.

Our research into the Whiton-Stuarts always swings back to two central questions: What prompted their move to Princeton, and what is the story behind the prefab house they brought along with them from Morristown, NJ? The answer to the latter almost certainly resides in the microfilm of old newspapers in the Morristown and Morris Township Public Library. Those newspapers have yet to be digitized, so we're first harvesting whatever clues to their whereabouts and lifestyles can be found on the internet.

Though the Morristown Topics was published from 1921 to 1928, only the first year's issues could be found online. In those were 8 references to the Whiton-Stuarts, providing clues to their upscale social circles and Jesse's passion for horseback riding. Newspapers back then tracked closely the whereabouts of people of wealth and status, making it easy to see who was socializing with whom.

THE PYNES AND THE WHITON-STUARTS
One possible answer as to why the Whiton-Stuarts moved to Princeton in the early 1930s, and ended up living next to the Pyne's horse farm, is that they moved in the same social circles as the Pynes who were based in Princeton. A list of those who took part in fox hunts in the Morristown area in the fall of 1920 includes Jesse Whiton-Stuart and two members of the Pyne family: Grafton and Rivington. 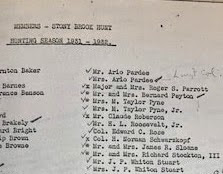 Thanks to Paul Davis of the Historical Society of Princeton, I have learned that Princeton had its own version, the Stony Brook Hunt Club, that continued through 1937. The list of members for the 1931-2 season shows the Whiton-Stuarts as members, along with the wives of Moses Taylor Pyne and his son, M. Taylor Pyne, Jr. The latter is likely Agnes, who owned the horse farm in eastern Princeton next to the land the Whiton-Stuarts built their home on--what we now know as Veblen House and Herrontown Woods. Other names on the membership list include Richard Stockton, III.

The lives of the Whiton-Stuarts and the Pynes may have intersected in New York as well, where they both had homes on Park Avenue. A connection can be found two generations prior, when Jesse's step-grandfather signed a letter to Congress during the infamous hung election of 1876, also co-signed by ancestors of the Pynes and Marquands.

JESSE AND THE CONSPICUOUS LEISURE OF THE ESSEX FOX HOUNDS

Gigs I've played as a musician have sometimes landed me in one or another of the old country clubs, where paintings on the walls depicted fox hunts. Why, I would wonder, would people want to dress up like that and chase a fox? 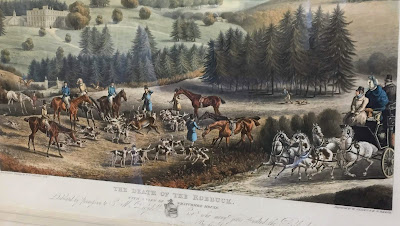 (A bit of an aside: Just visited the Institute for Advanced Study, and was surprised to find two paintings of this sort on the wall of the room in Fuld Hall where elite scholars meet every afternoon for tea (see photo). Among other decor in the room is a bust of Einstein.)

The Morristown Topics offers some insights into that world of conspicuous leisure, which may or may not be the same world Oswald Veblen's uncle Thorstein wrote about 20 years prior in "The Theory of the Leisure Class."

The aim here is to describe rather than judge the culture of the wealthy in the 1920s, of which the Whiton-Stuarts and Pynes were a part. It's tempting to look back and judge those who found sport in a fox's distress and (sometimes) demise. But any judging must be done with full awareness that our own era will be the most harshly judged of all, as we knowingly alter the global climate. We can question past behaviors, but any notions of moral superiority are illusory.

Fox hunting season extended from November into April. The red foxes that now populate our neighborhoods, nonchalantly trotting down our streets and nesting beneath the neighbor's house, were originally introduced from Europe for the purpose of fox hunts. The native gray fox is a less sporting quarry, since it can quickly elude the hounds by climbing a tree--a skill red foxes do not have. The fox was pursued by hounds and horses through a mixed landscape of forest and fenced farms that tested all participants' riding ability. There was cooperation among landowners who would make their land conducive to the hunt, and the fall/winter hunting season presumably minimized any trampling of crops. Wire fences were "paneled" with wood to protect the horses from the barbs as they jumped. The chase began when the hounds "found," i.e. picked up a scent in a "covert"--a thicket where foxes often hide out during the day. The chase would end when the fox was "run to earth," meaning it disappeared down a hole, or more gruesomely when it was caught and killed by the hounds.

This account of a hunt, from the first issue of the Morristown Topics on Dec. 31, 1920, gives a sense of the experience:


ESSEX FOX HOUNDS
The members of the Essex Fox Hounds are hoping that the snows and rains of the first of this week will not close an enjoyable season. The hunters have had several excellent runs, two record breakers, and very few blank days, one of the most famous taking place on Thanksgiving Day when the hounds, meeting at Hickory Tree, found very shortly after the meet in the woods, north of the river. The fox led them across the farms of Messrs Harry Hoy and S. Harold Freeman and on to the neighborhood of Pottersville where he went to earth after a run of ten miles with only three checks, except for a few moments when the field was held up by wire and winter wheat. The hounds were in sight practically all of the time. Another run, the hounds found late in the day in a field south of the river. The fox ran to earth a hundred yards beyond the fins but was dugout and led a glorious chase across the Bedminstjer-Pluckamin road, up the Schley hill and then circled around the woods on the summit. The run lasted almost two hours, darkness causing its close. Among those who have ridden this fall are: Mr. and Mrs. Thomas Symington, Mr- and Mrs. J. McAlpin Pyle, J. P. Whiton Stuart, Earle N. Cutler, LeEoy Whitney, Mr. and Mrs. R. H. Williams Jr., Mr- and Mrs. Crawford Barton, Mr. and Mrs. Winston Chanler, Mr. and Mrs. Fred W. Jones, Mr. and Mrs- Hagan, Mr. and Mrs. Charles Scribner, Jr., Mr. and Mrs. K. B. Schley, Miss Emily Stevens, Miss Mary Stevens, Miss Agnes Fowler, The Misses Brice, the Misses Hawle, Dr. A. S. Knight, A. Hyde, F. Van, S. Hyde, A. Musgrave Hyde, Rivington Pyne, Grafton Pyne, Arthur A- Fowler, Alexander Philips, William A. Larned, George Meseroy, DeCoursey Fales, Richard A. Gambril.

Reports from Somerset Hills in December, 1921, nearly a year later, illustrate that the fox hunts could be perilous for the hunters as well:


Mr. Whiton Stuart had a fall and broke his arm. The fracture was impacted and it was with considerable difficulty that Dr. Green had him carried to Mr. George Brice's house from which he was later taken to All Souls' Hospital.

Mr. J. P. Whiton-Stuart, who has been at All Souls' Hospital recovering from a serious injury received on the hunting Held, has left for New York, where he will undergo an operation.

Mr. Whiton-Stewart, who broke his arm while hunting with the Essex Fox Hounds last month, is reported as doing well at his home in Greenwich.

Other mentions of the Whiton-Stuarts are about travels and schooling for their son, Robert:

Jan. 21, 1921: Mr. and Mrs. J. P. Whiton-Stuart have left for their apartment on Park avenue, where they will spend the remainder of the winter

CONSPICUOUS LEISURE AND GOOD WORKS
Mixed with the conspicuous leisure is evidence of people achieving remarkable things for the public good. In the Jan. 21 issue, talk of sport segues into news of a woman who fought to protect the cliff dwellings of Colorado and to found Mesa Verde National Park.


The extreme cold of the last few days will cause many to feel the lure of a mild climate where life is filled •with all the sports of the great out-of-doors—golf, polo, fishing, swimming, hunting and aeroplaning, that new pastime which has not yet lost its novelty.

Mrs. Gilbert McCIurg, formerly a resident of Morristown, has been spending a few days with her sister, Miss Donaghe. Mrs. McCIurg, who recently made her home in Colorado Springs and Stonington, Conn., is known as a writer and lecturer, her special work dealing with pre-historic ruins of America. The public knew very little of the historic value of these ruins previous to the founding of the Cliff Dwelling Association, of which Mrs. McCIurg was the originator and which has now been placed under the protection of the Government. Mrs. McCIurg has returned to her summer home in Stonington, where she has purchased an interesting building of the Georgian period.