Thus far, the 1950s appear to mark the beginning of formal open space preservation in Princeton. The Marquand family donated 17 acres in 1953, "for use as a public park, playground and recreational area for the benefit of the people of . . . Princeton and its environments.” As farms were giving way to housing developments on the east side of Princeton, Mrs. M. Taylor Pyne, Jr. donated land in 1956 to Trinity Church--what we now know as the All Saints Church tract.

It was the Veblens who donated the first land intended to be preserved in its natural state, a year later in 1957. The Veblens had acquired their land in the 1930s and '40s, next door to Mrs. Pyne, Jr's horse farm on Herrontown Road. At the same time, from 1936-45, Oswald Veblen was busy convincing the Institute for Advanced Study to acquire the 600+ acres that became known as the Institute Woods.

Funding for open space acquisition appears to have come later. The Mercer County Parks Commission had yet to form when the Veblens donated the first 81 acres. Up to that point, Mercer County had developed a golf course in Trenton and received a six acre donation of land near Washington Crossing used by scouts. The Veblens' decision to step up, and the subsequent formation of the Parks Commission, had in part been a response to a survey by the National Recreation Association, which found the county was "generally deficient in all types of recreation and park areas". The county would then point to Herrontown Woods as evidence that it was beginning to address this deficiency.

The 1960s began with the expansion of Herrontown Woods by Mercer County, and closed with the founding of the nonprofit Friends of Princeton Open Space in 1969. DR Greenway was formed 20 years later, in 1989. The private acquisitions in the 1940s and donations in the 1950s formed the core holdings that later partnerships of government and nonprofits would then build upon. The Institute Woods was saved from development in 1997. A substantial portion of the All Saints Church tract was preserved in more recent years by DR Greenway. Due to these successful collaborations, Herrontown Woods is now at the center of a long corridor of open space, with Autumn Hill Reservation to the east and the All Saints and Richiardi tracts to the west.
Posted by Steve Hiltner No comments: 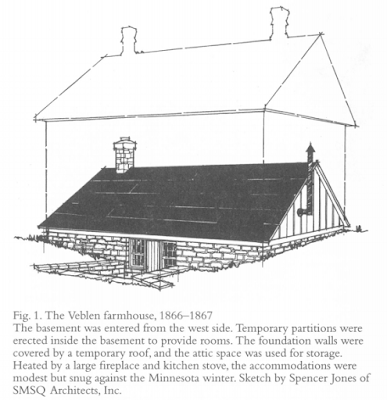 When Oswald Veblen arrived in Princeton in 1905, having completed his PhD in mathematics in Chicago, he may have envisioned American academics much like this representation of the house in which his grandparents and 8 children had spent the winter of 1866 on the Minnesota prairie. For that first winter in what could barely be called a house, they lived in the basement, surrounded by a foundation and sheltered by a temporary roof. A large fireplace stood at one end, a cooking stove at the other, with a well dug in the middle. They made it through the winter, but in Oswald's grandfather Thomas's mind was the two-story house they would ultimately live in. 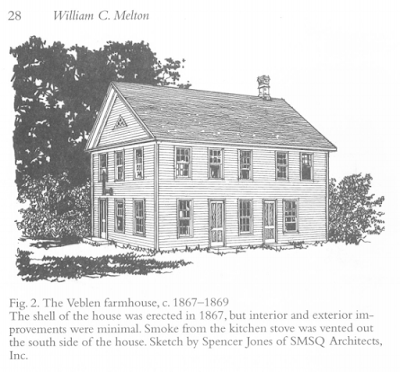 By the time winter arrived the next year, in 1867, Thomas had built the shell of the house, which he would elaborate on until it reached its final form in 1870, ten years before Oswald was born.

American mathematics in 1905 was like a basement on the frontier compared to the glorious universities in Europe that gave Oswald a model for what could be realized over time. Grandfather Thomas built his house in four years. Mathematics in America took longer, reaching parity with Europe and a golden age in Princeton in the 1930s.

Along the way, surely drawing on his grandfather's life spent building a series of four midwestern farms from the ground up, Oswald contributed to the evolution of mathematics, intellectually and institutionally, bringing talented mathematicians together and even designing the building that Princeton's mathematics department and the new Institute for Advanced Study would both call home in the 1930s--Fine Hall. 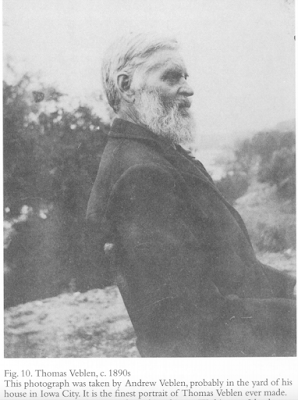 In an article by William C. Melton entitled "Thorstein Veblen and the Veblens", from which these photos are taken, the descriptions of Oswald's grandfather give a sense of an open and flexible mind, a bottomless work ethic, and family generosity. Thomas was "actively interested in innovations." He and wife Kari "were virtual dynamos until late in their lives." Thomas had a "penchant for making continual modifications when these seemed desirable as well as his evident lack of commitment to conventional construction norms-including straight lines, ninety-degree angles, and such things." Most telling, given Oswald's initiative to find a safe haven in the U.S. for displaced European scholars in the 1930s, is a description of his grandparents on the Minnesota frontier as "extremely generous in opening their doors to newly arrived immigrants (including relatives) who needed a place to stay."

Oswald, who had no children, inherited these qualities and applied them to making mathematicians and mathematics his family and his home.