The Origin Story of the Einstein Begonia

An unexpected vein of Veblen-related research began with an email from a friend at the Princeton Public Library asking me to assist in finding a descendent of Einstein's begonia. Einstein had a begonia he was fond of, and after he died his secretary gave cuttings to physicist friends in Princeton. With a little help from the internet, I was able to learn the story of how cuttings from Einstein's begonia have lived on long after his passing in 1955. A friend also gave me some cuttings, two of which I passed on to people involved in creating an Einstein museum in Princeton. 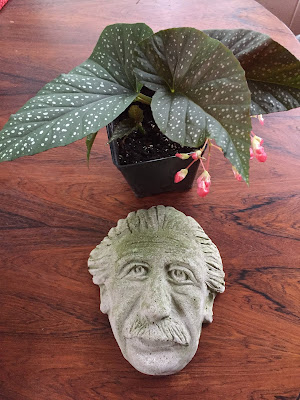 I thought I was done with my work until a Canadian film director named Charlie Tyrell contacted me. He's making a movie called "Show Me the Past is Real," exploring "the emotional power that objects have over us personally and collectively," and would like to find the actual plant--the "mother plant"--that Einstein himself owned. (One of the creative and moving documentaries that Charlie has done, by the way, is called Broken Orchestra, about a citizen movement to get Philadelphia to restore funding for music in the schools. Watching it is eleven minutes well spent.)

The search for the "mother plant" led me back to my friend Vicki who had supplied me with cuttings, to see if she knew the progression of owners through whom her plants had come. She said she'd contact her source.

For a long time, I heard nothing, and then came an email out of the blue from Norma Smith.

My husband and I were walking in the Herrontown Woods near the Veblen house and met you last year, I believe.

My husband AJStewart Smith (83) is a retired professor from the physics department at Princeton University. I was and remain friends with many of the retired physics faculty members and their spouses. The story of the Einstein begonia is as follows:

Mrs. Joan (pronounced Joann) Treiman, the wife of Sam Treiman, a theorist who was a young physics faculty member when Einstein was alive, got a cutting of the Einstein begonia from Einstein’s secretary, Helen Dukas. Joan Treiman gave a cutting to another faculty member’s wife, Eunice Wilkinson. Eunice Wilkinson gave me a cutting and I and my husband (a true gardener) thought the plant was so special that we made many cuttings and started to give cuttings to people who seemed as enthusiastic about the plant as we were. I gave the cutting to Vicky Bergman who was in my aerobics group at the Senior Center, and somewhere over the years we heard even the horticultural department at the university started to call it the “Einstein Begonia”! Joan Treiman died in 2013 at age 87 and I am quite sure she no longer had the plant when she died. Eunice Wilkinson now lives in a retirement center in Boulder, Colorado and no longer has a plant to my knowledge.

We were thrilled to hear what you are doing re Oswald Veblen’s home and the land he donated. My parents were immigrants from Norway and I knew Veblen had Norwegian ancestry so was always interested in stories about him. His uncle Thorstein Veblen had a summer hut on Washington Island, in Door County, Wisconsin; our daughter-in-law’s family lives in Door County and our son and family have a home there so we have made several trips to Washington Island and have read stories about Thorstein’s presence on the island, interesting to look up on google if you don’t already know about them.

Good luck with the wonderful work you are undertaking.

It was astonishing to hear the whole lineage laid out. Historical research usually involves piecing together bits and pieces from multiple sources over time. Another friend's source for Einstein begonias, Martha Otis, contacted me with essentially the same news: the "motherplant is long gone - only cuttings from cuttings from cuttings etc on and on exist."
Thanks to Vicki, Teresa, Martha, and especially Norma for helping trace the lineage of the Einstein begonia back to Einstein himself.
Posted by Steve Hiltner