May Veblen and the Dogwood Garden Club 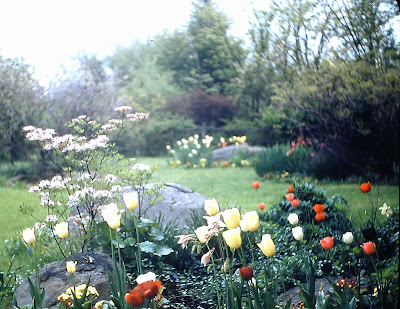 It being May, which happened to be Elizabeth "May" Veblen's nickname, and since May is prelude to June, when we will celebrate not only Oswald's birthday on the 24th but also May's 140th birthday on the 22nd, it's as good a time as any to search for clues as to who she was.
One of the things May did was garden. She grew up in Yorkshire, England, and brought the tradition of English gardening with her, first to be practiced at their home on Battle Road, and then more extensively after they moved to Herrontown Woods in the 1940s. As New Jersey's agricultural era receded, theirs would have been a younger landscape, of fields transitioning into forest, when there were few deer to limit what could be grown among the boulders and split rail fencing that served as foils for the flowers.
An important part of her life appears to have been the Dogwood Garden Club, which she and others founded in 1957, the same year the Veblens donated Herrontown Woods as Mercer County's first nature preserve. If Oswald's health was declining at that point, along with the travel demands of his international career, more time at home may have caused the Veblens to focus more on the grounds around them. This photo is one of the many we believe were taken by Oswald, as he documented their life in such a beautiful, peaceful place.
A portrait of the club back in May's day can be found in the April 20, 1967 edition of Town Topics, back when women still remained hidden behind their husbands' first and last names. Some interesting tidbits relevant to Herrontown Woods were Elizabeth's honorary lifetime membership in the club, the connection between the club and the citizen's committee that was overseeing the Woods, and the group's tending to the "creekside trail"--probably what is now called the yellow trail--where they labeled the plants--a tradition recently revived in the preserve's Botanical Art Garden.
Back then, the club was popular enough that it had to limit its membership to 30, and was fostering an associated group of junior high girls named the Princeton Tiger Lilies. Counting the stereotype of garden club ladies who "just sit around and drink tea, they pointed to the therapeutic power of plants in their outreach work.

By Dogwood Club. Mrs. Charles G. Whinfrey of Mt. Lucas Road, one of the 14 original members of the Dogwood Garden Club, has been made an honorary lifetime member this month. Mrs. Whinfrey has been an active member of the club since its founding in November 1957. The first president, Mrs. Allen Norris is also an honorary member, as is Mrs. Oswald Veblen who with her late husband, Professor Veblen, gave the tract now known as Herrontown Woods to Mercer County. The Dogwood Garden Club is small, limited to 30 active members and 10 associates “so that we can meet in each other's living rooms," according to Mrs. Wesley H. Owens, president.

“The project we are proudest of is the landscaping of the Princeton First Aid and Rescue Squad building on North Harrison Street,” she adds. The work won a $lOO prize in the Conservation and Investment for the Future section of the Civic Beautification Project cosponsored by the Garden Club of New Jersey and Sears. The money was promptly spent to expand the original planting.

Although not all garden clubs have junior groups, the Dogwood Club has sponsored the Princeton Tiger Lilies for a number of years. Limited to 10 girls of junior high school age, the young members "cover just about everything in horticulture and flower arranging," Mrs. Owens says.

The club maintains "Brookside Trail*' in Herrontown Woods, and has identified and labeled the trees and shrubs along the way. "Professor I Veblen was particularly interested in saving the trees on this tract. It is a beautiful area. I wish more people knew about it." Two club members are on the County Park Commission’s citizens’ committee that oversees the Woods.

Last year the club planted a red oak on Arbor Day in the open triangle of land between Route 206 and Mt. Lucas Road, beyond the Princeton Township Garage. This was part of the federated clubs "Project Heart,*’ and was dedicated as a living tribute to all sons and daughters from this community serving in the armed forces.

Members have the same varied interests to be found in all of the clubs. There are specialists in day lilies, iris, roses, bulbs and flowers suitable for drying. A number, Mrs. Owens among them, are interested in the cultivation of wild flowers. Twice a year members hold a plant exchange, and they have sponsored flower shows in 1958, 1960, 1961 and 1963.

"I believe that a lot of people think that garden club ladies just sit around and drink tea." Mrs. Owens comments. “This isn’t so. There’s a great deal of garden therapy work done at the Army Hospitals and state institutions under the New Jersey Garden Club’s state chairman. The purpose of the therapy program is to achieve human conservation through the common bond of flowers--from seed to flower show.

"We have found it so rewarding, even the little bouquets we do for Walson Army Hospital at Ft. Dix. The boys are so delighted. It is a very touching thing how much they appreciate your time."

The Dogwood Garden Club helped restore Elizabeth's gardens at Veblen House after she died in 1974. In 1976, they planted bicentennial dogwood trees all around the perimeter of Princeton Battlefield's north lawn, many of which still bloom today. Maybe that red oak still grows down near town hall. Here's an article about their work in 2006, and a 2013 article described them:

With a mission “to stimulate an interest in gardening, encourage the conservation of plant and wildlife, and take part in community gardening projects,” the Dogwood Garden Club of Princeton has chosen to nurture Horticulture students at Mercer County Community College for decades. 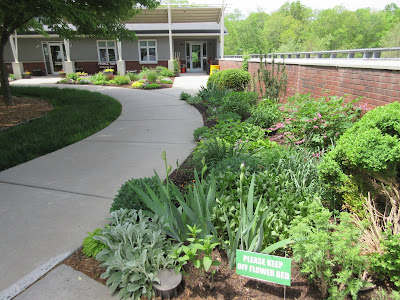 This consistently attractive planting near the Princeton Recreation Dept. Building had a sign saying it was taken care of by the Dogwood Garden Club.

The group has been less active in recent years, and according to a past president, it's not clear if they will regroup after the pandemic. If not, they will have had a good run of 64 years after their inception back in Elizabeth's day.