Making the Grade at Veblen House 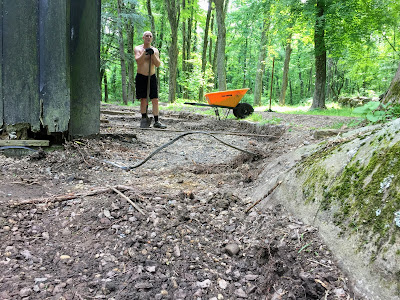 Sometimes, the truth is in the ground, waiting to be discovered. While awaiting permission to restore the house itself, we have been restoring the original grade around the house, an important step as the slope of the ground determines whether rainwater runs towards the house or safely away.

Aerial photographs from the 1930s show bare ground in the shape of an oval where the house was being built by wealthy and unconventional Manhattanite Jesse Paulmier Whiton-Stuart. It took awhile for us to notice, but there are two ovals around Veblen House--one an oval of stone, the other an earthen berm that used to include a split rail fence. They may have had aesthetic or sentimental value for Whiton-Stuart--a lover of horses who may have enjoyed the idea of living inside a corral--but they also can serve to deflect runoff away from the house. All this circularity must have appealed as well to geometer Oswald Veblen when he and Elizabeth bought the house in 1941. 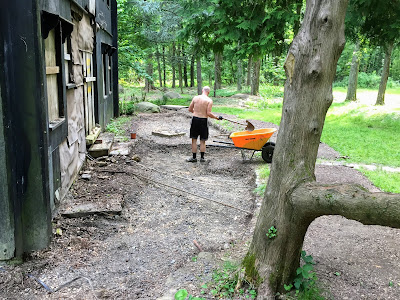 Long after the Veblens were gone, gravel was added around the house, probably in the 1980s. It may have served a purpose at the time but raised the ground level up to the wooden siding, making the house appear to be too low compared to the surrounding ground. A 2011 Mercer County study called for the house to be raised, at considerable cost.

Our approach has been instead to lower the ground to its original level. It may well have been my third grade teacher who planted the seeds of this logic, when she told the story of a big truck that got stuck under a bridge. There the truck remained while grownups puzzled over what to do. Raise the bridge? Cut the top off the truck? Nothing seemed to make sense. Then a boy happened by, saw the poor truck that couldn't go forward or back, and quietly suggested, "Why don't you let the air out of the tires?" That's the power of stories for you.

Most of the work has been done by Andrew Thornton, a local handyman who loves to work with stone and ground to build trails and raingardens. 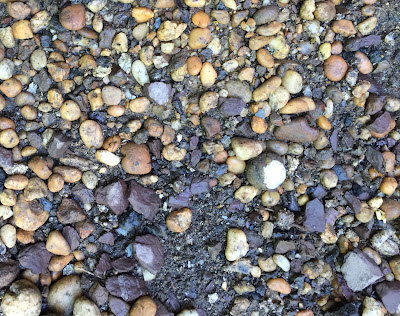 As he dug through the layers around the house, he discovered a progression of stone, the prettiest of which was the deepest and likely the original. 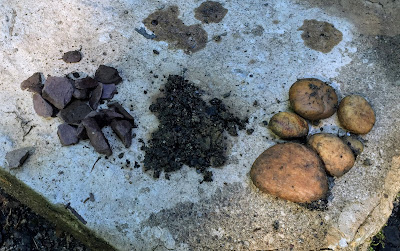 A reddish stone gravel was on top, with a gray rough sand underneath, and the yellowish pebbles below. 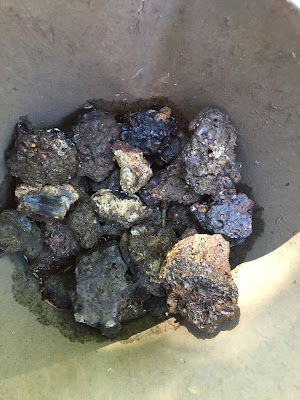 Mixed in are clinkers, or slag, from the days when the house was heated with coal. 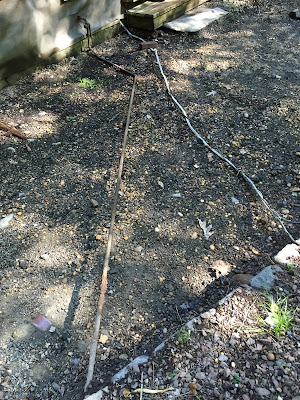 Digging down through the extra gravel has exposed an old gas pipe, which fed gas into the house from a tank, and an electrical wire leading to the garage. 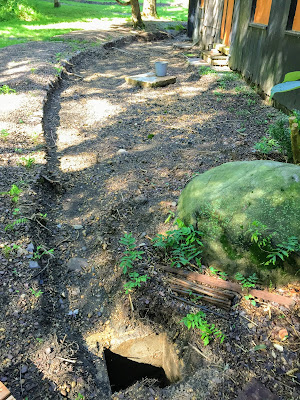 Now that water can flow once again away from the house, Andrew was digging a route for it to escape the inner oval when he came upon an old concrete drain that had long been hidden ten inches underground. Andrew's instinct about where the water should flow proved to be the original owner's as well. 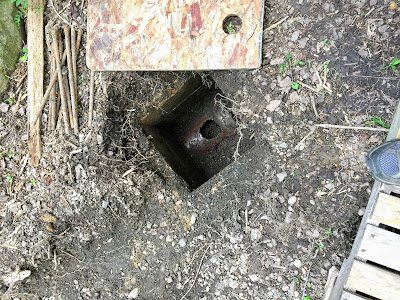 The drain feeds into a pipe that is part of an elaborate system meant to keep the house dry despite its low position in the landscape.

We had a similarly serendipitous experience while restoring another part of the stone wall. Deciding to build steps leading up through the wall, we began digging out a spot for the steps when we encountered big stone steps already in place, hidden just a few inches underground. 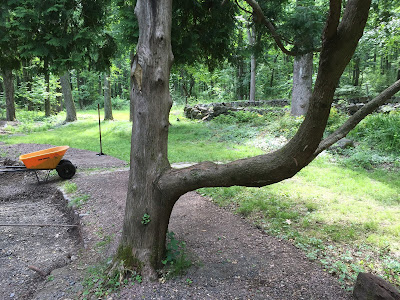 Anyone who read The Great Escape, about POWs who secretly dug a tunnel to escape a concentration camp during WWII, knows that all the excavated material needs a place to go. The red gravel has become an oval walkway around the house that will divert surface runoff away from the foundation. 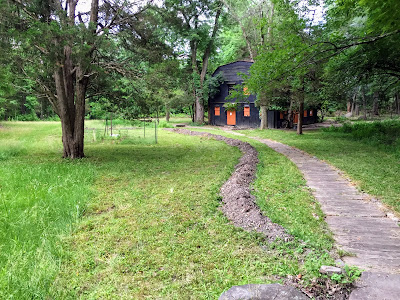 The gray sand has become a berm to catch runoff coming down the slope and use it to feed a raingarden. 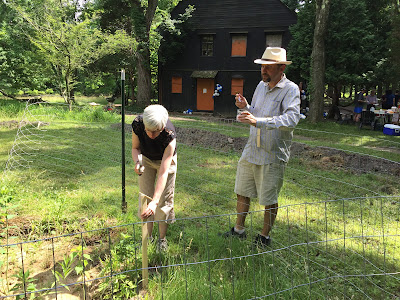 Plant labels will help our species get acquainted with the raingarden's species. 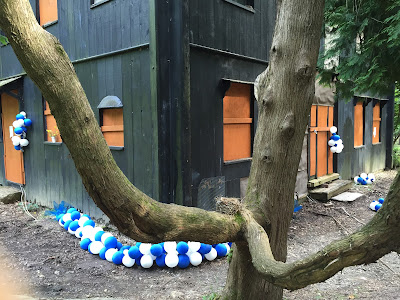 The excavation and redistribution was completed in time for the June 24 picnic to celebrate Oswald Veblen's 138th birthday.