Buildings, Trail Trees, and a Sense of Place

(First posted at PrincetonNatureNotes.org)
Sense of place is the theme for this year's Princeton Environmental Film Festival, which begins its three weekend stand at the public library this Thursday. In adapting that theme to my presentation about the mathematician/visionary/outdoorsman Oswald Veblen, on the last day of the festival, I followed a trail of thoughts that led surprisingly to my birthplace near Lake Geneva in Wisconsin. The thoughts took this cross-country route: 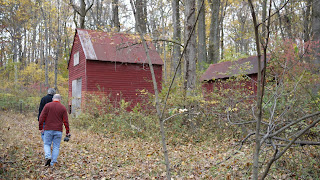 Walking the boulder-strewn slopes of Herrontown Woods in northeastern Princeton, it's easy for those who haven't learned the trails well to get lost. Detours around the many storm-blown trees make it even harder to keep one's bearings. Several of the trails, though, converge on a 19th century farmstead where Veblen had his study. Out with my family recently, not completely sure of where we were in the preserve, I was relieved to finally catch sight of the red barn in the distance.

Across town, the house and restored dams at Princeton's Mountain Lakes Preserve serve the same role, as a reference point for walks in the woods.

The houses that often come with preserved land, then, do not necessarily detract from the natural setting but instead provide landmarks--a sense of place, a feeling of departure and return. Historical structures add even more to a natural area, endowing a spot with a story and an added dimension of time.

Sometimes fictional stories have particular power, such as the belief that Veblen's study had actually been lived in by Einstein.

The opposite of this, a spot with no sense of place, no stories to tell, might be a deep, flat woodland without any boulders, streams or other features to distinguish one direction from another. 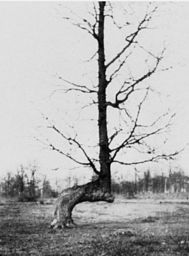 This led to the memory of so-called trail trees--the trees American Indians would bend over, forcing the saplings to grow sideways and up in a distinctive shape, to mark a little used trail or the direction to a water source. White oaks, which can live for hundreds of years, were commonly put to this purpose.

The tree in the old photo is shown in a wikipedia post describing a series of trail trees that once led north from what is now Illinois up to Lake Geneva, Wisconsin, which happens to be where I grew up. 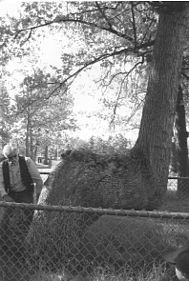 Another photo on that webpage showed a trail tree in Traverse City, Michigan, close to Camp Innisfree, where I first developed an interest in learning wildflowers and improvising melodies on clarinet. Whether this trail tree still survives, it's still doing its job, helping navigate to places of great meaning in the deep forest of memory.
Posted by Steve Hiltner No comments:

During his life, Princeton mathematician and visionary Oswald Veblen made the case for many things that may have seemed farfetched. In the early 20th century, he dreamed of American academic institutions gaining parity with the European universities dominant at the time. His ideas about how to house and promote mathematical research were incorporated into Princeton University's Old Fine Hall and the Institute for Advanced Study. He argued in favor of the Institute acquiring lands that later became the Institute Woods. What is remarkable is how he was able to gain the support and funding necessary to help bring these dreams into reality.

The Veblens had a dream for the house and farmstead they left to the county back in 1974, but its rather sketchy. (On February 10, on the last day of the Princeton Environmental Film Festival at the public library, I'll present a talk on the Veblen legacy and the house they left to the public trust.) A "library and museum" are mentioned in their wills, and their wish for the land they donated with the buildings, Herrontown Woods, emphasizes providing a place where people can experience and learn about the woodlands.

For some reason, the county did not follow up on the Veblens' expressed desires, rented the house instead, then closed the house altogether in 2000. Given this voiding of original intent, the abandoned house and farmstead at the edge of Herrontown Woods have attracted many dreams to flesh out what the site could be used for. The pieces of that composite vision range from the practical to what seems like the farfetched. Most of the ideas have to do with changing the way we see the world and live within it, but when demonstrating a different approach to life, what's practical and imperative for one person sounds farfetched for another. 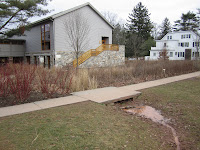 In a recent visit to Willow School, about an hour north of Princeton, I had a chance to see some of the pieces of the composite vision for the Veblen site applied to a school that hosts students from preschool through middleschool.

Pieces of that vision include:

Farming and History Near Veblen House 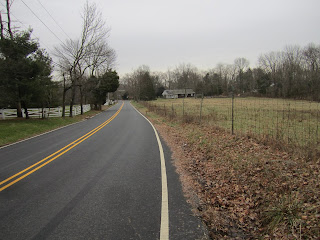 Looking down Herrontown Road from the driveway to the Veblen House, five acres of land in farm easement lie on either side. The Veblen House and cottage are located in a part of Princeton originally called Herringtown, whose many small 19th century farms contrasted with the larger farms elsewhere in Princeton. Apparently, the name comes from the practice of bringing wagon loads of herring back from the coast to fertilize the fields. Fertilizer was a big deal back before they started manufacturing nitrogen fertilizer from fossil fuels. 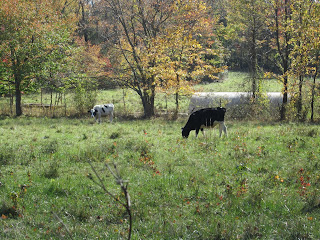 The October, 1981 Princeton Recollector newspaper featured an article on the microfarming in this area of eastern Princeton, written by Jac Weller, whose farm is now Smoyer Park. The interest in saving the Veblen House includes an interest in bringing back some of that farming tradition. Currently, the owner of five acres in farm easement on the west side of the road, who previously managed Jac Weller's farm, still grows a couple head of cattle every summer. Quonset huts can be seen in the distance. 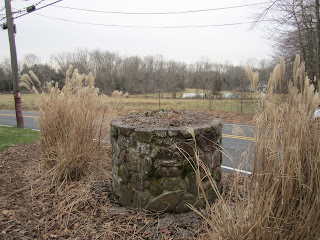 On the other side of the road, just down from this well, the other five acres in farm easement includes a historic horse stable once used by the Pyne family back when they lived at Drumthwacket, which is now the official residence for the governor of NJ. They'd come across town to ride their horses along the Princeton ridge.

Historic Structures at the Veblen Site

This post contains an informal inventory of the structures the Veblens donated to Mercer County, to be used to complement the 95 acres of open space they also donated, known as Herrontown Woods. The structures have been empty for many years, but the roofs have protected the interiors to some extent.

The Veblen farmstead is really two separate sites next to each other. What is known as the cottage, acquired by the Veblens in 1936, is actually a farmhouse dating back to the 1870s. On a map of the microfarms in the Herrontown area of eastern Princeton, it is labeled as the Dauer farm. Local legend has it that Einstein once lived here. More likely is that he was a frequent visitor back when Veblen used the cottage as a study. There's also a story, told to me by a woman whose ancestors rented the cottage back in the 1930s, that her great grandmother would occasionally see Einstein strolling by, and invite him in for a sandwich. 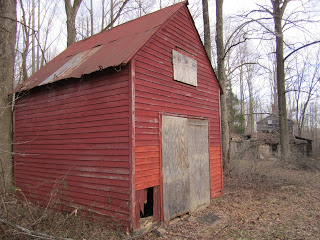 A small barn still stands near the cottage, kept in decent shape by the tin roof. 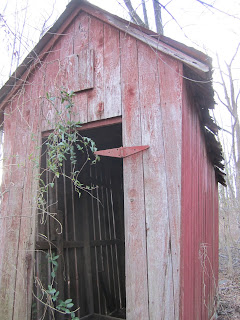 Next to the barn is a small corn crib, which in this photo looms much larger than it is. 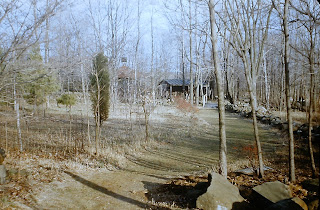 Here, in three photos from the 1950s, one can see how the two homesteads connected. Heading from the cottage down a short path through the woods, following along one of the many stone fences left from the farming era,

one would have encountered these intriguing structures standing next to the Veblen House. On the left is a hay barrack, a structure whose design may have originated in Holland and spread to other parts of Europe. The roof is designed to rise and fall on the four corner posts, to accommodate hay as it was stacked. You can see how the four corner posts extend up through the roof, which slides up and down on them. Very few remain in the U.S., and this one was torn down by the county in 2008 or so.

The metal structure on the right is a dove cote, meant to house pigeons. Whether the pigeons were for eating--a delicacy--or for carrier pigeons is unclear. I've heard that the dove cote was likely installed not by the Veblens but by the previous owner. A recent article describes the historic and possible future uses of carrier pigeons in the French army. It would be interesting to know if the Veblens used the dovecote, and if the past use of carrier pigeons in the military might have given it special meaning for Oswald, who used his mathematics and leadership skills to improve the U.S. military's ballistics during the two world wars. 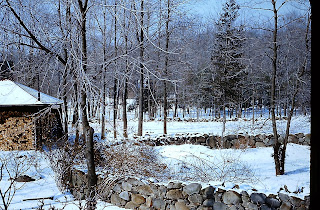 Just behind where the hay barrack stood, shown here in another photo from the 1950s,  is a circular wall, about 50 feet across, built of large stones. (Beyond the circle is where a barn once stood.) 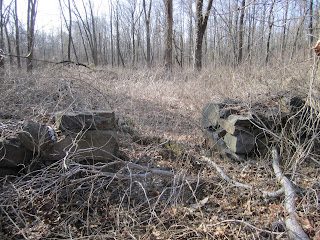 The stone wall must have been well built, given that it has kept its form all these decades, though now grown over by Elizabeth Veblen's still-thriving wisteria vine. There are two openings into it, at roughly "one and three o'clock", if the circle were a timepiece. 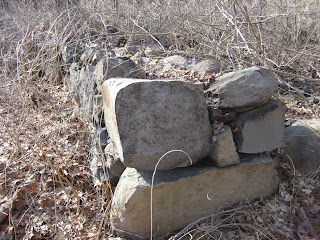 An internet search yielded something called a "sheepfold", which is described as one of the oldest types of livestock structures. According to an entry in Wikipedia, "In British Engish, a sheep pen is also called a folding, sheepfold, or sheepcote." My understanding is that the Veblens built it. Elizabeth may have used it for growing a garden. 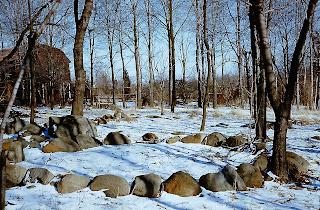 This 1950s photo shows another circle of stones, unstacked, which I've been told is a funerary circle where the Veblens' ashes may have been placed. The Veblen House is in the background. 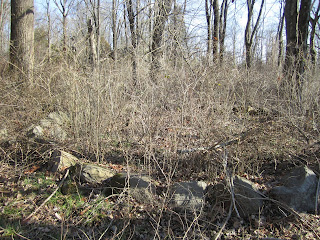 Thanks to the above photo, I was recently able to find the circle amidst dense invasive shrubs. 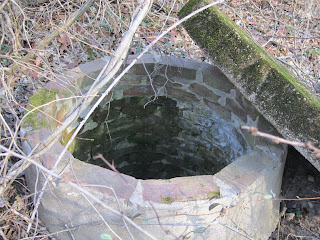 Also hard to reach through all the fallen trees and dense undergrowth are a couple wells, with water still visible in the bottom, located south of the house. 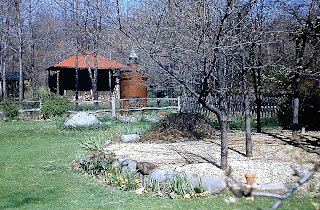 Continuing the theme of stone circles, the Veblen House, too, was surrounded by an oval of stone, reminiscent of an Ark. The 1950s photo shows the southern end of this oval. 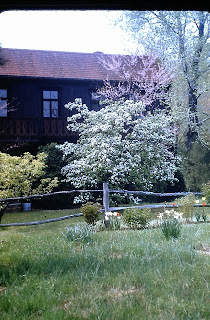 The Veblens had quince trees planted around the house, and this photo from the 1950s may show one of them in bloom. The redbud behind it still stands.
Posted by Steve Hiltner No comments: