This isn't the sort of discovery that will float everyone's boat, but it relates to a subject as profound as the most daunting enigma of mathematics or physics. Nature mastered the nutrient and carbon cycles long ago. If we're so smart, why haven't we? In nature, there is no such thing as waste. Everything is utilized, while our stubbornly linear economy leaves pollution and trash in its wake. As brilliant minds unlock the secrets of the universe, persistent questions on earth go unanswered.

A couple weeks ago, after yet another spring rain had left the Veblen House grounds even more saturated than before, it occurred to me that this would be the perfect time to explore how the Veblen House used to deal with nutrient cycling. Word had it that there was a septic tank somewhere on the grounds. They usually are buried a foot or so down, which requires probing the ground with a metal rod. With the soil so soft, a metal "tree feeder" worked well enough. You push it in here and there, hoping to encounter something solid. Someone with a good ear and feel can tell if it's a septic tank or a rock. Things start getting definitive when one makes multiple probes several feet this way or that and finds the same obstruction at the same depth. Once the tank's extent is determined, it's time to start digging. 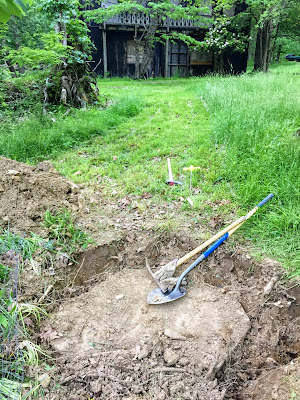 That's what I did, and this is what I found, with the digging assistance of friend Andrew. The shape, though, was different from a normal septic tank--round rather than rectangular--and though the lid is concrete, the underlying tank itself appears to be made of brick and mortar. It appeared to be an antique form. 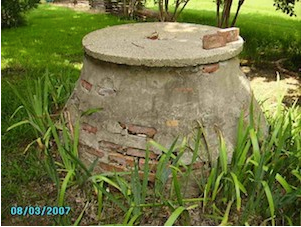 A likely likeness was seconds away on the internet. Type "septic tank history" into google, and this image pops up, along with a brief history of the septic tank.

A Frenchman named Mouras built the first one back in 1860. What may come as a surprise is that after ten years of use, he opened it up and found almost no solid waste. This fits with what I've heard about composting toilets, and also about the way we metabolize food. Our internal combustion is a magic show that turns solid fuel into invisible carbon dioxide gas. Much of what began as food escapes as "exhaust" each time we exhale. Run a 5K and you'll likely find yourself lighter, primarily from burning energy and breathing. We are made mostly of oxygen, carbon, hydrogen and nitrogen--all elements that come from the air. "Dust to dust" may be a memorable saying, but there is very little of the earth in us, or what we leave behind.

There are other structures on the Veblen grounds that suggest an even earlier version of a septic system. It's not clear if the latest find was still in use when the house was last occupied, or if a more modern version is buried somewhere nearby. Figuring out how all of these functioned will tell a story that continues to this day, as humanity struggles to emulate nature's marvelously sustainable cycling of nutrients and carbon.

There's always hope on the horizon, as an Australian company that's changing the world "from the bottom up" offers a composting toilet to replace chemical porta-potties in Australia, and a few options exist on the fringes of the linear economy in the U.S..
Posted by Steve Hiltner