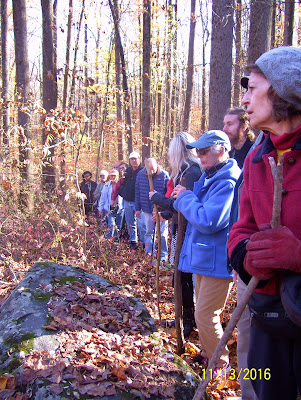 After a traumatic campaign season and startling conclusion, many of us took to the light--filled Herontown Woods the following Sunday, Nov. 13, to experience the restorative powers and sanity of nature. 35 of us walked the yellow trail, which passes by some of the finest features of the preserve. We found that, despite the seismic political changes afoot, trees continue to grow, the water flows, 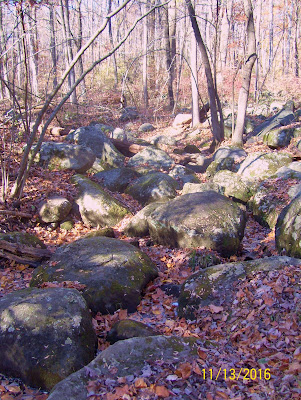 and boulders give a sense of firmament in an unstable world. 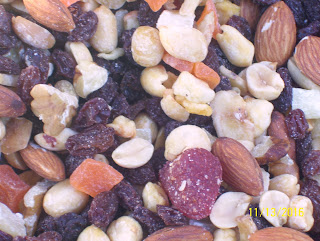 Most of these photos--the ones with a date stamp--were sent to me afterwards by CW. At first, I thought this one was of pebbles in the stream. 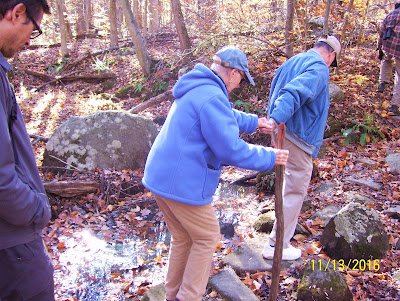 On a nature walk, there's time for kindness, and working together to overcome obstacles. 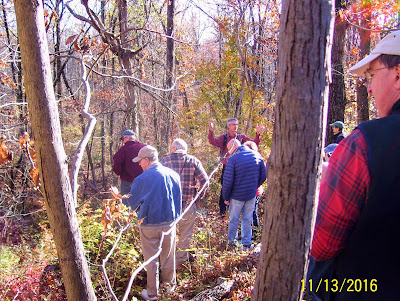 There was time to point out all the habitat restoration work our Friends of Herrontown Woods nonprofit has been doing, and how the deer, in a rare collaboration, have been nibbling down the resprouts on the winged euonymus shrubs we cut. No deer have as yet come forward to join our board, however. 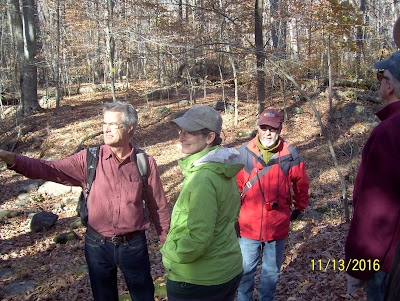 I pointed out how Herrontown Woods, Princeton's first dedicated nature preserve, dating back to the Veblens' pioneering donation of 82 acres in 1957, connects to other more recently acquired properties, including DR Greenway's All Saints Church tract just to the west. 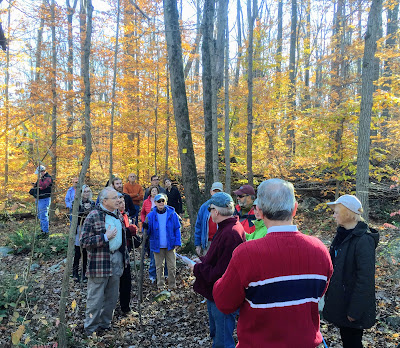 One of the participants, Ed Simon, shared a couple stories, including how farmers in this part of town would bring herring from the coast to fertilize the less than optimal soil. The resulting smell led to the name Herringtown for this northeastern part of Princeton.

The odor is long gone, but rock walls dividing the fields can still be found among all the trees that have grown up since, and what we call the Veblen cottage was one of the farmhouses, dating back to 1875. 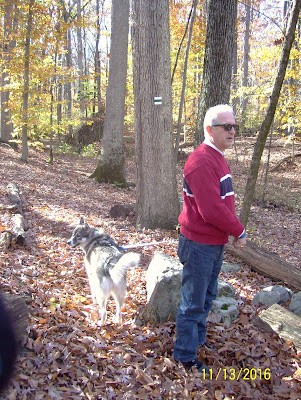 Ed leads the informal Friends of Gulick Park group, which maintains and improves trails in the Gulick Preserve, on the other side of Smoyer Park from Herrontown Woods. He also told of the forest village that appeared in Gulick Preserve this summer, built by teenage girls and based on Narnia. 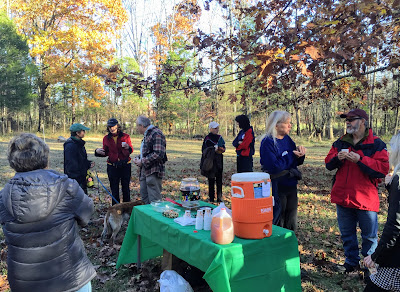 After the walk, many of us gathered next to the Veblen House for cookies, cider, conversation, 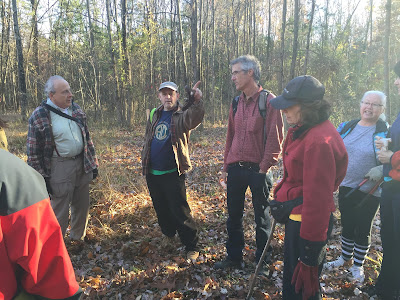 and a visit to the pawpaw patch we planted January 3rd, just down from the Veblen House. That's board member Kurt Tazelaar pointing off into the distance, likely towards other areas of the grounds that we're in the process of restoring.

Thanks to all who came out and shared company, spirit and insight to make it such a rewarding walk on a beautiful Sunday afternoon.