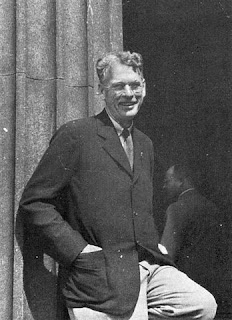 Here's a link sent to me by a friend, compiling biographical information about Oswald Veblen (1880-1960), including his birthplace, publications, some correspondence, and obituary.
Posted by Stephen Hiltner No comments: Links to this post

This from page 50 of A Beautiful Mind, the book about John Nash:

"Designed by Oswald Veblen, a nephew of the great sociologist Thorstein Veblen, it was meant to be a sanctuary that mathematicians would be "loath to leave.""

And from a page on the Princeton University website:

"Veblen was instrumental both in envisioning the Institute before the circumstances led to its creation as well as in the design of Fine Hall and in the initial selection of members for the Institute."

"In the 1930s, a remarkable mathematical community was born in a building built specifically to house such an unusual community: Fine Hall at Princeton University (now Jones Hall, reverting to the donors' names with the construction of the new Fine Hall and Jadwin Physics complex in 1970). The Mathematics Department of Princeton University, then emerging as a world class center for mathematics, shared its new quarters with the Department of Mathematics of the Institute for Advanced Study for six years while the latter's facilities (Fuld Hall) were planned and constructed nearby. During this period, the beginning of which saw the arrival from Europe of Einstein and Gödel, Fine Hall served as a mathematical club in which graduate students, faculty, Institute members, and many visitors mingled together in an atmosphere of exchange, including close ties with the adjoining Palmer Hall and its physics community, including some joint members of both the math and physics departments."

The old Fine Hall is located next to the Frist Center on campus.
Posted by Stephen Hiltner No comments: Links to this post