When the Bottum's at the Top: Clues to Veblen House's Making

There are many times, in the restoration of Herrontown Woods, when the right person showed up at the right time. The story of the gazebo in particular has instances of uncanny arrivals. As the summer of 2021 wore on, we were starting to wonder, in this pandemic era when so many people are remodeling their homes, how we'd ever find a professional carpenter with time and inclination to work on the Veblen House. It came to mind, though, that builders of theater sets might still be in a lull, and so I reached out to our past board member Perry Jones, who has contacts at McCarter Theater. Word was passed along, ultimately leading to a fortuitous email arriving in my inbox. 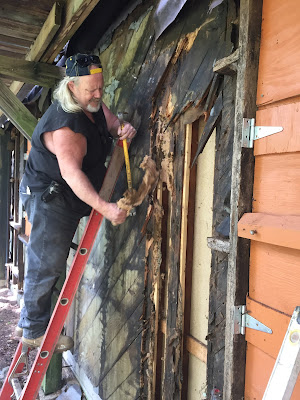 Enter Robb Geores, a carpenter who had worked at McCarter Theater off and on for decades, as well as the Metropolitan Opera in NY, and has restored Victorian buildings in Cape May.

Robb has been working on Veblen House for a month now, and he is proving to have a remarkable eye for detail. In the process of rebuilding the east wall, he has been finding lots of clues to how, and how well, the house was constructed. 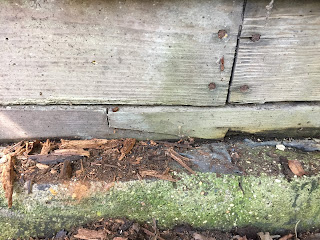 For instance, how the sills that run along the bottom of the inside walls are locked together. The house is a prefab, apparently not made by Sears or any of the other more common makers of kit houses early in the 20th century. 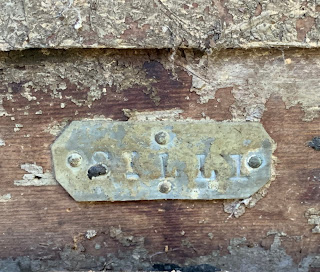 Many parts of it, however, appear to have been made in a factory, and stamped to identify where each part goes. There's sill #1, sill #2, etc. 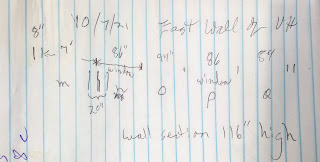 The house has an inner and an outer wall, and on the east side, the outer wall suffered considerable water damage during the house's two decades of neglect. Taking the outer wall off, like a scab, has revealed the inner wall that actually bears the weight of the house. It is made up of five panels, manufactured in a factory, shipped by rail from Morristown to Princeton around 1930, and assembled on site. The large, squarish panels are labeled "m", "n", "o", "p", and "Q", each 116" high, with varying widths, depending on whether they contained a window. 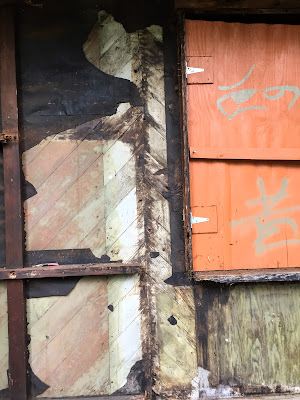 Each panel has diagonal boards on the outside that provide rigidity. 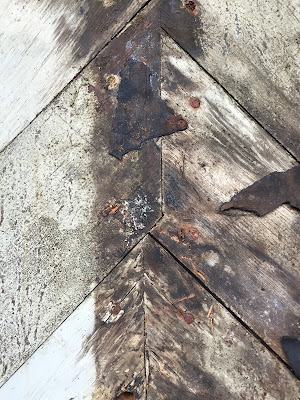 The panels butt up against each other in a special way, with a notched border. You can see how tightly the house was constructed. 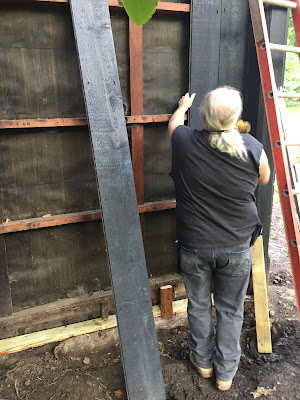 On the better preserved sections, you can see the thick layer of tarpaper that coated the inside wall. 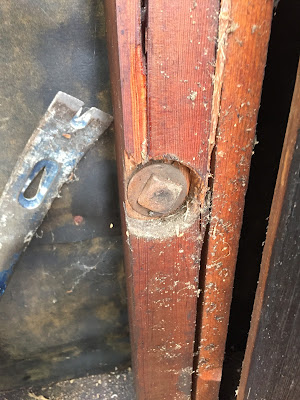 Against the tarpaper was then bolted the frame for the outer wall, 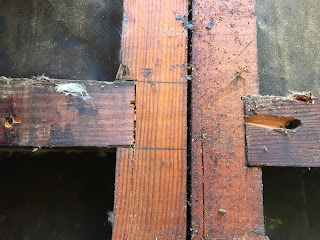 its 2x4s expertly notched. The panels of the outside wall were bolted together and then covered with an early form of housewrap called Sisalkraft.
On the last outer panel, "Q", Robb found some writing that looked like "Bottom."

He took a closer look and saw that it was spelled "Bottum." Since the word was on a board at the top of the panel, he first figured that the word was mispelled and that the panel had been installed upside down. But the house is beautifully constructed--surely not by the sort of person who would hastily misspell a word and put a panel in upside down. More likely, that person, reaching the last panel, with a taste for fun and irony, would have scrawled his name, Bottum, on the top.

Googling "Bottum" led to a history of the name's origins in the York area of England, where coincidentally Veblen's future wife, Elizabeth Richardson, had lived before moving to Princeton.

"Bottom", of course, is a memorable character in Midsummer Night's Dream, which we'd love to stage on the Veblen House grounds.

The eye of man hath not heard, the ear of man hath not seen, man's hand is not able to taste, his tongue to conceive, nor his heart to report what my dream was. I will get Peter Quince to write a ballad of this dream. It shall be called 'Bottom's Dream', because it hath no bottom.

And when Peter Quince is done writing that ballad, maybe he'll help us replant quince trees in front of the Veblen House, where they were still growing when I first encountered the house back in 2008.

Another interesting potential clue to the house's history came while Robb was waiting for the traffic light to change, up at the intersection of Snowden and Nassau Street. 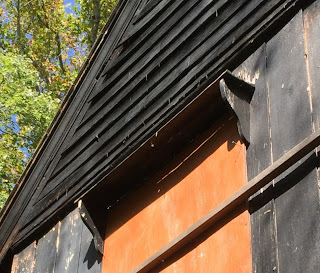 The Veblen House has these distinctive hoods, or "eyebrows", over some of the windows, basically a board held up on each side. 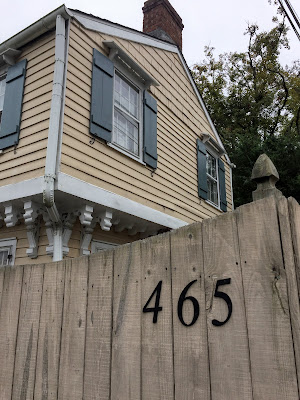 The slow traffic light gave Robb time to check out a house at the far corner of the intersection, and he noticed that 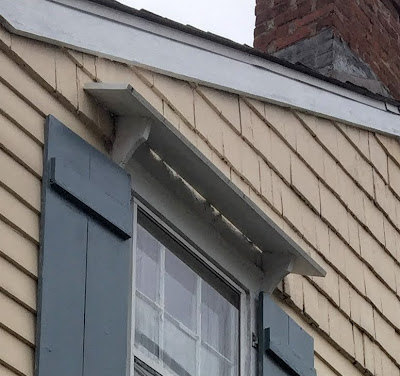 the house at 465 Nassau has the same eyebrows over some of its windows.
My first thought was that the intersection of Snowden and Nassau has special significance connected to Oswald Veblen. It was Henry Fine who, as Dean of the College under Woodrow Wilson, brought to Princeton University Oswald Veblen and other young scholars to be preceptors. Veblen and Fine worked closely over the next two decades, with Veblen ultimately becoming the Henry B. Fine Professor in the mathematics department.
Henry Fine's brother had founded a Preparatory School on the corner of Snowden and Nassau, and in 1928, riding his bicycle to visit his brother, Henry Fine was struck by an automobile and killed at that intersection. Soon afterwards, Oswald Veblen led the effort to design and build the glorious original Fine Hall (now called Jones Hall) to house the mathematics department. The building, funded by a close friend of Fine's, became the world's premier center for mathematics, housing not only mathematics but also the Institute for Advanced Study in its first years, as Einstein, von Neumann and other great European scholars moved to Princeton to escape persecution by the Nazis.
The powerful connection of this intersection to Veblen's world now has an architectural dimension as well. The story is told that the Veblen House's custom features were added by a Russian woodworker. Maybe that woodworker left his mark on other houses in town as well.
Posted by Steve Hiltner No comments: