Writers Stephen Dixon and E.B. White, and the Veblen Cottage in Brooklin, Maine

This time of year, as summer loses its hold on the land, people of means or circumstance return to Princeton from their summer retreats in the north. Through coincidence or serendipity, the story of Veblen House, and the profound meaning a homestead can have in people's lives, will head the opposite direction: north from the unexpectedly endearing vulture family perched on a farm cottage in Herrontown Woods to the town in Maine where a beloved spider named Charlotte once lived. There were many spiders weaving their webs on E.B. White's farm in Brooklin, Maine, but Charlotte became singularly famous for making the leap into White's imagination, and coming to life in the story he weaved.

E.B. White's farm overlooking Allen's Cove in northern Brooklin, with Arcadia National Park rising in the distance, is for sale. For properties with special histories and owners, like E.B. White's farm or, as we'll see, the Veblen's seaside cottage 5 miles to the south, a change in ownership, like the change in leadership of a nation, is fraught with peril. Will a house's special charms be preserved, or be lost to neglect or gentrification? Both E.B. White's farm and the Veblen's cottage in Brooklin came up for sale in the mid-1980s. Veblen's cottage at the time was being rented out in the summer to the writers Anne Frydman and Stephen Dixon, who loved the cottage like E.B. White loved his farm. How E.B. White's farm fared since being sold in 1986, perhaps aided by its historic designation, is described in this article in New England Today. The trajectory of the Veblen's Maine cottage is described in the correspondence I had with Stephen Dixon, below.

The Veblens would journey north from Princeton each summer to their rustic cottage on Nasqueg Point in Brooklin. They had discovered the area through Elizabeth's sister and brother in law, Charlotte and Clinton Davisson, who had bought a house there. Beginning in the mid-1960s, with Oswald gone and Elizabeth getting up in years, the cottage stood empty for about ten years, until poet and translater Anne Frydman found it and convinced the Veblen's niece Elizabeth Davisson to let her rent it.

From 1979 to 1986, Anne and her husband, writer Stephen Dixon, spent their summers there, surrounded by the simplicity and soul of the cottage, and breathing what must be the most delicious ocean breezes. As Stephen describes in his emails to me, he and Anne left everything in the cottage just as it had been when the Veblens lived there--the formidable cooking wood stove, the bookshelf of Ulysses, Conrad and Yeats, the antique clocks, even the Veblen's spicerack, with spices long since hardened in their jars. The cottage was "too beautiful to change", even the curious combined toilet-shower accessed from the patio (knowing about it adds extra meaning to a similar toilet-shower combination in the Veblen House). 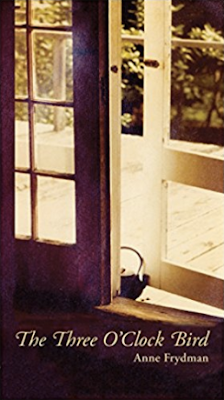 Like E.B. White's farm, whose barn and animal life found its way into Charlotte's Web, the Veblen's cottage in Maine found its way into stories Stephen Dixon wrote while living there. He sent me a list, which I'll include here further down, and the cottage shows up in photos on the front and back of a book of Anne Frydman's poetry, published posthumously in 2016, The Three O'Clock Bird.

There are many characters in the story of Veblen House, and not all of them are people. Some are animals, others are plants (the writer of the story being a botanist), and a number are the buildings themselves. Along with the Veblen House and the Maine cottage, there was, and still is, the cottage in Herrontown Woods that began as a farmhouse in 1875. Both cottages were unwinterized when the Veblens owned them, with two chimneys and a large cooking stove.

Brooklin, as described on its wikipedia page, sounds like "Herrontown North". Fish fertilizer was used to make the rocky ground productive, and back in the 1880s, around when Veblen was born in Iowa, the town of Brooklin was known for its smoked herring. All this can also be said of northeastern Princeton, which was originally known as "Herringtown". Is it chance that a man whose grandparents had come to America from Norway would be drawn to rocky landscapes and live his summers with a view eastward across the Atlantic?

In our work to save and repair the Veblen House and cottage in Herrontown Woods, there's been discussion of whether it's worth saving the cottage, which is in considerable disrepair. Veblen bought it in 1936, and used it for his study. Now it is unique in Princeton, a small, simple but well-built farmhouse, made both vulnerable and enchanting by its isolated setting surrounded by woods. 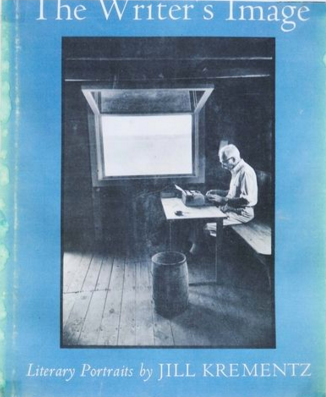 Both E.B. White, writing at a simple bench he built in a converted boathouse, and Stephen Dixon's descriptions below, speak to the affection people can hold for simple but elegant shelters. E.B. White's favorite book is said to have been Thoreau's Walden. Less can be more, and the cottage in Herrontown Woods can be an enduring reminder of a simpler past if we are able to save it. 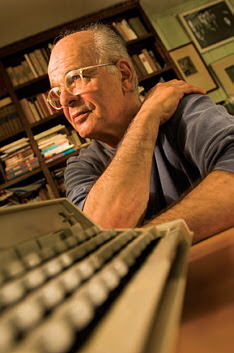 I learned of Stephen Dixon and his 8 years residency at the Veblen cottage in Maine through Jane Smith of Charlottesville, Virginia, a good friend of the Veblen's niece, namesake and sole family heir, Elizabeth Davisson, who inherited the Veblen cottage when Elizabeth died in 1974. Stephen taught in the Writing Seminars program at Johns Hopkins for 26 years, and over the course of his life has written more than 500 short stories and 15 novels, two of which were nominated for the National Book Award.

During the summers they spent in Brooklin, the Veblen Cottage found its way into their hearts and into their writings. After a lifetime of writing on a manual typewriter, Dixon's hands overpower a computer keyboard, like a steam engine casting sparks of collateral letterage as he types his emails. The collateral letterage has been edited out, the better to appreciate all he has to tell.

Of note in the correspondence is what he heard about Oswald (that "he got his best ideas chopping wood"), the gradual memory of the special kind of tea the Davissons drank (lapsang souchong, which is truly distinctive and delicious), the mention of caretaker Stan Gray (who served in Maine as Max Latterman served at the Veblen House), and Stephen's deep appreciation of the cottage's charm and simplicity. There is a mix of joy and sadness. While the Veblen's farm cottage in Herrontown Woods suffered from neglect after it was donated to the public trust, the Veblen cottage in Maine experienced the opposite when it was sold in 1986--a gentrification that preserved the cottage while sacrificing the qualities that the Dixons had found so appealing.


The correspondence can be seen by clicking on "Read more".