Clearing (Around the) House 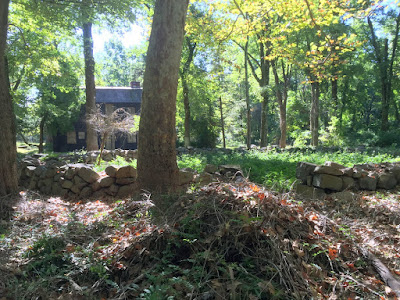 Friends of Herrontown Woods board members Kurt and Sally Tazelaar have been doing lately what few of us imagined possible. The stone features that once graced the grounds around the Veblen House, long obscured by thick, intimidating stands of invasive winged euonymus, privet, honeysuckle, wisteria, and multiflora rose, are now becoming visible again. Boulders in the garden near the house, the large round "horse run", the 75' by 30' footprint where a barn once stood, a rock wall left over from a farming era--all can be seen again as the pleasing vistas of this wooded site are opened up.

One can begin to see what drew the Veblens to this location, and the pleasure Einstein and others took in visiting.

I recently attended a committee meeting in Princeton where people expressed pessimism about ever winning the battle against invasive species that crowd our nature preserves with inedible foliage. Because wildlife depend on native plant species for food, the dominance of non-native invasives effectively shrinks the functional acreage of habitat Princeton worked so hard to preserve.

Kurt's and Sally's work supports a more optimistic view. Kurt views the Herrontown Woods preserve not as passive open space, but as a gym where he gets his very active daily workout, wielding a saw and a pair of loppers to cut down invasives. With this sort of thinking, he sees habitat restoration not as an occasional workday, but as a way of life that keeps him fit and rewarded with a deepening sense of accomplishment. The invasive plants grow 24/7, so an effort to counter them must emulate that persistence.

It is this sort of example, that feeds optimism and empowerment in an era where problems seem to grow beyond our capacities to respond, that is the most rewarding aspect of our work to restore the Veblen House and grounds.
Posted by Steve Hiltner No comments: