An Ice Rink and Other Sculptures at Herrontown Woods

It was a sense of mission that caused us to venture into Herrontown Woods on a windy winter's afternoon so cold my hands were freezing up after just a few camera shots. But as often happens, once we got out there, we found plenty to appreciate. There were the tawny leaves held tight by beech trees, contrasting with the snow in the bright afternoon light. The snow we thought would slow our way had already been packed down by neighbors walking their dogs, and ground often wet in spring and summer was conveniently frozen hard. 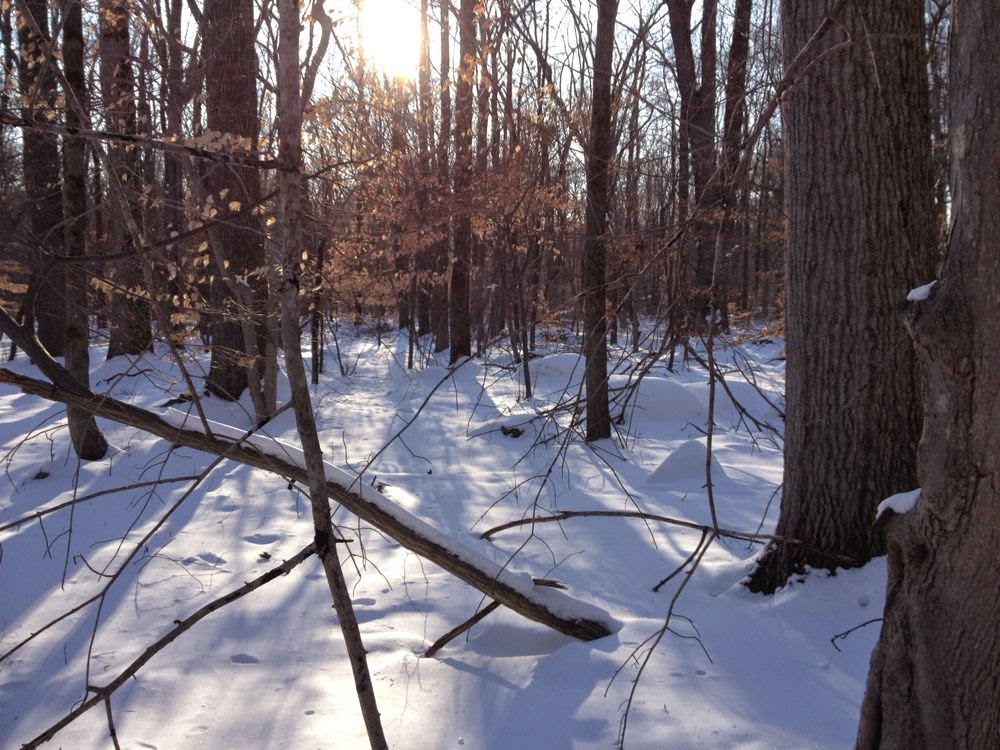 This flat, densely wooded terrain, part of the Levine Tract preserved after the Veblens were gone, may not look promising for an interesting find. 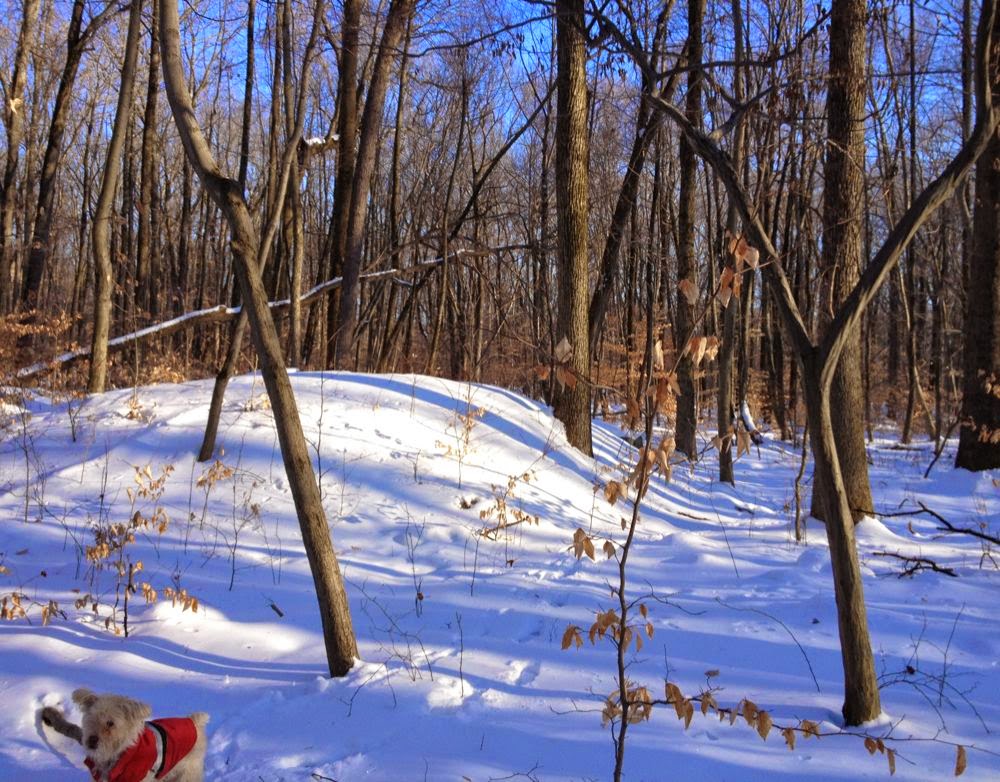 But what's that mound rising up in the middle of an otherwise flat expanse north of the ridge? 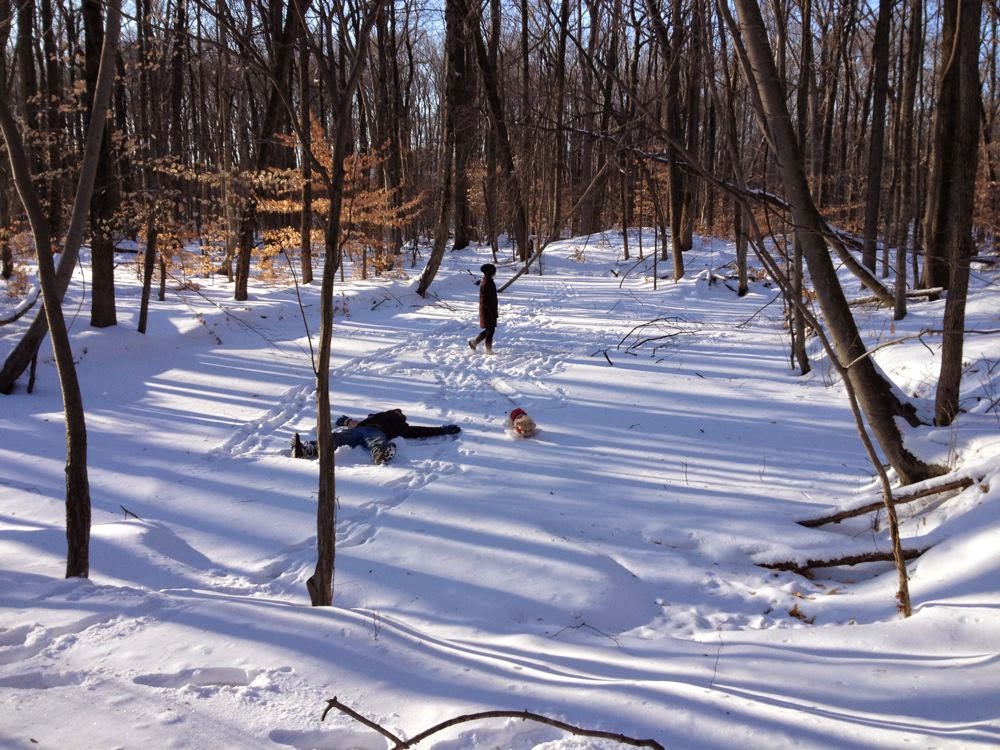 Why, it's an ice rink, carved out of the rocky ground by a bulldozer long ago. Whether that was the intent is unclear. Might a homesick, bulldozer-driving Canadian have gone rogue a half century ago? If so, he correctly predicted that the water table would stay high enough in that area to insure seepage into the three foot deep, L-shaped cavity, and plenty of water to freeze in the winter. Nice math: Man + time + machine + hydrology + wintry weather = ice rink. It's all beginning to add up. 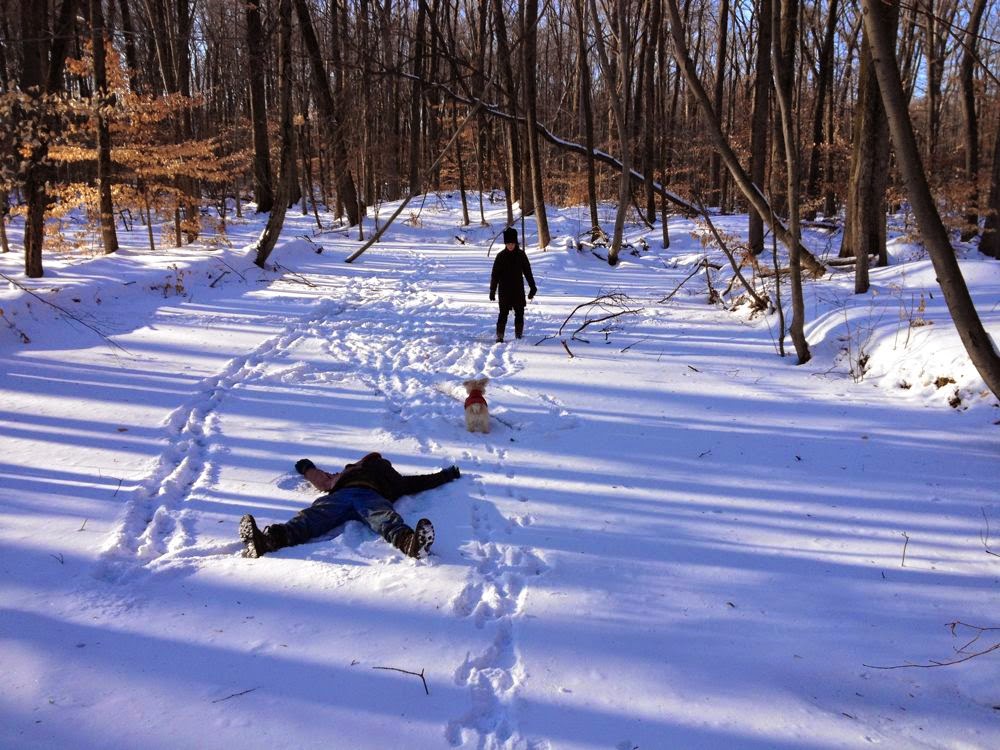 As you can see, the ice is thick enough to hold my daughter, a dog named Leo, and what appears to be an angel. After weeks of cold weather, the pond, which has no outlet, is probably frozen solid.

Next time, we'll bring a shovel and clear us a nice spot for that hockey game the mythic Canadian longed for. 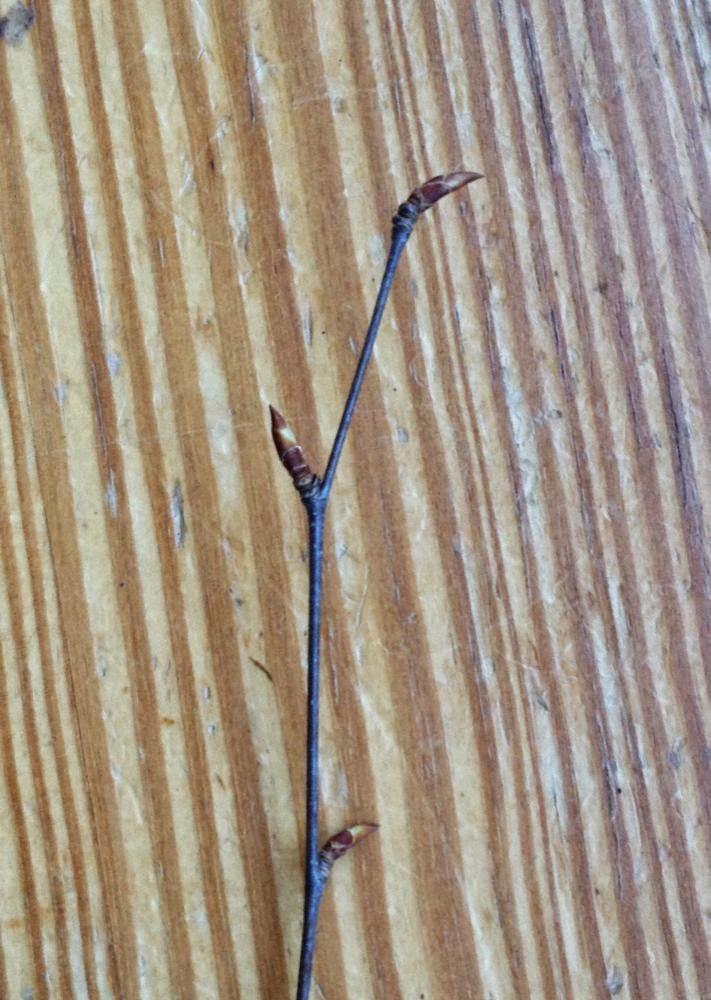 Leaning over the water, all along the perimeter, are black birch trees whose buds begin to taste like wintergreen after a few seconds of chewing. 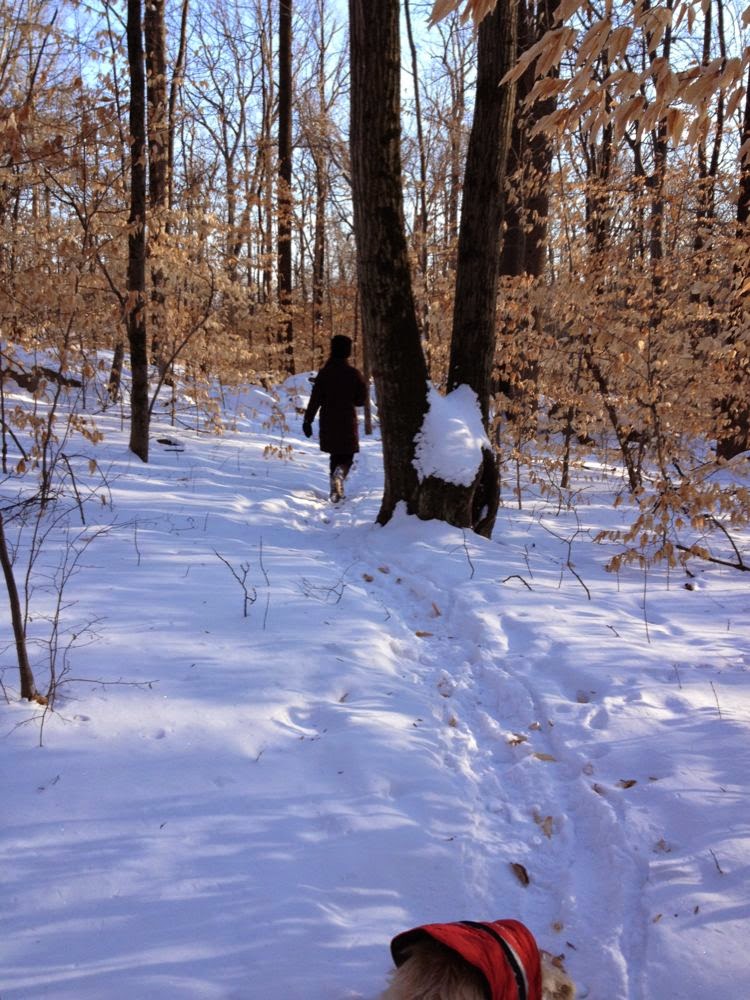 The beech tree leaves decorated our walk back, but there was still more sculpting to see. 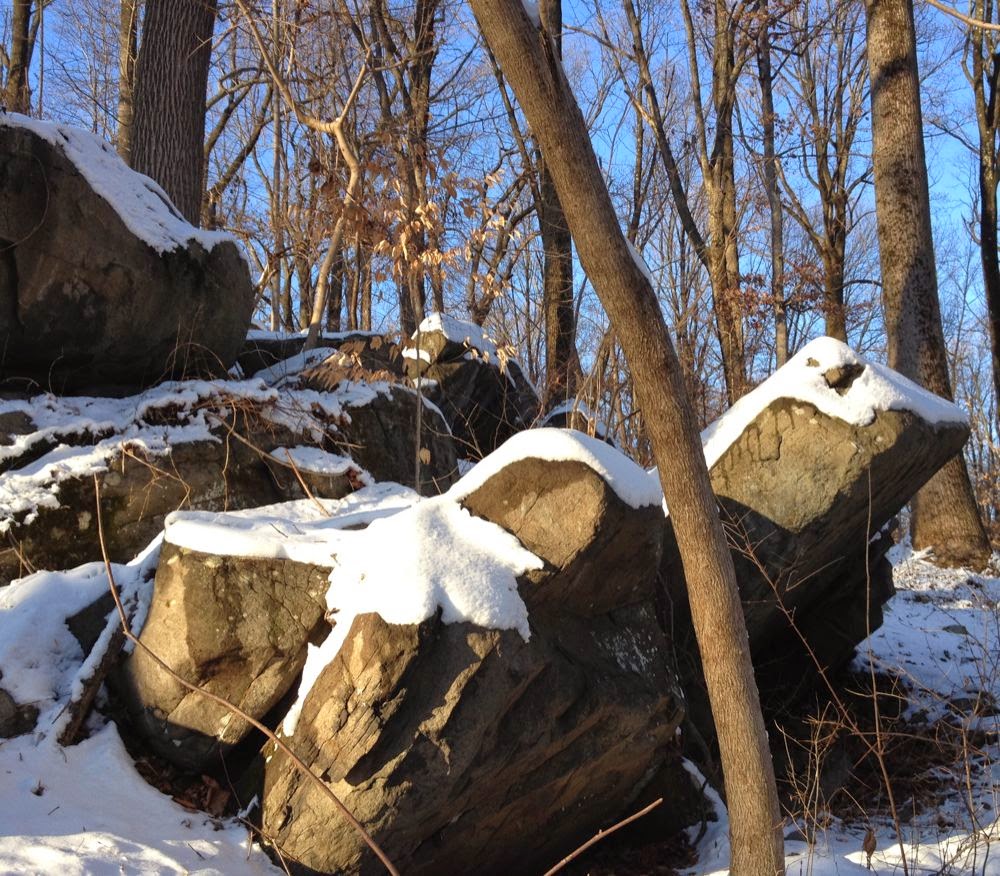 Kurt showed me where he and Sally have been doing some habitat restoration around the sculpted features jutting out along the dramatic dropoff overlooking the Veblen cottage. Though the glaciers--essentially giant natural bulldozers--didn't quite reach our area during the last ice age, the powerful winds that blew down from them must have contributed to exposing these boulders. 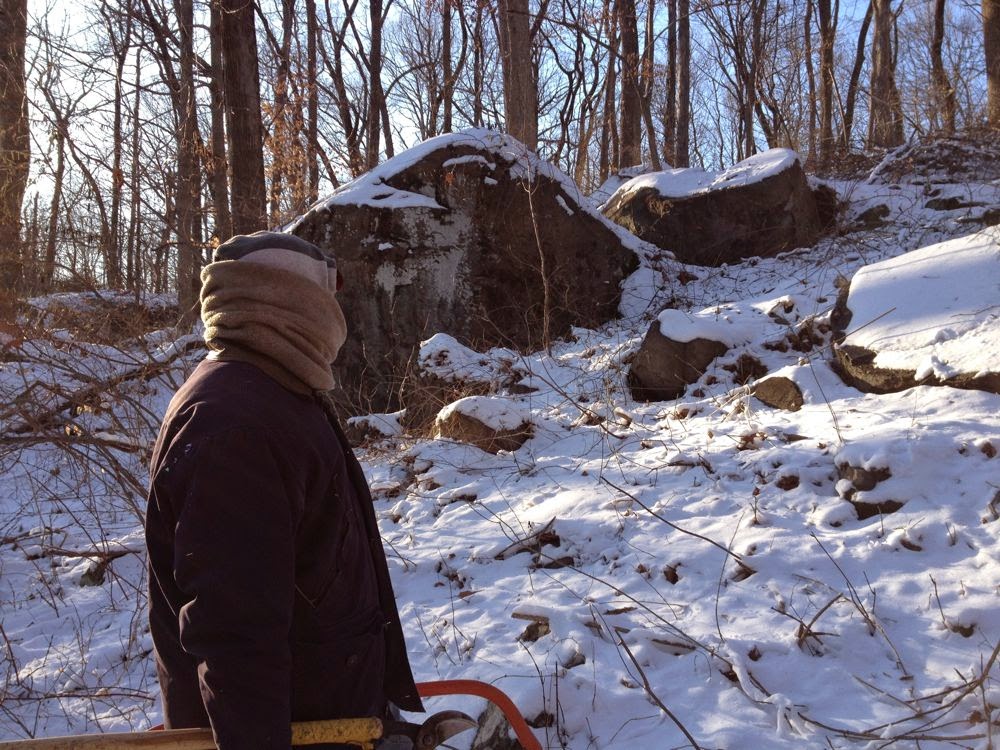 And now Kurt, another force of nature, has been re-exposing the boulders by removing invasive shrubs from the steep slope. If they're too big to pull out, the Privet, Linden Viburnum, Honeysuckle, Multi-flora rose, and winged Euonymus are being cut down, improving prospects for the spicebush, blackhaw Viburnum, and other natives. This spring will mark the first time this dramatic geologic feature will be visible in decades.

Walking down the hill to the cottage and farmstead--a beautiful sight in a snowy landscape--we craned our necks to see the tops of the towering tulip poplars, where late sun was highlighting last year's array of tulip-shaped blooms still held tight in vaulted canopy. 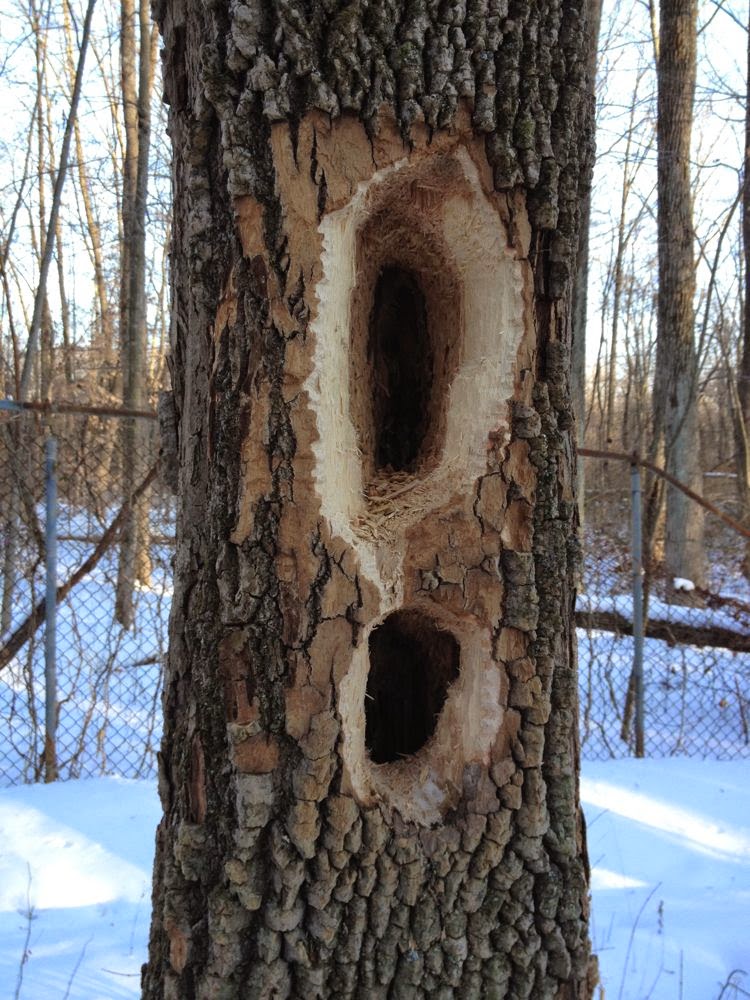 On the way back to the parking lot, we saw some work by Herrontown Woods' sculptor in residence, the pileated woodpecker. Signature features are the size and vertical shape. 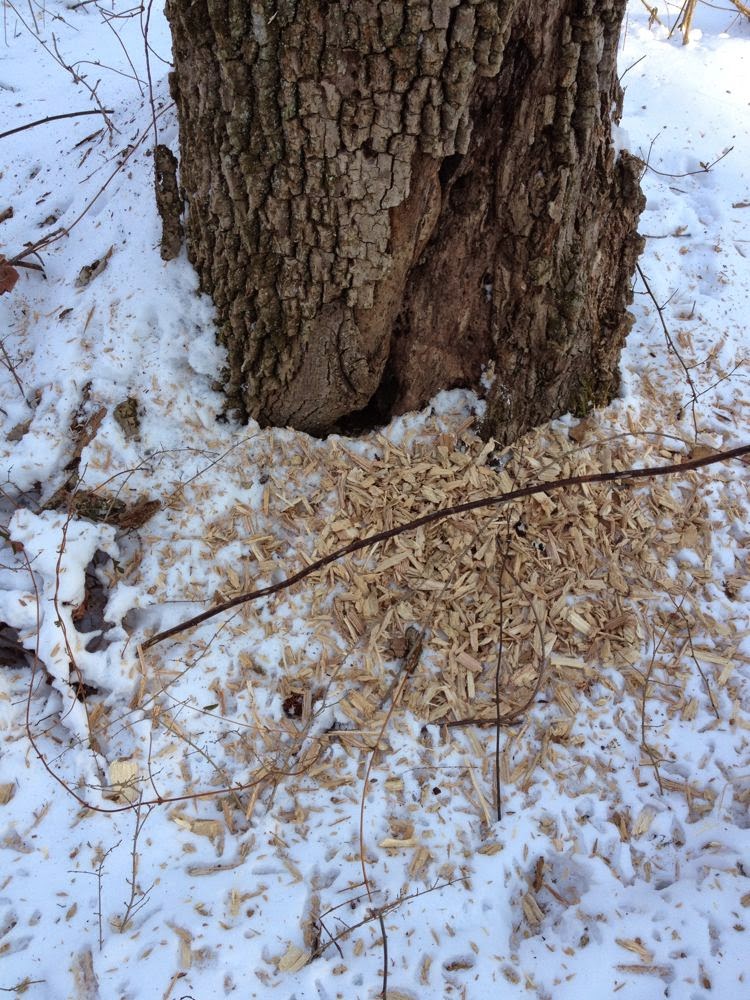 And the fresh woodchips on the snow suggested the work had been done earlier in the day. 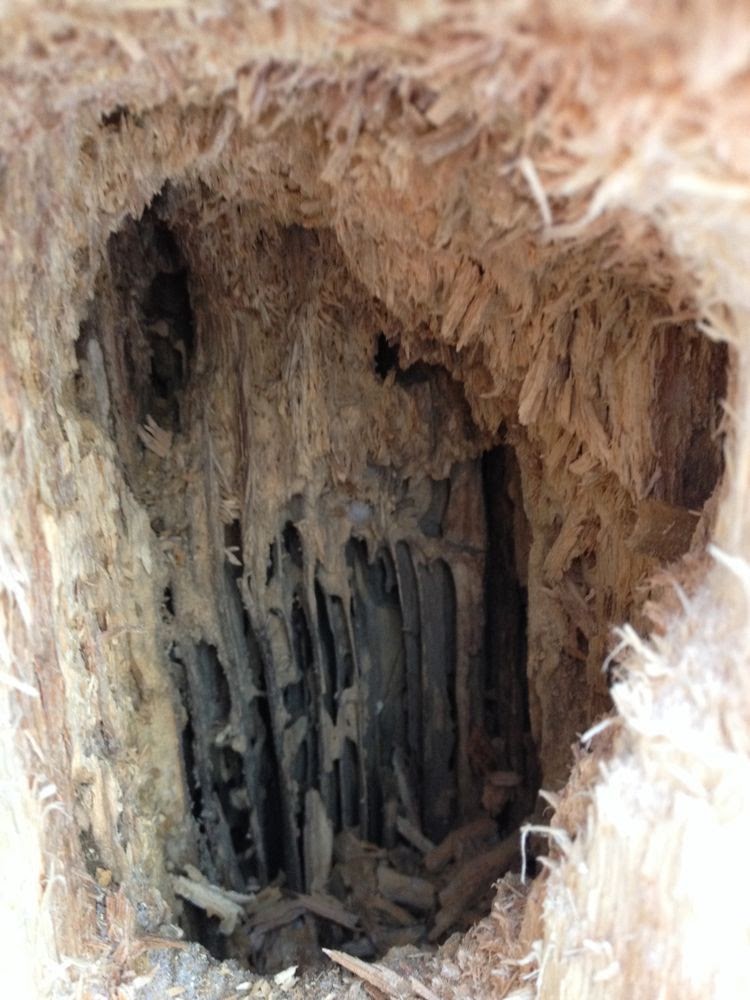 Deep in the tree was the prize. Looks like carpenter ants to me.

Back home, we warmed our feet and hands next to the woodstove, as the Veblens certainly would have after an exhilarating winter's walk.
Posted by Stephen Hiltner No comments: