Feature Article on Veblen in the Princeton Alumni Magazine 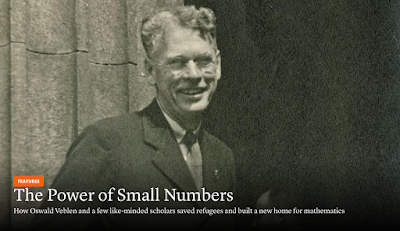 Thanks to the research and writing talents of Elyse Graham, the Princeton Alumni Weekly devoted its May 16 cover and a feature article to Oswald Veblen and his tireless work in the 1930s and 1940s to find positions in the U.S. for European scholars whose careers and lives were imperiled by the Nazi rise.

A post about how the article, and a previous article entitled "Adventures in Fine Hall", contribute to an increasing recognition of Veblen's legacy can be found on the Friends of Herrontown Woods website.

Here are some quotes from the article that provide some insight into Veblen's character:


"Tall and lanky, he had the furtive vanity typical of a mathematician, dressing in handsome but deliberately shabby suits. One of his colleagues, Hermann Goldstine, recalled, 'We always had a theory with Veblen that after he bought a new jacket and pants he would hire somebody to wear them for a few years so that they wouldn’t look new when he put them on.'"

His eye for talent and lack of professional jealousy:


"Veblen was able to build exciting communities in part because he had an eye for talent and an utter lack of professional jealousy. Goldstine later recalled, 'I think the nicest part about Veblen is that however great a mathematician he was, and he certainly was a great mathematician, he recognized greatness in mathematicians and in scientists, and as far as I know he had no envy for people who were greater than he. And that’s not trivial.'"


"according to Institute fellow Leon Cohen, '.... My impression was that young mathematicians of some talent were regarded as resources to be saved.' Cohen added, 'I hesitate to attribute views to Veblen, but the considerations that seem to have actuated him were two: a concern for the welfare of mathematics itself, and a humane concern for certain individuals who had talent.'"

The article makes frequent mention of lists Veblen compiled of displaced European scholars and how they might contribute to an American educational institution willing to take them in. An echo of Schindler's List can be heard in these gathered names of people who, for lack of a work position in America, might otherwise lose their lives in a Nazi concentration camp.


"Similar lists went out steadily from Veblen’s office to institutions all over the United States, urgent in their volume but, in their expression, as mild and as persistent as snow: 'If it were thought advisable ... ,' 'It is my impression ... ,' 'The clerical work would be very little, using the available facilities.'"

"'I think all of Veblen’s life he was a natural administrator and leader,' Goldstine said. 'He was the kind of guy who would keep dripping water on the stone until finally it eroded. If it didn’t happen otherwise, he just kept at it, and at it, and at it.'" 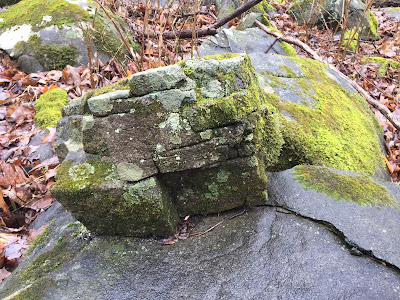 Maybe that was one reason why Veblen was drawn to the land that later became Herrontown Woods: the many diabase boulders there are highly resistant to erosion, and yet they too ultimately yield to the power of water to slowly create fissures.