The Emanns and Einstein at the Cottage

There are many stories about the Veblen House and Cottage that have yet to be written up on this blog. Blame it on the sheer pleasure of pursuing history on the internet. We could call it "history bathing"--a form of immersion not unlike forest bathing. It also reminds me of fishing, in that one casts different "baits", e.g. Oswald Veblen or JP Whiton Stuart, into the richly stocked waters of the web, then starts landing lunker after lunker. The sheer joy of making connections and finding meaning in lives made more profound by time is enough to satisfy. To forge the catch into narrative for others to read has pleasure, too, but any attempt to overcome entropy involves effort.
Still, I feel remiss to discover that it has been almost nine years since an email came out of the blue from a woman named Rebecca Martin. She was researching her ancestors, one of whom she had discovered had rented the cottage from 1933 to 1937.
"My grandmother," she explained,  "lived in the farm house along with her parents and siblings during the 1930s. There's a story about Albert Einstein walking through the woods around the house and speaking to my great grandmother, who would feed him a sandwich and talk with him. She spoke German, so I'm guessing that if this story is true, he probably appreciated communicating with someone in his native language."
She later told me that her grandparents' names were Harry C. Emann and Claire M. Emann. The farmhouse she refers to is what we now call the Veblen Cottage. Oswald and Elizabeth Veblen bought the farmhouse and farm in 1936, apparently from the bank. According to Rebecca's timeline, the Emanns moved out the following year.
Reading Rebecca's email more closely, I realize that it was the great grandmother, not the grandmother Claire, who spoke in German with Einstein. The assumption has always been that the Veblens bought the cottage and farm, and would then have their friend Einstein come out to visit. But if Einstein's friendship with the great grandmother preceded the Veblens' purchase of the property, might it have been Einstein who told the Veblens about the place, which back then was out in the country, far off on the other side of town from where the Veblens lived on Battle Road? And might the great grandmother also have known Max Latterman, who by then was likely working for the Whiton-Stuarts next door, tending to their many horses? Max, too, was a German immigrant, who would continue caring for the property, and the farmhouse as well, after the Veblens bought the Whiton-Stuart's house and land in 1941.
What we have, then, is the apparent connection between three German immigrants--Einstein, Claire Emann's mother, and Max Latterman--that may have influenced the beginnings of what is now Herrontown Woods.
Toss the grandmother Clair's name into the waters of the internet and "Find a Grave" tells you her full name was Claire Magdelina McClure Emann, and that she was born October 23, 1906 and is buried in Fountain Lawn Memorial Park in Ewing. A 1998 article in Town Topics tells a bit about her life and family:

Claire Emann, 82, of Longwood, Fla., formerly of Princeton, died December 19 in a nursing home in Longwood Born in Trenton, she lived in Princeton most of her life before moving to Longwood 10 years ago. She was employed by Educational Testing Service, retiring as a supervisor after 20 years of service. Wife of the late Harry Emann, she is survived by three sons. William of Kingston, Walter of Princeton and John Emann of Flemington; two daughters. Ruth Rowley of Longwood, Fla , and Marion Martin of Orlando. Fla.; 19 grandchildren and 17 greatgrandchildren.

The Historical Society of Princeton's staff did some helpful research, finding the Emanns living (apparently renting) on Herrontown Road in 1936. We had hoped a historical address would be found, but the address was "RD" for Rural Delivery.
Rebecca wrote to me in 2014 about how she feels about the farmhouse her ancestors called home: "It would indeed be a shame to lose it. I was able to visit that house in the spring ten years ago. It was boarded up and falling apart even then. It's too bad more people aren't interested in preserving it."
Well, nine years of persistence later, we do have more people interested in preserving it. FOHW's architects have carefully measured the cottage and with a structural engineer are developing designs for stabilizing it. We've been keeping the structure dry with tarps. Architectural drawings are helping us consider options for repurposing the farmhouse, whose farm so many years later is now a forest.
Posted by Steve Hiltner No comments:

Occasionally, artifacts from the early days of Herrontown Woods come to light. 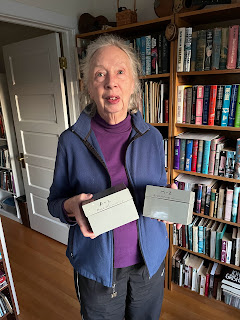 Betty Horn, who has long taught a spring wildflowers course for the Adult School, and maintains the University's Rogers Bird Room, contacted me last month:

"Hi Steve,
I was at the University yesterday and came across two small metal boxes filled with index cards. They had “Herrontown woods” printed on the side and contained index cards listing plants alphabetically by Latin names.
I don’t know when they were made or who made them. If you would like them, please let me know."

She continued: "They were stored in an Eno Hall basement room known as "The Bird Room." They came to light when the Bird Collection was moved from Eno to Green Hall. They were probably in a niche along with other historical items (such as bird journals from W.E.D. Scott) and were put there when the collection was moved from Guyot to Eno. I think that was in the '70's." - Betty 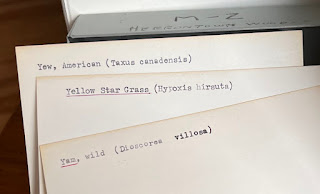 The boxes are filled with cards, each with a plant name and nothing more. What finally occurred to us was that each plant had two cards--one with its common name, the other with the latin name, just like in the plant inventory that appears in the book about Herrontown Woods published in the early 1970s. The author, Richard Kramer, had done a study of Herrontown Woods for his doctoral dissertation at Rutgers.

Here's the last page of the inventory in the book.

The index cards must have been the official inventory that was then transferred to the book. How they ended up at Princeton University's Eno Hall is not clear.

Thanks to Betty for giving us this artifact from Herrontown Woods' early days. 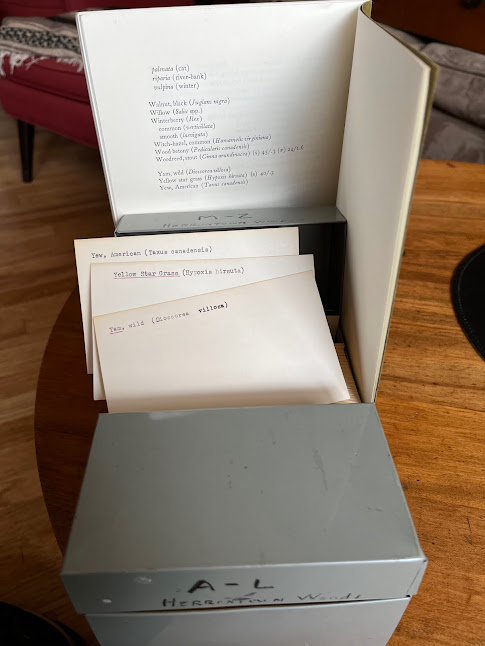