Installations and Spring Cleanings on the Veblen House Grounds 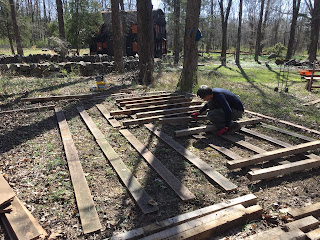 The Veblen House project is very much about utilizing "found" materials. Herrontown Woods and the house itself can be considered "found," in that they have undergone a process of discovery and recovery by volunteers after years of institutional neglect. The latest "finding" by the Friends of Herrontown Woods consists of some old plastic decking that we managed to spare a trip to the landfill. Volunteer Robert Chong asked if we could use the 20 year old planks he was replacing at his home in West Windsor.

The offer fit perfectly with our plans for a stage for performances on the Veblen House grounds. Some of the boards had warped somewhat over the years, and we were going to let Robert throw those out until we realized we could lay them on the ground, as a base for the 4x4's to be laid over top. 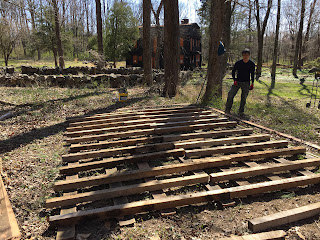 Though the black locust 4x4's are rot resistant, having them not directly touching the ground should help them to last even longer. 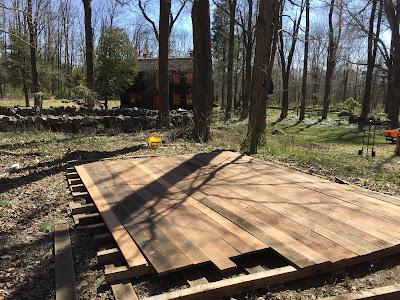 The final layer of this reuse sandwich was the most serviceable plastic decking planks, creating a nice flat, durable surface for performers. Thanks to Robert for not only donating the materials but helping put the stage together. 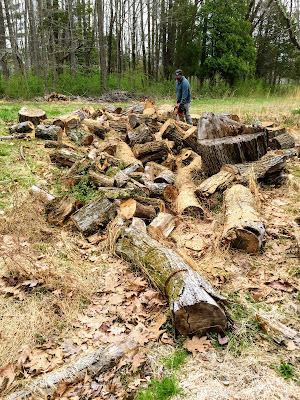 Elsewhere on the grounds, our friend Victorino, whom I think of as a chain saw virtuoso and an angel, for all the help he gives us, cut up red maple logs that had been lying in front of the Veblen House since the trees were felled last year. Several volunteers--Owen, Andy, Becca and Andrew--helped move the wood away from the house for future splitting. 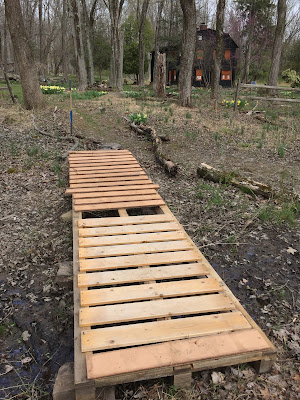 There's also a new trail up to Veblen House from the parking lot, with a bridge over some muddy ground. It too is built using found materials--the very long pallet upon which Robert's new decking had arrive, and some scavenged planks. The new trail follows a stream, and passes by what once was a fenced in garden where Elizabeth Veblen propagated her daffodils. 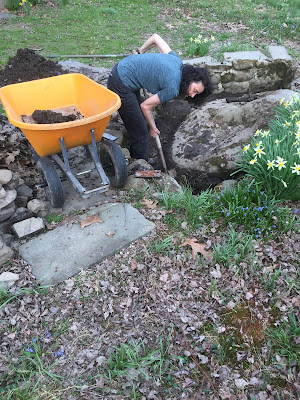 The fish pond next to Veblen House got a spring cleaning, thanks to Inge Regan, who dug a foot of muck out of the bottom. 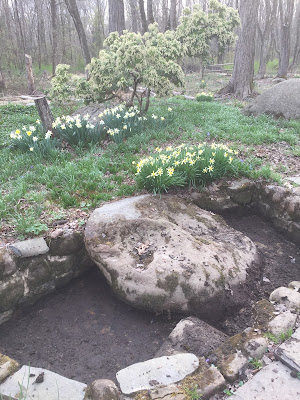 She was happy to find the pond has a flat bottom, not seen in two decades.

Elsewhere on the grounds, "food forests" of pawpaw, hazelnut, plum and butternut were getting vines pulled and protective cages repaired.

What makes all of this worth the effort? It's the beauty and tranquility of the setting that certainly must have cast a spell on the Veblens when they bought the house in 1941, and now casts a spell upon us.