One role the Veblen House could play in a town so filled with vaunted institutions of higher learning is to make scientists better known as people. They tend to be presented in the media as remote figures stripped of personality, speaking about weighty subjects from their domain of rationality. As civilization has increasingly veered towards self-destruction, first with the nuclear arms race and now with a headlong radicalizing of the climate, scientists are primarily seen in the role of sounding the alarm. Caring people in a careless world, they are cast in the predictable, sober role of expressing concern while the rest of humanity goes its merry, scary way. Having grown up among scientists, I was able to see them as people who brought incredible perseverance, creativity, joy and humor to their study of the nature of things. 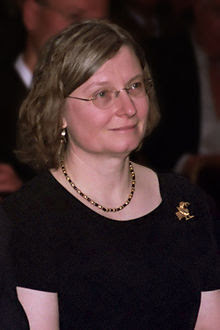 One piece of recent writing that captures that side of science was Siobhan Roberts' portrait of Belgian mathematician Ingrid Daubechies, who in 2004 became Princeton University's first female full professor of mathematics. In her career, first in Belgium, then in the U.S., she has developed mathematical tools that have helped make possible the visual feast of the digital age, and she has even shown how artificial intelligence could be used to conserve and restore iconic artworks.

Entitled "The Godmother of the Digital Image," the article gives a portrait of Daubechies as optimistic, generous, creative, and fun-loving.

The optimism perhaps comes from being able to solve problems others cannot:

"She revels in finding meaningful and practical problems — and solutions — where other mathematicians assume there are none."

And there's generosity in the way she uses this capacity to help her students:

“I called her the deus ex machina adviser,” says Cynthia Rudin, a Duke computer scientist who is one of her former Ph.D. students. “When you’re in the depths of despair, your project has crashed and burned and you have almost proven that what you’re trying to do is impossible, Ingrid comes along and pulls you out of the pit of doom, and you can keep going.”

A mathematician can more easily think, and act, outside the box. How many people do you know who would throw a big shindig on their 64th birthday rather than their 65th, because 64 is a more compelling number, being a power of 2?

"Daubechies booked a venue, a caterer, a troupe of majorette dancers known for farce — and then at the party made a surprise appearance in the baton-twirling cancan line, disguised in makeup and a tutu."

Along with her periodic "cathartic weeding in her garden," one of Daubechies' mottos, “Math can help! As always!”, reminds me of a letter about Oswald Veblen from 1992 in Princeton's Town Topics newspaper:

He and his friends spent Sunday afternoons clearing the poison ivy from the bank of the canal. He advocated washing vigorously with yellow soap after this. "You bet! "as he was prone to say. - ELIZABETH G MENZIES 926 Kingston Road

The letter writer, Elizabeth G. Menzies, turns out to have been the first female official photographer for Princeton University, who made a name for herself with a photo of Albert Einstein that appeared in a 1939 issue of Scientific American.

Roberts' article also delves into Daubechies' efforts to help other women overcome institutional bias and gain deserved prominence in the field of mathematics. Veblen took on this role in the 1930s, helping the great mathematician Emmy Noether get positions at Bryn Mawr College and the Institute for Advanced Study.

While it's easy to see mathematics as intimidatingly complex, it is not uncommon among mathematicians of Daubechies' caliber to find in their work an underlying elegance and beauty. Describing how she found a practical application for wavelets without sacrificing the beauty of the original concept, she said,

“It is something that mathematicians often take for granted, that a mathematical framework can be really elegant and beautiful, but that in order to use it in a true application, you have to mutilate it: Well, they shrug, That’s life — applied mathematics is always a bit dirty. I didn’t agree with this point of view.”

Thanks to a gifted writer like Siobhan Roberts, people can begin to see how much humanity and passion a scientist can bring to her work.

Other posts about great women in math and science:

Vera Rubin: The Courage of Her Curiosity