Vera Rubin--The Courage of Her Curiosity 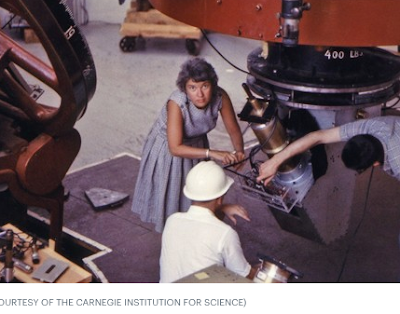 A friend sent an article from the Atlantic Magazine announcing that a telescope is being renamed in honor of the great astronomer Vera Rubin. That article in turn has led to autobiographies by Ruben and another great astronomer, Margaret Burbidge, both of whose careers intersected with my father's.

Largely government funded, the Vera C. Rubin Observatory is the first national U.S. telescope to be named after a woman. Though the story has no direct connection to Oswald Veblen, it is congruent with his heritage and legacy. In the late 1800s, when women had far fewer options for pursuing higher education, Veblen's parents and grandparents sent all their children to college, daughters and sons alike. One generation attended Carlton College, the next the University of Iowa, which has the distinction of being the first public co-educational university in the U.S..

Oswald would take that familial heritage into his career in Princeton, where he used his position of influence to help the great mathematician Emmy Noether, displaced after the Nazi takeover in Germany find employment in the U.S.. Veblen took the lead in helping find her a position at Bryn Mawr and inviting her to be a Visitor at the IAS. By that time, 1933, Veblen had left Princeton University to become the first faculty member at the Institute for Advanced Study, which was non-discriminatory from its inception. Princeton University, on the other hand, was men-only until 1975. When Vera Rubin expressed an interest in attending Princeton for graduate studies in 1948, the university would not even send her an application. Princeton ultimately came around, giving her an honorary degree in 2005.

Vera Rubin, who was a lifelong advocate for women in science, was herself inspired by a woman astronomer born 110 years earlier than herself, Maria Mitchell. Demonstrating the power of history and legacy, Rubin reportedly chose to attend Vassar College because Mitchell had been a professor of astronomy there 80 years prior. 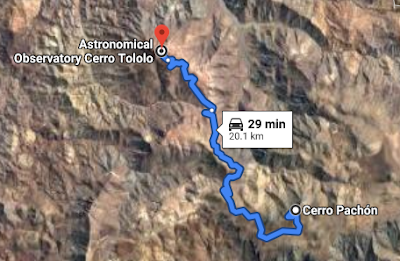 The story of Vera Rubin has its most direct connection here to my own family's history. The first connection I discovered is geographical. Cerro Pachon, the mountain in northern Chile where the Vera C. Rubin Observatory is nearing completion, is only a half hour from Cerro Tololo, where I spent some free-range halcyon days as a boy, exploring the desert and tossing rocks off the edge of the mountain while my father, W. A. Hiltner, was on extended observing runs. 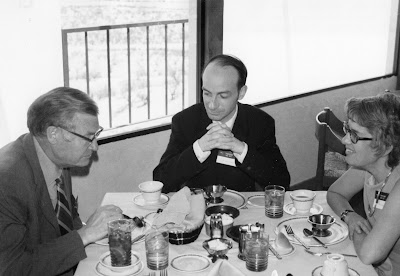 Another connection is also through my father's career, which intersected to some extent with Vera Rubin's, as in this 1971 photo with my father on the left and Vera Rubin's on the right (courtesy of the AIP Emilio Segrè Visual Archives, Dorothy Crawford Collection), and to a much greater extent with the work of astronomer Margaret Burbidge. A NY Times obituary from 2016 states that "Dr. Rubin, along with Margaret Burbidge ..., was a “guiding light” for a generation of female astronomers."

If it's possible to encapsulate major contributions, "Rubin’s work in the 1970s provided convincing evidence that dark matter existed," while Margaret Burbidge and her husband and fellow astronomer Geoff Burbidge, "were best known for their work in the mid-1950s describing how stars synthesize nearly all the chemical elements in the universe, from carbon and iron to lead and uranium."

The Burbidges, originally from England, along with two other great scientists, Fred Hoyle and William Fowler, stirred things up in the astronomy world with their progressive thinking. Their names were very familiar in our household, growing up.

In reading the interviews and autobiographies of Vera Rubin and Margaret Burbidge, I was gratified to discover the role my father played in Margaret's career early on. This was at a time when many institutions of higher education considered astronomy a men-only profession. Margaret's application in 1945 for a Carnegie Fellowship in Pasadena was rejected due to her being a woman, and in 1948 Vera Rubin, as mentioned, was not even allowed to apply for graduate studies at Princeton University. The largest telescope, at Mt. Palomar, would be unavailable for women until Rubin broke through that barrier in the mid-60s, famously taping the figure of a skirt on the bathroom door to create a women's bathroom.

There were no such restrictions at the University of Chicago's department of astronomy, and its two renowned observatories in Wisconsin and Texas. My father was on the faculty at U. of Chicago, based at Yerkes Observatory in Wisconsin. In 1951, he was able to arrange funding for Margaret to take a position there, and later came up with a way for her to get coveted observing time on the 82" telescope at McDonald's Observatory in Texas. From her autobiographical essay:


Before the cold Yerkes winter set in, Geoff and I prepared a program to submit for McDonald observing time ... But the time for submission was past; since we wanted winter time when the December Milky Way was up, we were too late. Here the never-to-be-forgotten kindness of Al Hiltner came to our rescue. He had set me to work on prevention of internal reflections and scattered light in a spectrometer for calibrating coude plates at McDonald, and he had a month (I believe) scheduled for photometry at McDonald. He said there would be many nonphotometric nights during this period, and if Geoff and I could get ourselves to McDonald ... we could have the non-photometric nights for spectroscopy ...

Gratifying, too, was reading Burbidge's and Rubin's descriptions of their burgeoning curiosity as children. It brought back memories of growing up among astronomers who loved their work, in a family where curiosity and creativity were valued. Science for me has always been about beauty and exploring the magnificence of creation.

Vera Rubin describes her curiosity about the world and her active imagination:


As a youngster, more questions followed. Why did the pictures on my bedroom wall jump back and forth on each side of my finger as I lay in bed blinking my eyes? How did water drops in a stream know on which side of a rock to pass? Could I, a lazy child, devise a street on which one sidewalk went uphill and one side downhill, so that I could always walk downhill? A little later, the questions were more conventional. How many license plates can be made with three numbers and two letters? This puzzle I solved as we drove to our new home in Washington, D.C.

Margaret Burbidge describes it this way:

At age 4, before beginning school, my first view of the beauty of stars in the summer sky during a night-time boat crossing from England to France was the earliest step toward a lifetime love of astronomy. Then I developed an early interest in arithmetic and in numbers (especially large ones with many powers of ten to write out and contemplate); this began in my first years in school. I had learnt to read before going to school, so books were a continuing delight. My parents gave me books written for children on all the natural sciences, and reading these was coupled with both my mother's and father's willingness to show me and tell me about the wonders of the seashore, of flowers, plants, and trees (both my sister and I became passionate tree climbers throughout Hampstead Heath, near which we lived). My love of flowers is lifelong, and has been inherited by my own daughter.

And later in her youth:

When I was 12 or 13 years old, my grandfather gave me Sir James Jeans' popular books on astronomy. Suddenly, I saw my fascination with the stars, born at age 4, linked to my other delight, large numbers. That the nearest star is 26,000,000,000,000 miles away revived those excitements of my first school years (although falling short of my then favorite contemplation, 1 followed by 36 zeros). I decided then and there that the occupation I most wanted to engage in "when I was grown up" was to determine the distances of the stars. My mother recalled telling me, as I lay on my stomach on the floor reading the wonders described by Jeans, that it was bedtime, and that I pleaded for a little more time: "Mum, it's so exciting!"

Combined with the intellectual and emotional delight--and resonating with Veblen's hiking and woodchopping ways--was the pleasure Margaret found in the physicality of exploration, whether climbing trees as a kid or spending nights in the dome of an observatory with the heavens above. My father came to astronomy after growing up on a farm, and brought that appetite for physical work and resilience against the elements with him, donning insulated underwear for long nights in the Wisconsin winter, where the best nights for observing were also the coldest.

Margaret put it this way:


I often think about the joys of work in an open dome, under the stars, next to the telescope, joys denied to most younger astronomers and students who must sit in a warm console room, facing a television guiding screen and many complex computer interfaces, well removed from the telescope itself.

Smuggling that avid curiosity and sense of wonder into adulthood not only enriched their lives. It likely helped Vera Rubin and Margaret Burbidge break through (or find ways around) the barriers they encountered as women in a profession dominated by men. One sentence in Vera Rubin's autobiography stood out. In 1960, Rubin had just arrived in the Netherlands for an International Summer Course in Science. There she heard lectures from some of the world's greatest astronomers--Jan Oort and the Burbidges among them. "Initially," she wrote, "Oort terrified me, but I soon had too many questions to stay silent."

Thus the title of this post: The Courage of Her Curiosity. In the 21st century, when so many people hold convictions, sure they are right when surely they are wrong, we would do well to turn to curiosity as a better source of courage. 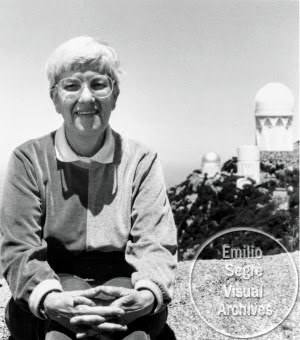 (Vera Rubin posing with Kitt Peak Observatory in the background--an institution my father played an important role in developing, and where a telescope bears his name. It was at Kitt Peak in 1968 that Vera Rubin and Kent Ford made discoveries that would transform our understanding of the universe. Thanks to AIP Emilio Segrè Visual Archives for these photos.)
Posted by Steve Hiltner