The Humanity Behind Science--Emilio Segrè's Biography of Enrico Fermi

One role the Veblen House could play in a town so filled with vaunted institutions of higher learning is to make scientists better known as people. They tend to be presented in the media as remote figures stripped of personality, speaking about weighty subjects from their domain of rationality. It was a mix of curiosity and serendipity that led me to one of the finest examples of writing that reveals the humanity behind the austere academic facade of scientific inquiry. 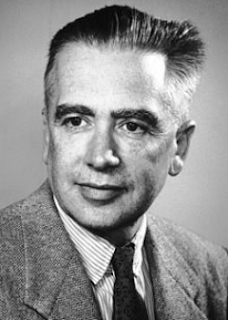 The writings were found in Enrico Fermi: Scientist, written by Emilio Segrè, who along with having won the Nobel Prize for physics was also a gifted writer and avid historian. His photos of people and events over the course of his scientific career, donated posthumously to the American Institute of Physics, were apparently so substantial that the AIP named its visual archives in his honor. The AIP calls its Emilio Segrè Visual Archives "the human face of science," with "more than 30,000 photos of scientists and their work."

While the Institute for Advanced Study was rapidly evolving in Princeton in the 1930s, Segrè during that time was one of the "Via Panisperna boys" in Rome--young Italian physicists led by Enrico Fermi during an exciting period of discovery in atomic physics.

Two recent events, related to Oswald Veblen and also my own history, led me to be interested in Enrico Fermi. One was the donation of a book from Oswald Veblen's original library by Jean Rosenbluth, daughter of Marshall and Arianna Rosenbluth, both of whom were distinguished physicists. Marshall Rosenbluth, known in his time as the "dean of plasma physics," would be particularly well known in Princeton, home of the Princeton Plasma Physics Laboratory. Enrico Fermi was on Rosenbluth's dissertation committee at U. of Chicago, and there's a memorable story told in the NY Times obituary for Rosenbluth that involves Fermi:

(Marshall Rosenbluth) liked to tell friends how Enrico Fermi and Edward Teller -- two stars of 20th-century physics -- got into an argument in 1949 while listening to him defend his doctoral thesis.

''It went on and on,'' recalled Harold Agnew, then a graduate student at Chicago, who eventually directed the weapons laboratory at Los Alamos, N.M. ''Finally, Fermi turned to Edward and said, 'O.K., you pass.' And then he turned to Marshall, who was just 22, and said 'O.K., you pass, too.'''

The other recent reference to Fermi came when I began researching the original owner of a house that became our family home soon after we moved to Ann Arbor, MI, in 1970. My parents bought it from the estate of Walter Colby. It took fifty years, and the opportunity to meet the goddaughter of Colby, to finally prompt me to do some research. Colby, it turns out, was an atomic physicist and contemporary of Oswald Veblen.

During more than 30 years at the university, Dr. Colby made the institution a major center of physics research by recruiting to the faculty from abroad such figures as Enrico Fermi, Werner Heisenberg and Sam Goudsmit.

This sounded very impressive, and suggested that Colby, like Veblen, was involved in finding positions for displaced scholars from Europe in the 1930s. And yet, the NY Times obituary and the wikipedia page for Fermi make no mention of the University of Michigan. Instead, Fermi is described as having gone first to Columbia University, then to the University of Chicago. Was Colby's role in bringing Fermi to the U.S. apocryphal?

It was Segrè's book on Fermi that revealed the answer. In the years leading up to his move from Europe to New York and Columbia University in 1939, Fermi had spent three summers in Ann Arbor, drawn in part by "two old friends, Uhlenbeck and Goudsmit, the discoverers of the electron spin, who had moved from their native Holland to Ann Arbor at the instigation of Professor Walter Colby." From Segrè's book:

As Segrè describes, it was the positive experiences Fermi had in Ann Arbor that helped set the stage for his eventual emigration to America. That decision, and a similar decision by other great European physicists and mathematicians, helped insure that the United States would be the one to develop the atomic bomb, rather than the Nazis or Mussolini.

These passages begin to show how Emilio Segrè a prominent physicist in his own right, was also gifted with a talent for close observation and an ability to give us a dispassionate but engaging, three-dimensional account of other scientists' inner and outer world. Below are some passages from the book that provide insight into how Fermi thought, worked, and influenced those around him. Click on "read more" below to continue reading.

How one physicist's manner and broad intellect influenced others:

On how Fermi's "enlightened simplicity" allowed others to gain entry into an otherwise forbiddingly complex subject:

On the steady pace of Fermi's thinking, regardless of the complexity of the subject:

On Fermi's minimal use of books, and the intellectual excitement young physicists experienced at "Fermi's school" in Rome.

How Fermi's manner towards his students was "free of complications:"

The following description of the bonding among young scientists in Rome reminds me of the bonding of mathematicians under Veblen's leadership at the Aberdeen Proving Grounds during WWI:

Some European scientists in the early 1930s, concerned about the rise of totalitarianism in Germany, moved to Rome before moving to the United States:

Fermi's capacity to "analyze into its essentials every problem, however complicated it seemed to be."

How Fermi achieved "important results with a minimum of effort and mathematical apparatus." It's one thing to know something in science, and another to be able to convey it clearly by distilling it down to its essentials.

A description of Placzek, whose interests went far beyond physics, and what it meant for young physicists to be exposed to a wide-ranging intellect.

On Fermi's lack of vanity, which is also said of his student Marshall Rosenbluth: