Between them, the couple who built and first lived in what later became the Veblen House carried seven names: Jesse Paulmier Whiton-Stuart and Mary Marshall Ogden. It has taken awhile to realize just how much lineage and pride each of those names might carry. 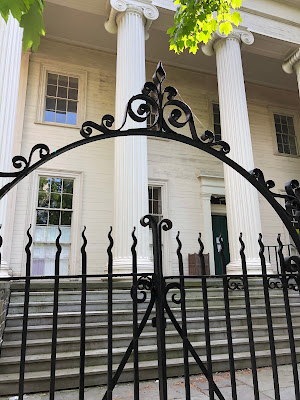 Research on Jesse's middle name, Paulmier, began with an email received out of the blue, pointing to a mansion in Jersey City once owned by a Jesse Paulmier. Our Jesse of Veblen House, born in Jersey City, was clearly named after his grandfather, Jesse Paulmier, whose last name in turn came from Francis Zaner and Susan (McLaughlin) Paulmier. 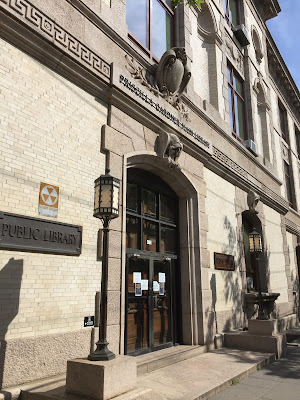 John Beekman of the Jersey City Free Library, which happens to be located on Paulmier Place, provided some insights into Susan Paulmier's remarkable life, in the form of old newspaper articles from the Evening Journal. For a change, the articles invest more ink in the women than the men. According to our very helpful librarian:

"Susan Paulmier, widow, and her son Jesse first show up in the Jersey City directories in 1855. At first listed as a grocer, Jesse became secretary and later a director of the Jersey City Insurance Co. His mother did well enough as a real estate speculator to merit an obituary in the Evening Journal - though her son Jesse only got death notices, the more substantial being in the Argus.  His wife Cornelia got a brief paragraph even though she had moved out of the city."

The obituary for Susan Paulmier, on April 22, 1874, described her this way:

Mrs. Paulmier was a remarkably active and energetic woman, and by her business capacity and industry in her younger days, and by judicious investments, had accumulated a large fortune. Her self reliant, independent ways, and her unusual business ability, were always noticeable. She was kind-hearted and generous, choosing always her own methods of doing good, and many of the poor will miss her sadly.

The obituary tells of the heroic manner in which she died:

The death of Susan Paulmier, one of the older and among the best known residents of this city, which occurred yesterday, was very sudden, being caused by heart disease of the rheumatic type. Her death came almost without warning to herself or her friends, and was no doubt hastened by over exertion. The last act of her life, and the one which brought on the fatal attack, was one of kindness to a poor friend. Mrs. Paulmier, hearing that an old German woman, who had been frequently employed by her, was lying very ill, went by the horse cars to Greenville, where the poor sick woman lives. In the forenoon, for the purpose of making provision for her comfort, and remarked to Dr. Bowen, before going, that if the poor woman was found well enough to be moved, she would have her brought to her own residence to be nursed. Mrs. Paulmier, who was in her usual health apparently, little thought that she herself was so near death. She went to Greenville, and walked some distance over rough roads to pay her visit to the sick woman, and on returning in the horse cars was seized with a severe attack of the malady which proved fatal. She succeeded in reaching Dr. Bowen’s residence, near her own, and there remedies were applied which gave her much relief. She was removed in a carriage to her own house, and while the doctor was absent to prepare additional remedies for her, she went to bed and died almost immediately. Her son, Mr. Jesse Paulmier, President of the Jersey City Fire Insurance Company, had arrived home only a few moments before her death, not having been aware that his mother was ill. Most of the other members of the family are absent in Minnesota. 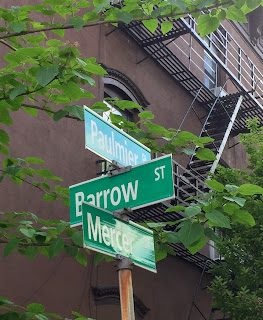 It is likely due to Susan Paulmier's status in Jersey City that Mercer Street changes its name to Paulmier Place for a block, in the middle of town at the intersection with Jersey Avenue. 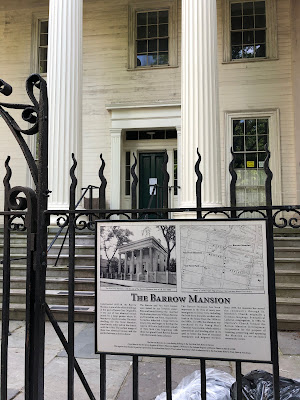 The Barrow Mansion, which Susan bought for her son Jesse, dates back to the beginnings of Jersey City, when Cornelius Van Vorst owned much of the land and dreamed of turning what was largely tidal marsh into a fashionable suburb of Manhattan. According to the Barrow Mansion website, he divided his land in 1835 into large lots, one of which became Van Vorst Park, and along with William Barrow built twin mansions on some of the higher ground. Their families remained there for 30 years before selling the Barrow Mansion to the Paulmiers in 1868. 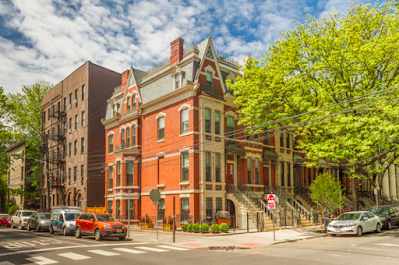 Susan also bought land next door where in 1880 the Paulmiers built Hampton Court Terrace, a series of seven row houses, described at the time as “The handsomest and most unique buildings in the city…" According to an article in Jersey Digs, the Paulmier's Hampton Court Terrace was "likely named after Hampton Court on the Thames, a castle in London, as the Paulmier family had deep connections to England." The deep connections to England probably refer to the ancestor Andrew Newcomb, who was born in England in 1618, then moved to America. When Jesse Paulmier died suddenly in 1879, his wife and three daughters moved out of the Barrow Mansion and into the seven row houses of Hampton Court. Perhaps as as continuation of Susan's tradition of assisting the poor, the Barrow Mansion was bought by the YMCA and continues to provide community services.
The oldest of the older Jesse's daughters was our Jesse's mother, Jennie Madelein Newcomb Paulmier. Jennie's second middle name comes from her mother, Cornelia Bush Newcomb, whom on page 298 of Andrew Newcomb, 1618-1686,and His Descendants, is listed as one of ten children of the Honorable Obadiah Newcomb, an architect and builder who settled in New York City.  "He had a very large and valuable law library; was assessor and chairman of State Whig Committee; also, State Senator."

I'm going to go out on a family limb and speculate that Obadiah Newcomb (1787-1857), our Jesse's great grandfather, is somehow related to Obadiah Newcomb Bush (1797-1851), an ancestor of the Bush political family.

It appears that Jennie was the only one of the three Paulmier daughters to have children. After Jennie married Augustus Ward Whiton on Oct. 15, 1873, our Jesse was born on June 4, 1874, and according to Find a Grave, Jennie lost her husband less than one year later, on April 8, 1875, when he "died from an illness contracted when he was on his honeymoon in Europe ..." The father's gravestone, located some distance from the Whiton family's obelisk in Greenwood Cemetery, states simply "Thy will be done."

Jennie nearly lost her son Jesse as well, two years later. According to this account in the Jersey City paper of record, the future builder of Veblen House was saved only by the quick reflexes of his grandmother Cornelia. 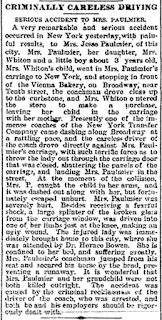 Criminally Careless Driving
"A very remarkable and serious accident occurred in NY yesterday, with painful results, to Mrs. Jess Paulmier, of this city. Mrs. Paulmier, her daughter, Mrs. Whiton and a little boy about 3 years old, Mrs. Whiton's child, went in Mrs. Paulmier's carriage to NY, and stopping in front of the Vienna Bakery, on Broadway, near Tenth Street, the coachman drove close up to the curbstone, and Mrs. Whiton entered thestore to make a purchase, leaving her child in the carriage with her mother. Presently one of the immense coaches of the NY Transfer Company came dashing along Broadway at a rattling pace, and the careless driver of the coach drove directly against Mrs. Paulmier's carriage with such terrific force as to throw the lady out through the carriage door that was closed, shattering the panels of the carriage, and landing Mrs. Paulmier in the street. At the moment of the collision, Mrs. P. caught the child in her arms, and it was dashed out along with her, but fortunately escaped unhurt. Besides receiving a fearful shock, a large splinter of the broken glass from the carriage window, was driven into one of her limbs just at the knee, making an ugly wound. The injured lady was immediately brought home to this city, where she was attended by Dr. Horace Bowen. She is confined to her bed, and suffering greatly. Mrs. Paulmier's coachman jumped from his seat and secured his horse by the head, preventing a runaway. It is wonderful that Mrs. Paulmier and her grandchild were not both killed outright. The accident was caused by the criminal recklessness of the driver of the coach, who was arrested, and both he and his employers should be rigorously dealt with."

The New York Transfer Company's "immense coach" mentioned was a freight coach, part of a big operation started in 1870 to transport baggage between railroad terminals and steamship docks.

Nearly two decades later, Jesse's grandmother's obituary appeared in the Evening Journal, at the bottom of a page otherwise filled with news of exploding locomotives, piano and jewelry thieves, rogue cowboys, labor tensions, poisonings, a suicide, and an outbreak of typhus fever. Sounds like it was a good time to go. She died on new year's day, 1895.

Mrs. Cornelia B. Paulmier, widow of the late Jesse Paulmier, died on Sunday at Lakewood. Mrs. Paulmier has lived with her son-in-law, R.W. Stuart, at 85 Park Ave, New York, since she left Jersey City about a year after her husband's death. The funeral took place from Mr. Stuart's residence this afternoon.

By then, our Jesse was 21 and off to college and world travel, but it suggests that he grew up with his grandmother close by.

There are several other intriguing potential connections. Who are our Jesse's remarkable great grandmother Susan (McLaughlin) Paulmier's ancestors? Does the Paulmier name date back to Binot Paulmier de Gonneville, the celebrated French explorer?

And what is this French website that explores the genealogy of the House of CROY, which dates back to the 12th century in Picardy? It includes mention of a Cornelia-Evelyn Paulmier, daughter of Jesse Paulmier and Cornélia Newcomb, apparently the aunt of our Jesse, who married a Belgian prince.

- SAS Henri de Croÿ (21st generation?), Prince of Croÿ and Solre, was born in Brussels on March 8, 1860. He was captain of the Belgian guides. On July 14, 1884, he obtained admission to the nobility of the kingdom of Belgium with the title of Prince and the qualification of Serene Highness, transmissible to all his descendants. He died in Rumillies (Belgium) on February 6, 1946. He married in London (Great Britain), November 26, 1936, Cornélia-Evelyn Paulmier (born in Jersey-City: US.A, October 4, 1877), widow of William Scott, and daughter of Jesse Paulmier, and Cornélia Newcomb. She died in Ghlin (7011, Hainaut, Belgium) on December 17, 1943.

What we do know is that the Jesse who later built Veblen House grew up in very well off circumstances, first in Jersey City, then later on Park Avenue in Manhattan, surrounded by adults: his mother, step-father, grandmother, a tutor and no doubt some servants as well.