Exploring Ancestral Connections Between the Whiton-Stuarts and prominent Ogdens, Stocktons, and John Marshall

Before the Veblen House gained its name, it was built and lived in for about ten years by Jesse and Mary Whiton-Stuart. Mary's maiden name was Mary Marshall Ogden, with ancestry reportedly extending back to one of NJ's founders, David Ogden, and Chief Justice John Marshall. There also appears to be a Stockton connection. Two generations of Stocktons studied with two generations of Ogdens in Morristown. How closely related these Ogdens are to Mary's ancestors, and whether Mary is actually descended from the Chief Justice as reported in her obituary, is unclear. An earlier post notes that the Whiton-Stuarts and Richard Stockton III were both members of the Stony Brook Hunt Club in the 1930s.
In an effort to clarify and confirm the ancestral connections, I'm assembling some info below (click on the "read more"). Lineage doesn't really say much about who Mary was, but it's a start.
According to WikiTree, the Ogden side of Mary Marshall Ogden's lineage goes something like this (wikipedia disputes the Hampshire origin, stating that the family was from farther north): 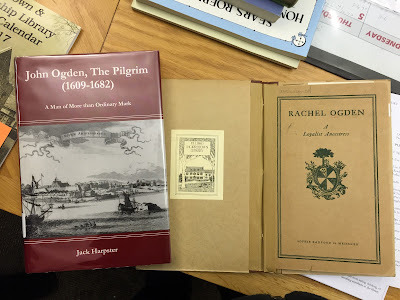 The two big moves on the Ogden side of the family were David's move from England to New England, and then Elias's one-generation long move from Morristown to Mississippi.
There's a 1909 book written about David Ogden, who immigrated to America around 1640. According to wikipedia, he built the first permanent stone church in what is now southern Manhattan, then established the first whaling enterprise in America, and then played a founding role in establishing the colony of New Jersey. In wikipedia's words, he was "an original patentee of the Elizabethtown Purchase, "the first English settlement in the Colony of New Jersey."[1]"
The Richard Stockton connection would be through two generations of Ogdens.
One source tells of how Richard Stockton, signer of the Declaration of Independence, studied with David Ogden, "the most prominent lawyer of his time."

https://revolutionary-war.net/richard-stockton/
Stockton was born in October 1, 1730. He was schooled at Samuel Finley’s Academy of Nottingham. He graduated in 1748, at eighteen years old. On completion of his academics, he went to study law under David Ogden, the most prominent lawyer of his time.

In 1754, Richard Stockton passed the bar exam. In 1763, he received the degree of Sergeant of law (the highest law degree of the time). He married the poet Annis Boudinot and the pair had 6 children.

It may be this David Ogden (so many David Ogdens!) whose son Abraham then taught law to Richard Stockton's son, who was also named Richard and became a U.S. Senator.

Ogden was born in Newark, New Jersey in 1743. He was the third son of David Ogden and Gertrude (Gouverneur) Ogden.[1] His father was a noted jurist and a member of the supreme court for the royal province of New Jersey before the Revolutionary War.[2] He trained as a lawyer, establishing his practice inMorristown, New Jersey. He was appointed Surrogate of Morris County in 1768.[3]
Among those who studied law at his Morristown office were Richard Stockton (later United States Senator from New Jersey) and Josiah Ogden Hoffman (laterNew York State Attorney General). The latter was his nephew, the son of his sister Sarah Ogden Hoffman (1742–1821), who married Nicholas Hoffman (1736–1800).[2]
During the Revolutionary War, Ogden and his brother Samuel sided with the Patriots, while their father David and brothers Isaac, Nicholas and Peter sided with the Loyalists.[3] He befriended George Washington, who often visited the family residence while the Continental Army was quartered in Morristown. During that time his young son Thomas Ludlow Ogden wounded General Washington's hand in a fencing bout, in what is believed to be the only injury suffered by Washington in the course of the war.[1][2]
After the war, Ogden settled in Newark. He represented Essex County in the New Jersey General Assembly in 1790.[4] In 1791 President Washington appointed him U.S. Attorney for the District of New Jersey,[5] a position he served until his death. Washington also appointed him Commissioner to the Indians in Northern New York, and he led the delegation that negotiated the Treaty of New York with theSeven Nations of Canada in 1796.[1]
Ogden died in 1798 in Newark.[2

Mary's lineage from Chief Justice John Marshall hasn't been worked out yet. The wiki site follows Mary's ancestry back a few generations, starting with her mother Josephine: