Who Put the Herring in Herringtown, and the Whiton-Stuarts in Princeton?

The name Herrontown, which lives on in Herrontown Woods and Herrontown Road, keeps trying to merge with the word "herring." Some people call the preserve "Herringtown Woods," either because the word "herring" is more familiar, or they just like the sound of it. Some claim that Herrontown Road was originally called "Herringtown Road," so named either for fish wholesalers nearby along the Millstone River or for farmers who fertilized the rocky soil with herring from the ocean. Jac Weller, a Princeton University football star and historian who later ran a farm on land where Smoyer Park now stands, across Snowden Lane from Herrontown Woods, wrote an article in the Recollector about the small landholder farmers in "Herringtown" who supposedly brought wagonloads of fish back from the coast to fertilize their vegetables.

That article is an important documentation of the farming era from which the Veblen Cottage sprung, but the only part of the herring story to be verified thus far is that members of the herring family of fish definitely did swim up the Millstone River, in the form of shad and river herring. 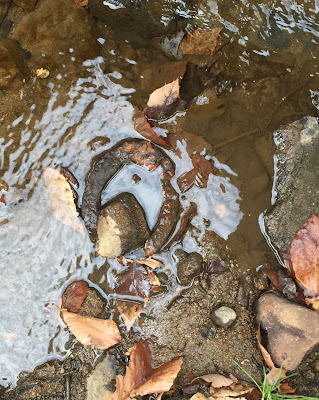 Into these herring-rich waters of historical speculation swam this past fall a human Herring. I had been asked by a friend to teach him about the flora growing in his backyard along Arreton Road in Princeton. As I gave names to the towering trees and native and nonnative shrubs in his woodlot, he explained that his land had previously been part of a large equestrian estate owned by Donald Grant Herring. Crossing a stream that runs through my friend's property, I looked down and spotted an old, rusty horseshoe. Knowing how much Jesse Whiton-Stuart, the builder of Veblen House, loved horses, my curiosity was piqued. Might there be some connection between this Herring and Herringtown, and between the Herrings and the Whiton-Stuarts?
Donald G. ("Heff") Herring made a big name for himself in Princeton in the first quarter of the 20th century, according to an article entitled "A Bloomsburg Boy Makes the Big Time." Son of a Pennsylvania senator, he went to prep school in Lawrenceville. Entering Princeton University in 1903, he starred in football and wrestling, and was master of ceremonies at his class's commencement. As Princeton's first Rhodes Scholar at Merton College, Oxford University, he excelled at British sports, including rugby. After gaining a masters degree, he returned to Princeton to teach english and write sports columns that were avidly read. In WWI, he again excelled as part of an elite squadron of pilots who flew missions over France. 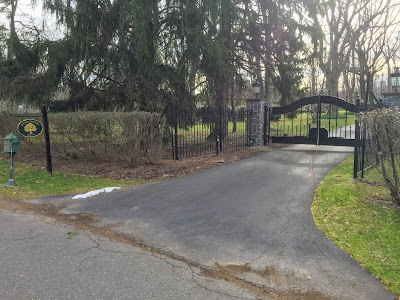 Having married Jessie Markham in 1910, he returned to Princeton after the war and together they bought land overlooking the divide where 206 crosses the Princeton ridge. These 117 acres became Rothers Barrows, an equestrian estate with

an “extraordinarily elegant stone house” designed by noted architect Wilson Eyre in the Arts & Crafts style. Eyre also designed the landscaping in the “Chestnut Hill” style characterized by native trees; there was a stone-walled sunken terrace, a croquet lawn, and for the horses a show ring and barn and a 960- yard race track.

A 2018 tour guide by the Historical Society of Princeton states that,

In constructing their estate, the Herrings prioritized their recreational interests, completing the barns and stables in full, but only fulfilling about one-third of Eyre’s original plans for a large, three-wing manor house. 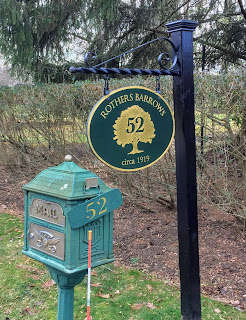 Theirs was one of several estates that ringed Princeton at that time, including Edgerstoune, Constitution Hill, Drumthwacket, and Tusculum. For two decades, from 1919 to 1939, the Herrings lived a life of high society. They hosted Stony Brook Hunt Club events (like this one in 1933) and would show up on the society pages when, for instance, they spent a winter in Lausanne, Switzerland, where their four children attended school.
It's probably coincidence that their last name was Herring, and that their address, 52 Arreton Road, can also be found in the 452 Herrontown Road address for Veblen House.
But it is likely not coincidence that the Whiton-Stuarts' arrival in Princeton in 1930, and their departure around 1940, tracked closely the rise and fall of the Stonybrook Hunt Club (1928-1937) and the club's hosts at Rothers Barrows. The Historical Society of Princeton found the Whiton-Stuarts listed as "hunting members" of the hunt club in 1931. Somewhere in this 1937 photo of the Stonybrook Hunt Club, the Whiton-Stuarts may be standing.

According to Community News, "financially impacted by the Great Depression, the Herrings sold Rothers Barrows 20 years after the house’s completion." That would have been around 1940.
Around that time, in the fall of 1939, tragedy struck the Herring family when their son, Donald Jr., lost a leg after complications from a Princeton University football game injury required amputation. The injury, which sparked renewed concerns about the sport's safety, came just before Donald Sr's book, 40 Years of Football, was published, on Jan. 1, 1940. The father's defense of the game in newspapers describes the nationwide attention given to the incident.

It is the fervent hope of the boy who was injured, and of his family, that no foolish outcry against football may be raised as the aftermath of an accident almost unprecedented in the seventy-year history of the game. Somehow, I do not pretend to know why, this incident has captured the imagination of the American public. A veritable flood of messages of warm hearted sympathy has poured in, from intimate friends, from heads of universities, from many college organizations, both graduate and undergraduate, from football teams, from individual players and coaches, past and present, from the medical and surgical professions, from men and women who have lost limbs; from the press, and particularly the sporting writers, from a wide and deep cross section of the American people.

He went on to find connection with the outbreak of WWII just months prior:

We Americans have been infumed by the controlled press of certain other nations that we are a soft people, because we thrill to the march of an eleven down the field instead of to the tramp of armies of our boys toward and over a neighbor's frontier.

In 1943, the big stone barn at Rothers Barrows burned down, along with 6000 tons of soybeans. 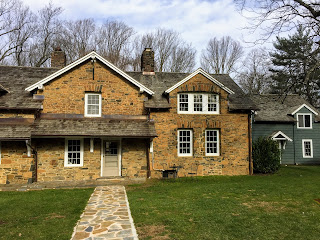 But two other houses from the original estate survive just down the street from the mansion. 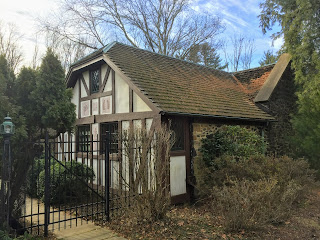 There are also some photos of some of Donald Sr's mementos, found in a trunk.
The Whiton-Stuarts sold their house to the Veblens in 1941, but many things suggest that Jesse in particular would have spent the decade prior riding his horses along the Princeton ridge, mingling with Pynes, Herrings, and others of means.
Also riding Whiton-Stuart's horses was his caretaker, Max Latterman, who spoke of that time in an article from 1980:

Latterman’s responsibilities, while employed by Mr. Stuart, included caring for the grounds, the two houses, the barn, shed and hay barrack, and also the hunting horses. Saddle sore or not, Latterman rode the horses every day to give them exercise. “It was not fun by the time I got off all of them”, he said.

Latterman continued as caretaker after the Veblens acquired the house, and though some accounts suggest the Veblens owned horses, the barn burned around 1950, and one item in the Veblens' wills suggests Latterman was able to spend less time riding horses and more time chopping wood and planting flowers. One of the stipulations in the 1957 deed for the Veblen's donation of Herrontown Woods for public use read as follows:

"It is specifically reserved by the grantors that the nature trails shall not be used for horseback riding.”

The Whiton-Stuarts likely returned to Greenwich, CT, another era in their lives, and perhaps in the life of the Princeton ridge, now past. 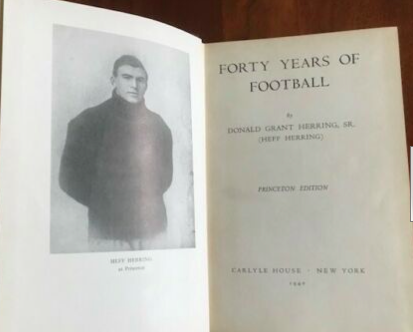