(This is a repost from the companion site, FOHW.org, Friends of Herrontown Woods)

2020 is looking like a good year for Oswald Veblen, whose 140th birthday we'll be celebrating in June. For those who like numbers, mathematicians or not, Veblen's life and career are framed by round numbers. He was born in 1880, began graduate work in mathematics in 1900, became emeritus at the Institute for Advanced Study in 1950, and died at his Brookin, Maine cottage in 1960. 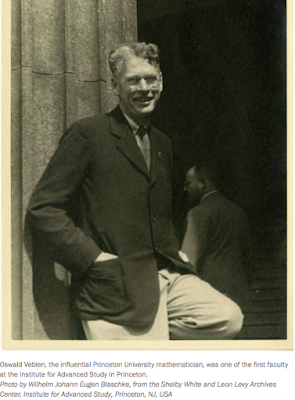 Some deeply gratifying news came recently in the form of Princeton University's annual State of the University letter, in which President Eisgruber puts the legacy of Oswald Veblen front and center in a moving discourse on "the values and qualities that define us as a university."

Eisgruber describes Veblen as "a faculty member with tremendous vision and constructive energy" who "probably did as much as anyone to reform and improve this University." That's some high praise.

As Princeton University embarks on a new round of building, President Eisgruber pointed to Veblen's visionary role nearly a century ago:

"At a time when many Princeton professors had no offices and worked from home, Veblen imagined something novel: a building dedicated to mathematics and designed to generate intellectual community and exchange."

"Oswald Veblen understood that people are the heart and soul of a great university, and he also understood that thoughtfully designed buildings can stimulate the collaborations, activity, insights, and friendships that animate a scholarly community. His vision for the old Fine Hall, and its timely completion, attracted brilliant thinkers to Princeton and forged a scholarly legacy that remains vibrant almost a century later."

Citing Elyse Graham's articles in the Princeton Alumni Weekly about Veblen, the State of the University report also praises "Veblen's humanitarian courage," demonstrated through his early efforts to aid the careers of brilliant women and African American mathematicians, and his


"critical role in rescuing Jewish scholars from persecution in Europe. Veblen worked with the Emergency Committee in Aid of Displaced German Scholars to accommodate refugees at Princeton and elsewhere in the country. The scholars whom Veblen helped bring to Princeton included professors of mathematics, physics, economics, and art history."

The Friends of Herrontown Woods first heard that Veblen would be featured in the President's report a couple weeks prior, when the university's science writer contacted us to ask permission to use some of the photos on our VeblenHouse.org website. As our nonprofit begins repairs on the long-neglected Veblen House and Cottage in Herrontown Woods, we are tremendously heartened to witness the ongoing rediscovery of Oswald Veblen's quietly extraordinary legacy, beginning with writings and presentations by George Dyson and others at the Turing Centennial Conference in 2012, articles by Alyse Graham in the Princeton Alumni Weekly, and now this wonderful tribute to Veblen woven into President Eisgruber's State of the University letter.
Posted by Steve Hiltner