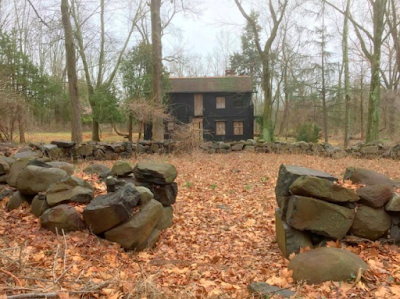 It was an improbable chain of events that brought a dry stone waller to Veblen House. First, the local Town Topics newspaper published a new year's day article about our latest progress in saving Veblen House. Of the photos I sent them, they chose this one--featuring the circular stone horserun with the Veblen House in the background--to publish with the article. Little did we know how and where that article might travel.

Ten days later, a message came via our Friends of Herrontown Woods website:


"Hello!! I am writing to you because a friend of mine from the Dry Stone Walling Association of Canada sent me a link to your article in the Town Topics about rebuilding the walls at the Veblen House. I am a dry stone waller from Vermont. The irony is that I grew up in Princeton as a child (ages 5 to 18) and lived down the street from Herrontown Woods!! I Went to Riverside School and Herrontown was just a bike ride away for me and my friends. Luckily we grew up without electronic devices and riding your bike and exploring the woods (and Lake Carnegie) was what we did. In fact, I have done the creek walk that connects Herrontown to Carnegie. These explorations of the woods was what eventually lead me to Vermont.

I am now a dry stone waller here in Vermont and travel all over for work and dry stone festivals. I am also a teacher at The Stone Trust here in Dummerston, Vermont. Please check out the website. You will see that we are an educational center teaching the art and craft of dry stone walling. I would love to help with the restoration of the walls at the Veblen House. Their are many ways to go about restoring old walls and I would could help if you're interested. Have you thought about a workshop? I have been a part of many public workshops that people learn the craft and as walls get rebuilt.

Herrontown Woods is most strikingly a combination of trees, rocks, and water. In my environmental work I've encountered organizations focused on trees or water, but never stones. At this point, I wasn't sure whether the walls he was talking about were the foundation walls for the buildings or the many rock walls in the woods left from a past agricultural era. A look at The Stone Trust website, whose motto is "In stones we trust," clarified what a dry stone waller does. The website opens up a new world where assemblages of stones--functional or fanciful--are juxtaposed with assemblages of people. Their faces glow with pride and satisfaction that seems rooted in the outdoor walls they have just constructed. Through collective action, the people become part of something larger than themselves, as do the stones that become part of a lovely stone wall. The way the photos are composed, the people connect to something elemental, while the stones seem to gain in humanity. Lately I've been musing that there is something soulful in wood that rubs off on those who work with it. Might stones have a gift to impart to us as well? 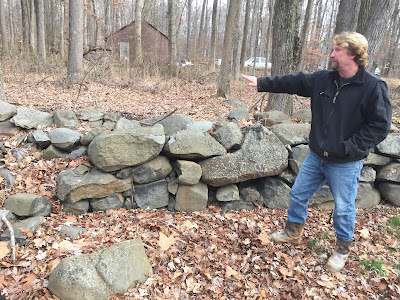 I contacted Torben, and a week or so later when he happened to be in NJ he came by for a visit. Soon he was explaining the logic of a stone wall. Gravity and friction are key to building a wall that will last 500 years. Stack "one on two," which is to say place each rock so that it straddles two rocks below. That way, part of its weight will rest on each of the two rocks. "One on three" is a weaker arrangement, because one of the three rocks underneath will be loose. 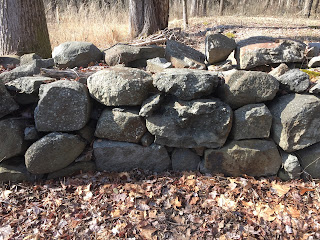 And be sure to "break your seams." Some areas of the horserun have running seams. The photo shows a couple running seams on the left, where a vertical line runs down through multiple layers of stone. Resting each stone on two stones below breaks the seams. Still, the horserun has endured pretty well, despite breaking some of the rules.

Each country has its own style of walling. I explained that the horserun was reportedly built by a German immigrant back in the 1930s, though it's unclear if he had brought any German stone-building heritage with him when he came to the States. 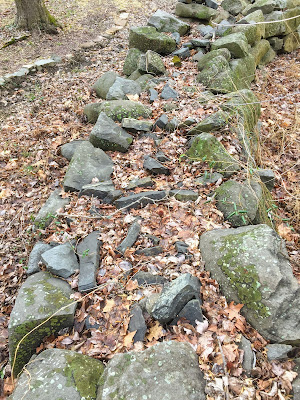 Taking a closer look at the horserun, I noticed its core is made up of smaller stones embraced by the larger stones lining the inner and outer faces of the wall. Torben called this "hearting." 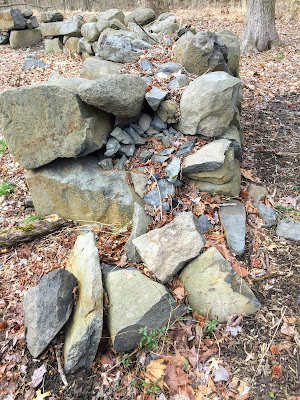 Maybe all the king's horses and all the king's men will have more luck repairing this "check end" than they had with Humpty Dumpty. The sheer weight of the stones will pose a challenge, though. Torben said that this particular kind of stone weighs 175 pounds per cubic foot. He had some ideas about how the stones were originally lifted into place, but that didn't make it into my notes. 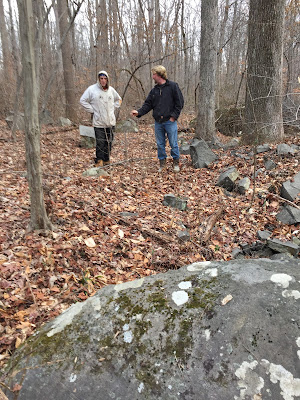 We then took a walk through Herrontown Woods, which surely is a kind of heaven for Torben, with all its boulders. While I tend to see the boulders as nature's artwork not to be disturbed, each with distinct shape and pattern of moss and lichen, Torben was seeing the rocks more as they must have been viewed in the 19th or early 20th centuries, 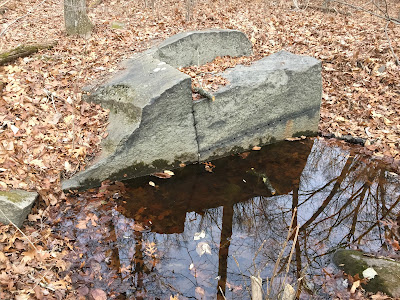 when the diabase boulders were being quarried for stone. One area of Herrontown Woods is pock-marked with the holes where boulders once stood, before they were split into pieces and carted away for various uses. 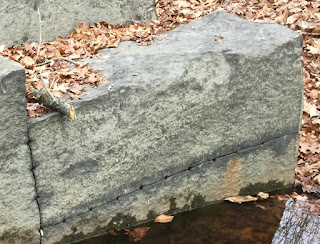 This block of stone must have marked the end of the quarry era, as it was never taken. Torben called the series of holes along the cracks "feather and wedging."

To be a stone waller is to be part of a network few of us have ever heard of. Torben is certified in Britain, and travels there periodically for stone walling events. Every now and then a gathering of rock wallers will do what Torben calls a "crazy build," like a "30 foot bridge, dry-laid," which is to say it's a bridge with a 30 foot span and nothing holding the stones together other than gravity and friction. He mentioned Sunny Wieler of Ireland, who builds intricate stone sculptures. We will never look at a stone wall the same way again.

Hopefully, Torben will return to Princeton to conduct a workshop, much like the ones The Stone Trust leads in Vermont.

After Torben headed back to his stone walling job elsewhere in NJ, I was still curious about the woman in Canada who came across the Town Topics article and is responsible for pointing Torben in our direction. Andrea Cross wrote a nice email back from her well-connected island in Lake Ontario:


"Great to hear from you!

I came across the article during the course of my daily business research which is focused on cultural heritage projects around the world. It was an active google search not an alert.

You are right the story about the connections is pretty amazing.
Here I am living and working from an island in Lake Ontario and I come across your project. What moved me to take a second look was the lovely photograph with the dry stone structure in the foreground that was crying out to me to be restored!

I was professionally interested in your group’s efforts to create an interpretive or visitor center. However the stones spoke to me and it was an exciting “aha” moment...I am assuming Torben told you that I am active in the Dry Stone Walling Association of Canada and helping organize many international festivals which is how I met Torben.

The article was especially well written compared with many I come across. I was moved and inspired by the success and drive of your group.
I thought of Torben and the Stone Trust in Vermont - maybe they might take on the project for you.
On a more personal note my father, who recently passed away at the age of 93, had a love of mathematics and would have been excited to hear of the connection.

In his career he worked at the Microwave Physics Lab in Palo Alto when they were developing laser technology and was one of three people from his company sent to launch one of the successful Moon Bounce operations that moved communications forward in a big way. Mathematics being key.
Anyway....All this is to say I am cheering you on !!

I had mentioned to Torben, if I may help in any way let me know."