This week, the local public library is hosting a workshop in which "participants will write a letter of appreciation and praise to a deserving person in their life." Maybe there's something in the air, with the close of the second decade of the 21st Century, because I had just sent off a couple letters expressing gratitude for professors who had inspired me long ago, in another place and another century.

One was a music professor whose courses on 18th Century counterpoint helped me develop as a composer. His name was Elwood Derr, and using the same simple research approach that has brought to light so much information about the Veblens and the Whiton-Stuarts, I quickly found out that he had passed away, that he had once studied with Carl Orff of Carmina Burana fame, and that his wife might still be alive.

I also noticed that Professor Derr's middle name was Shambaugh. Out of curiosity, knowing from research on Jesse Paulmier Whiton-Stuart just how meaningful a name can be, I decided to search for significant Shambaughs that might be related. Two popped up in an internet search. Remarkably, both were contemporaries of Oswald Veblen and both heralded from his home state of Iowa. What are the chances of that? One was Benjamin Franklin Shambaugh--a very important sounding name. 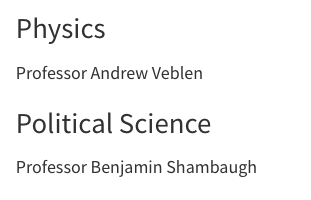 A search for a Veblen-Shambaugh connection brought up a list of faculty from 1900 at the University of Iowa. The screenshot shows Veblen's father and Benjamin Shambaugh one after the other on the list. Friends of mine who went to U of Iowa remember attending lectures in Shambaugh Hall. Like Veblen at Princeton, Shambaugh at U of I had a profound impact on the development of the university. Shambaugh not only built the political science department but also established the State Historical Society of Iowa and promoted the study of local history. A description of Ben Shambaugh and his wife--"The couple had no children, but their home was always a social center for Shambaugh's students and colleagues."--could also be said of the Veblens. Whether Benjamin Shambaugh and my music professor Elwood Shambaugh Derr, Jr. are related has yet to be determined, but the coincidence of names is uncanny.

More reading that sprung from the Shambaugh-Veblen connection shows just how extraordinary was that turn-of-the-century era in which Oswald Veblen came of age. Something was in the air--something like the promise of a nation on the rise. The university website gave emphasis to the list of faculty from 1900 because it represented the dawning of a new era--an era that through the efforts of Veblen and many others would raise America to a position of leadership in academics around the world. When Oswald Veblen graduated from the U. of Iowa in 1898, there were no departments, no majors, no College of Liberal Arts. Students seeking advanced training had customarily headed to Europe, for lack of adequate academic institutions in the U.S.. All that would change as the century turned, in Iowa through the work of an innovative university president, George Maclean, just as Woodrow Wilson would lead Princeton into a new era beginning in 1902. (By coincidence, another Maclean, John Maclean, Jr., Princeton University's 10th president, was "one of the chief architects of New Jersey's public education system.")

Another remarkable Shambaugh from Iowa, born a year after Oswald, in 1881, was Jessie Field Shambaugh, who in 1910 developed the clover logo for what would become known as the 4-H Club. She chose the clover leaf because clover is so good for the soil. Each leaf had an H, representing Head, Hand, Heart, and Home. Though Veblen likely wasn't involved in 4-H, his love of intellect, physical work, people, and buildings is the embodiment of those four words.

Jessie acquired the Shambaugh name from her husband, Ira William Shambaugh. Whether he is related to my former music professor is unknown, but in any case, gratitude has multiplied, as a former composition teacher introduced me not only to musical counterpoint but an unlikely Veblen connection as well.
Posted by Steve Hiltner