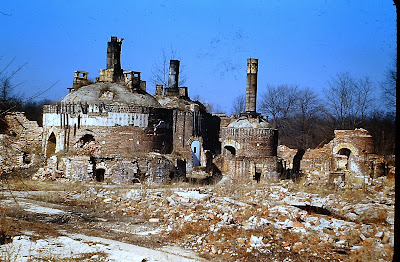 Among all the photos that Oswald Veblen took of the Veblen House and garden back in the 1950s is this photo of what looks like an abandoned plant. I would look at this photo and shrug, then move on to all the others showing Elizabeth Veblen with her daffodils, the caretaker's impressive piles of split firewood, or different angles of the house.

Recently, while researching the life of the Veblens' longtime caretaker, Max Latterman, I found a 1985 Trenton Times article that mentioned that Max had been an unemployed tile factory worker when he "first joined the estate, then owned by a wealthy family from New York." That would be the Whiton-Stuarts, who built and lived in the house before selling it to the Veblens in 1941. Max is the unifying character in the Veblen House story, having cared for the property through three owners: the Whiton-Stuarts, the Veblens, and then Mercer County Parks, which rented the house to arborist Bob Wells and family.

Having lived on Copper Mine Road near Rocky Hill, Max most likely worked for the Atlantic Terra Cotta Company, which had a plant in Rocky Hill until it closed in 1932. This from the Franklin Township Library website, with the same text as in the book, The Millstone Valley Through Time:


In 1894, the Excelsior Terra Cotta Company built a factory on 100-plus acres along Canal Road. In 1907, this became part of the Atlantic Terra Cotta Company -- the world's largest manufacturer of architectural terra cotta. Atlantic's terra cotta adorns the Woolworth Building in New York City and the roof of the Philadelphia Art Museum as well as dozens of buildings that were once dubbed Manhattan’s 'Terra Cotta Skyline.' This factory closed in 1932. 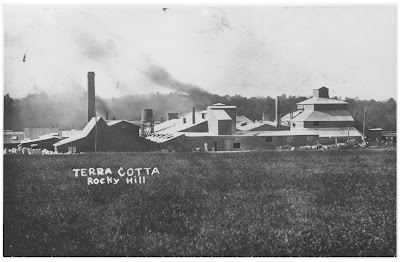 This photo, courtesy of the Franklin Township Public Library, shows what the plant looked like around 1910. It's not clear if the terra cotta for the Woolworth Building and the Philadelphia Museum of Art had its origins in Rocky Hill's clay (Perth Amboy had the company's main plant), but the timing of the Rocky Hill plant's closing fits our story, since Whiton-Stuart bought the land for what would later be Veblen House in 1931. But the Trenton Times article about Max Latterman says he began working for Whiton-Stuart in 1927. Another source says that Rocky Hill's population dropped by half around 1927, which suggests there may have been a big layoff at the plant at that point.

There is, then, a mystery as to whether the builder of Veblen House arrived in Princeton five years before actually building the house. It's conceivable that Whiton-Stuart rented the land for five years before buying it from its owner, Thomas Baker. Since the Whiton-Stuarts were in the same social circles as the Pyne family of Drumthwacket, perhaps Whiton-Stuart was partnering with Agnes Pyne and her horse farm on Herrontown Road well before he and his wife Mary moved to Princeton.

(A bit of an aside: No doubt competing with the Atlantic Terra Cotta Company back in the early 20th century was the American Terra Cotta Corporation in Crystal Lake, Illinois, which may well have made the elaborate and whimsical terra cotta used on the edifice I grew up next to in Wisconsin--an intellectual enclave with some of the feel of the Institute for Advanced Study--called Yerkes Observatory. Only now, through research on a German immigrant to New Jersey named Max Latterman, does that lovely tan color I grew up next to have a name. 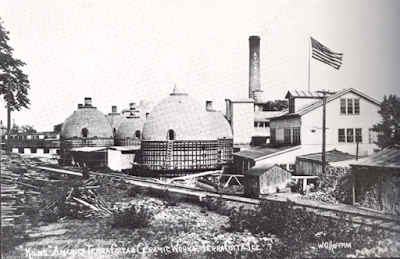 Here's a photo of the American Terra Cotta Ceramic Works in Illinois, which has more of the look of the Veblen photo above.)

Born in 1905, Latterman immigrated to the U.S. from Germany in the 1920s. It appears that research done by Richard Velt, published in "Moving Beyond the Factory Gates: The Industrial Archaeology of New Jersey's Terra Cotta Industry," could help us understand Max's experience as a tile plant worker, and the role of the terra cotta industry in New Jersey. Here's the abstract for the article:


This paper examines the rise and fall of New Jersey's architectural terra cotta industry (c. 1870-1930) through its products. Particular consideration is paid to the factors leading to its growth, the methods employed in manufacturing terra cotta, and the part played by new European immigrants in the success of this industry. Although urban renewal has removed most of the terra cotta factories from the modern landscape, their products still remain. Here attention is focused on the architectural terra cotta that colored urban skylines at the turn of the century and the unusual ceramic gravemarkers that dot the Clay District's cemeteries. These seemingly disparate sources, examined in their historic context, provide interesting insights into the skills, craftsmanship, and ethnicities of the terra cotta workers. 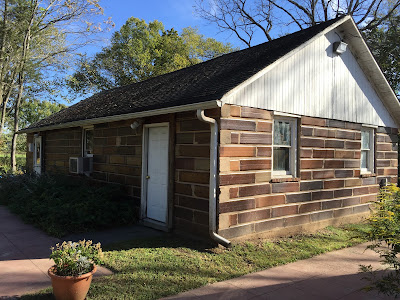 Interestingly, the historic 1860 House in Montgomery, NJ has behind it a building made of ceramic tile.
Posted by Steve Hiltner