When the Body Teaches the Mind 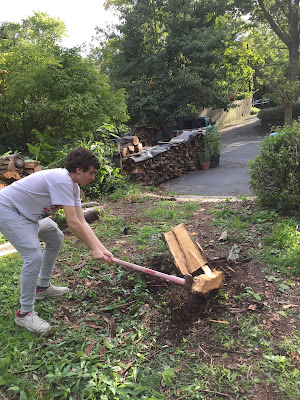 I had a Veblenesque experience recently when the opportunity came along to play the role of mentor. It began when a young man named Mariano showed some interest in learning how to chop wood. He's 16 and was visiting from Buenos Aires, where the opportunities to chop wood surely are few. Yet wood is enshrined in Argentinian culture as the fuel for asado--an often elaborate barbecue in restaurants and backyards that connects urban culture to its pastoral roots of cow-herding gauchos roaming the pampas.

Part of what makes Oswald Veblen distinct among scholars is the strong pastoral sensibility he carried with him into academia. There was his youth spent in Iowa, and before that the farms that his father grew up on--a progression of farms hewed from the wilds of the Wisconsin and Minnesota frontiers by Oswald's Norwegian immigrant grandfather. How might this heritage have influenced Veblen and the town, university, and Institute he so actively inhabited?

My new friend Mariano saw the abundant stacked firewood in our backyard, and asked how I managed to split it all. It was a curious process, teaching him to chop wood, because when I tried to explain how to do it, I realized I didn't really know. My body knows, however, so in order to teach his body how to chop wood, I needed to consult with my own, and then translate my muscles' memory and wisdom into instructions that he could then communicate to his own body. In other words, our minds were mere conduits for knowledge stored in one body that needed to become learned by another.

My body taught me how to hold the axe, how to slide the left hand down the handle as I raise the axe above my head, how to position the legs and use the larger muscle groups to gain power, all of which I then passed along to him. It took awhile for his muscles to catch on. Learning is sometimes a process of finding out how many ways one can do something wrong before the body agrees to do it right. Before long, he had become accurate enough in his swing to split the wood in two, and showed tremendous satisfaction in the accomplishment.

That I know how to split wood at all owes most likely to my father, who became an astronomer after growing up on a farm in northeastern Ohio. My grandfather, like Veblen's, was a farmer and carpenter. That physicality and tradition of building/growing I have then carried forward into an increasingly urbanized world. It can be said to be a heritage and set of skills passed not mind to mind but body to body, and comes in handy if you happen to buy a house with a woodstove, or wish to repair another physical legacy: the house and cottage the Veblens left to the public trust. 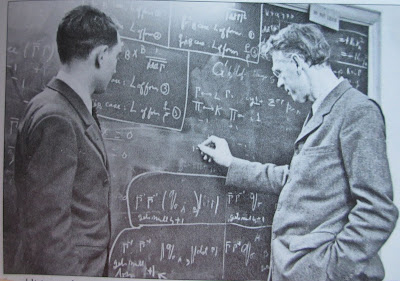 This interplay between body and mind can be seen at many levels in Oswald Veblen's life and legacy. Veblen did a lot of mentoring of young mathematicians in his day, but his intellectual pursuits were deeply connected to a passion for the physical world. That passion can be seen in his love of woodchopping, of the buildings he brought into being, and of the nature he worked to preserve. 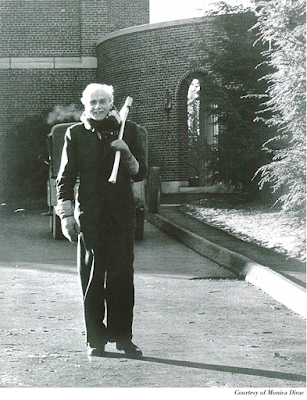 We don't have a photo of Veblen with an axe, but we know he liked to lead his colleagues at the Institute on brush-clearing expeditions in the Institute Woods--the land he did so much to acquire for the Institute in the 1930s and 40s. Among his brilliant recruits for woodchopping was Paul Dirac, known as "the Mozart of Science," who carried on the tradition after Veblen was gone. 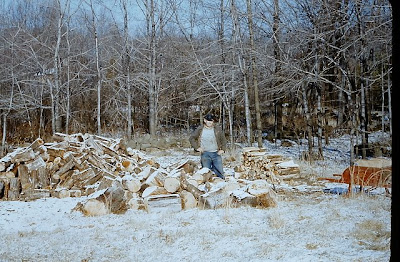 The grounds around Veblen's house, across town from the Institute, included great piles of firewood--the product of caretaker Max Latterman's labors. That wood fueled the woodstove in the cottage, where Veblen had his study, and the fireplace in the Veblen House.

The firewood is long gone, but the buildings Veblen helped bring into being-- the university's Jones Hall, and Fuld Hall at the Institute for Advanced Study--still stand. Those buildings can be seen as bodies, designed to support and inform the intellectual missions of the University and the Institute. Without Veblen's vision and persistence, the Institute for Advanced Study might have remained without a "body" to inhabit, since its other originators thought the Institute could exist without any actual buildings to house it. And it was Veblen's design of Jones Hall (originally called Fine Hall) that brought together mathematicians who had previously been working out of their homes.

The nature Veblen worked to preserve--600 acres for the Institute Woods and 100 acres for Herrontown Woods--is also a body, to be walked through and interacted with.

As people become more urbanized and lose touch with the mechanics of living off the land, trees tend to get romanticized, to the point that a saw and an axe can seem to be the enemy. The slaughter of mature forests worldwide has intensified this view, but utilizing the trees that come down in our "urban forest" brings a deeper level of understanding and appreciation. There's a lot to learn about the wood. Straight-grained trees like ash or red maple, black locust or red oak, split relatively easily, but each section of trunk or branch is different. Some have knots that resist splitting. Some sections of the tree may have been under stress due to the tilt of the tree--a stress that manifests as a more twisted grain that's harder to split. Small cracks in the wood can give clues as to where to aim the axe. Sometimes a section that should split easily does not. If the wood doesn't split on the first stroke, the sound the wood makes when struck can indicate whether it's worth persisting. There's a deep sound that is beautiful to the ear of a wood splitter. That sound says the wood is ready to split and will succumb with another blow or two.

Part of the mentoring of Mariano was to listen for that sound, as we prepared the bodies of trees to feed the woodstove that helps heat the home I inhabit, which in turn inhabits and gives back to the body of nature. In this way, the body in all its manifestations forms and informs our world.
Posted by Steve Hiltner