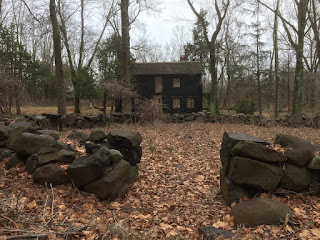 To usher in the new year, our Friends of Herrontown Woods group is hosting a gathering this coming Sunday, Jan. 3, to show off the recent transformation of the Veblen House landscape. Should be a beautiful day, but cool, so dress warmly, and we'll have something warm to drink. In addition to touring the grounds, you can participate in a planting of pawpaws to symbolize new beginnings, not to mention future harvests of delicious tropical-tasting fruits.

Directions: Reach the Veblen House by entering the gravel driveway across from 443 Herrontown Road in Princeton (look for Rotary sign wrapped around a tree), or by taking the trail from the Herrontown Woods parking lot up to the farm cottage (cedar shingle siding) and taking a right through the fence. Veblen House appears as a small white square on this map, north of the parking lot.

Just a few months ago, the grounds around the house were choked with invasive shrubs and wisteria vines. That was before the Tazelaars brought loppers and saws to bear, clearing large areas and opening up pleasing vistas of what I call "the many circled land". Veblen House is located at the edge of the Princeton Ridge. To the east is farmland; up the hill to the west is boulder heaven--boulders born not of glaciers but of ancient upwellings of molten rock. Straight rock walls extend through the woods, marking the edge of what once were 19th century pastures. But at Veblen House, the boulders were put to both functional and aesthetic use. The photo above shows the horse run, where horses could be exercised. 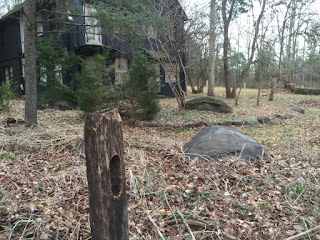 In this photo, a portion of the oval of stones circling the Veblen House can be seen, and an old fencepost in the foreground, likely made out of decay-resistant black locust, is one of several that delineate what was a second and larger oval around the house. 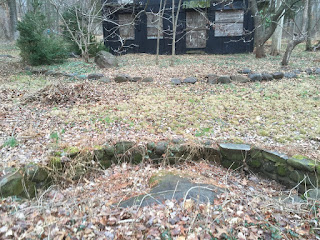 The stone fish pond in the foreground makes a half circle that faces the oval of stones around the house.

There's another, smaller circle of stones that forms a funerary some distance from the house, where the ashes of the Veblens may well have been placed. 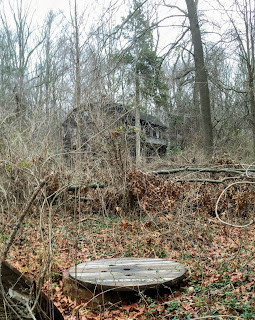 And the wells, of course, are all circles dotting the landscape. In the photo is one of three relatively shallow wells that form a line extending from the house, as if they were cleanout points for a long pipe meant to carry wastewater far from the house. One of the wells we discovered just last week, it having been completely hidden under the growth of invasives. Four other wells on the property were for drinking water, bringing the total to seven. 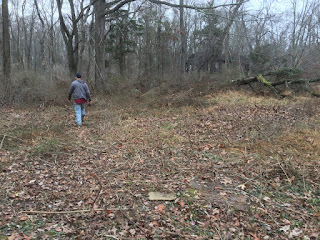 This newly opened area, which receives runoff and seepage from the higher ground up near the house, appears perfect for a paw paw patch. Just one week ago, it was dominated by monster specimens of thorny multiflora rose that, with some major energy input from Kurt and one of his brothers, have been relocated to a brush pile. 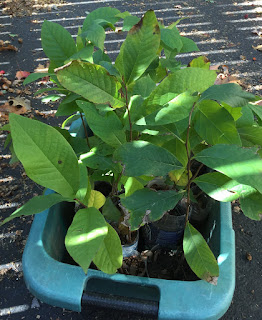 The pawpaws were donated by a friend, Stan, who has a knack for growing pawpaws, persimmons, sunchokes, and all sorts of interesting native species that hover on the periphery of our diets, just as Oswald and Elizabeth Veblen's remarkable legacy hovers on the edge of people's awareness.