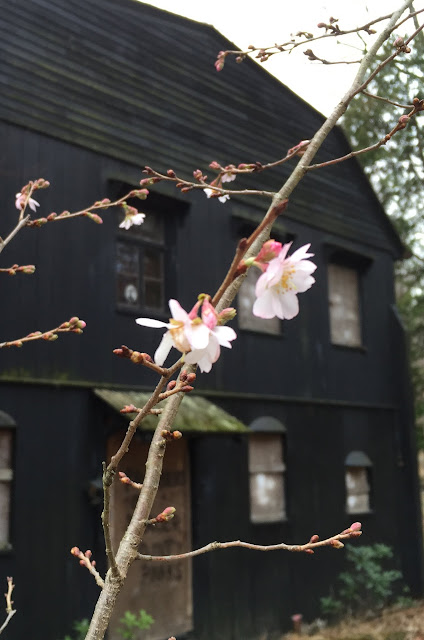 If Thorstein Veblen, Oswald's famed economist uncle, could coin the term "conspicuous consumption", then why not give it a go at the Veblen House? "Fall flowers bring December showers". There. It may lack the trochaic meter of "April showers bring May flowers", but it wasn't much "toil and trouble" to come up with. And clearly it's true. I mean, this flower was blooming in front of the Veblen House on November 28th, and we had rain the first week of December. Clear correlation.

Or maybe it's that, as winter forgets how to be winter, trees lose their bearings. El Nino, like the wizard Prospero shipwrecked on an island far off in the Pacific, has been playing tricks. There was a memorable conversation between two young men on the train headed into NY a few months ago, in which one described to the other El Nino's impact on our weather in New Jersey. "I don't know if I buy that," said the other, not ready to embrace the concept that the world is so intimately interconnected. Sometimes it's these not so clear correlations that turn out to be true.
Posted by Steve Hiltner