By chance, we have learned who built the gazebo that we moved to the Herrontown Woods Barden from 145 Ewing Street in Princeton last year. Though the gazebo, unlike Veblen House and Cottage, is a new addition to Herrontown Woods, it brings along with it some history that turns out to have some connections to the Veblens, the genesis of the preserve, great writers, the founding of Princeton University, and some prize-winning giant tomatoes.

I was pulling out of my driveway to head to Herrontown Woods earlier this month when I happened to see a man and his son standing next to the 145 Ewing Street house across the street, photographing the Bicentennial plaque affixed to the building. The house dates back to 1755, preceding Nassau Hall by a year, so existed when the country was born. 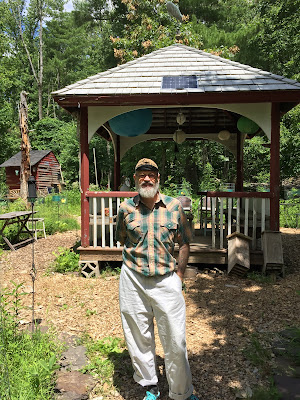 Curiosity can lead to discovery, and so I walked over and said hello. Turned out the man's mother had owned the house. His name is Robert Field, and his mother, Alma Redding Field, had paid two men to build the gazebo a few years after buying the house from writer Caroline Gordon in 1978. Alma also remodeled the kitchen, built raised beds, planted roses, and added a "peeing boy" fountain framed by a rock wall. Alma's big raised beds would later grow a tomato that shared first place in the "Prize Princeton Tomato Contest", with a tomato weighing in at two pounds, eight ounces and a circumference of 18 inches.
Perhaps her inspiration for gardening greatness had been a neighbor just up the street at 178 Ewing, Leopauldine (Pauldi) Hutter, who had won an informal Green Thumb award from Town Topics in 1985 for her softball-sized tomatoes. Pauldi, an immigrant from Austria who was described by the Town Topics as a "cook and gardener extraordinaire and a warm-hearted, hard-working person," had "tended Mrs Oswald Veblen from the time her mathematician husband died in 1960 to her own death in 1973."
By the time I moved in across the street in 2004, 145 Ewing had been bought by Anne Margaret Daniel, who revered the history but at some point moved out of town and would put the house up for sale between tenants. The house was finally bought two years ago, and now, 40 years after Alma transformed the backyard, the property is undergoing another transformation. To many people's surprise, the 1976 Bicentennial plaque on the front of the house did not mean the house was protected. It took an initiative by some of us neighbors to get the new owner and the town to work out a way to preserve the house. The raised beds are gone, but fortunately the 1755 house will be saved, and the new owner allowed us to save and repurpose the gazebo and shed by moving them out to Herrontown Woods.
I invited Robert and his son to come see his mother's gazebo at the Barden (short for Botanical Art Garden). They followed me out to Herrontown Woods, and so enjoyed the location and the company of the volunteers working there that they decided to extend their visit to Princeton an extra day.
The Redding name may sound familiar to many in Princeton. Robert's mother Alma was daughter of Joseph Redding of Redding & Sons Plumbing & Heating. Redding Terrace on Mt. Lucas Rd was named in his honor, after a life of public service, having served on borough council and many boards. A little research on the "Papers of Princeton" site revealed that Alma's family roots in Princeton date back to 1842. Like her father, she was very active in the community, serving on the Princeton Historical Society board for 15 years. Soon after buying the 145 Ewing St house, she joined the Princeton planning board, replacing Wendy Benchley, whom I would serve with on the Environmental Commission some 25 years later.
In 1996, Alma was featured in an article in Town Topics, about her 94 page pamphlet "The Two Princetons: On the Record." Around the time she moved into 145 Ewing, she began a years-long project going through borough council minutes dating back to 1813, many of them written on cotton paper until wood pulp paper came into use in 1840.
The article also describes the house.

"her Ewing Street home is one of the oldest in Princeton, a house built in 1755 for Job Stockton... Sitting In her living room, a cavernous fireplace original to the house on one wall, Mrs. Field notes that this was Job Stockton's first house."He had a tannery, which needs water, and there are brooks nearby." Mr. Stockton went on to build Bainbrldge House, now the home of the Historical Society. The floor of the living room is the original wide-plank, honey-colored pine. In a corner is a Revolutionary War cannonball which Mrs. Field found under a pear tree in her yard. A part of the original front door was replaced in the 18th century after Job Stockton applied to a reparations commission for funds to repair two door panels destroyed during the Revolutionary War." The reference to a tannery and the need for water is interesting. You can see the brooks in this old map of Princeton. The blue line angling to the right is Harry's Brook, which drains downtown and eastern Princeton before flowing into Carnegie Lake over towards Kingston, and if you look closely at the map, you'll see a thin blue line of a tributary heading up and to the left. It ends just to the right of the "T", in the backyard of 145 Ewing Street. That, along with references to two giant willow trees that used to grow in the backyard, suggest that there was a spring there.

Another feature of this old map will interest Princetonians used to driving up Harrison Street to the shopping center. At the bottom of the map is Nassau Street. Harrison Street heads up and then takes a sharp left, turning into Ewing Street just before that little tributary. 145 Ewing is at that corner, and the tributary blocked Harrison Street from going further until the early 1950s when the Princeton Shopping Center was built. Since I live across Harrison Street from 145 Ewing, part of that tributary once flowed through my backyard. In heavy rains, it still does, though most of the tributary is now underground, keeping the neighbors' sump pumps busy.

It's not entirely coincidence that the creation of Herrontown Woods in 1957 followed closely the building of the Princeton Shopping Center. The Veblens' donation of Princeton's first nature preserve was their response to the rapid conversion of farms on the east side of Princeton into suburban development. The loss of the rural landscape made clear to them the need for people to have a place to get away from cars and take a walk.

I got some help from several sources in town about the history of 145 Ewing. Thanks in particular goes to the Historical Society of Princeton, and the Mudd Library had some useful information as well. Job Stockton bought the land from the Hornor family, for which a nearby street is named. In 1756, a year after the Ewing Street house was built, John Hornor along with Richard Stockton and two others contributed the land and funds to make possible the move of the college from Newark to Princeton. Nassau Hall was completed that year.

Some internet sources claim that Thomas Jefferson slept in the 145 Ewing St house the night of November 4, 1783, during a meeting of the Continental Congress, but no evidence of this could be found in the historical records.
An addition to the house was built in the first half of the 19th century, perhaps by Arthur Browne, who owned it as of 1852. According to Amelia Miller McGinnis, who grew up in the house after the Miller family purchased it in 1918, the house had been owned by James Brown and included 18 acres.

"It was called a truck farm. My dad ran that truck farm and sold vegetables. We even went over in the town and peddled vegetables. There were several English walnut trees, and anything you could lay your hands on to make money there in that place.”

Though Thomas Jefferson apparently did not stay overnight, there is evidence that the poet Robert Lowell and other famous writers visited the house. Novelist Caroline Gordon owned the house from 1956 to 1978. During her marriage to another well-known author, Allen Tate, from 1925 to 1959, their guests according to wikipedia

"included some of the best-known writers of their time, including Robert Lowell, who famously camped on their lawn in a tent one summer, absorbing everything he could from his mentor, Allen Tate, while enjoying the southern cooking and constant social life provided by Caroline Gordon. Other visitors were F. Scott Fitzgerald, Ernest Hemingway, William Faulkner, Flannery O'Connor, T. S. Eliot, Robert Penn Warren, and Ford Madox Ford, the author whom Gordon considered her mentor."

Though wikipedia states that Gordon had a house on Nassau Street called "Benbrackets," it more usefully and hopefully accurately states that

Gordon maintained her home at Princeton until 1973, teaching and writing; works of this time include The Glory of Hera (1972).

Gordon and her husband had moved to Princeton--after living most of their lives in the southeast--in order to be closer to their daughter, Nancy Tate, who married a NJ psychiatrist, Percy Wood.

Gordon's correspondence with Flannery O'Connor included reference to two giant willow trees in her backyard. The house next to mine, built directly in the path of where the little tributary once flowed, is said to have had a massive willow tree in the front yard. It was gone by the time we arrived, but the hole is still there.