The Adventures of J.P. Whiton-Stuart, First Owner of the Veblen House

One of the pleasures of adopting a historic house is learning about the people who once lived there. Oswald Veblen's extraordinary career continues to inspire preservation of the house, but there are other fascinating characters whose lives our sleuthing is slowly bringing to light. Though named after the Veblens, the house was originally brought to Princeton as a prefab by Jesse Paulmier Whiton-Stuart and his wife, Mary Marshall Ogden. Such special names, and the ever-expanding archive of old books and newspapers on the internet, make it relatively easy to find all sorts of tidbits about their lives. Jesse, for instance, went to Harvard, but stayed only a year. Why? His report back to the college in 1908 (even non-graduates were expected to send reports every five years on their doings) suggests that sitting in a classroom was not his style:

"After leaving Harvard I travelled all over the Continent and through the Far East, nearly always with a tutor or professor, and am one of the very few having crossed over- land through Persia, visiting missionaries and hermits who had not seen a traveller for twenty-five years. Between these travels I attended Williams College, Massachusetts, and Cambridge University, England, principally for the courses in mathematics. I also hunted as an avocation throughout the West, and won many important events pigeon shooting around New York. I then became associated with Douglas Robinson in real estate, and am now in business for myself as a specialist in selling large private residences."

His marksmanship and interest in mathematics echo similar qualities in Oswald Veblen. And Veblen showed a similar outdoor adventurous streak--George Dyson mentions Veblen having traveled down the Iowa and Mississippi Rivers a la Huckleberry Finn. These three qualities shared by Whiton-Stuart and Veblen lead naturally to speculation that Whiton-Stuart's arrival in Princeton in the 1930s, to settle next to Veblen's land and cottage, was not mere coincidence. And Whiton-Stuart's pigeon shooting--not sure if they were real or clay back then--offers a chance to explore the transition from guns to binoculars for birding. 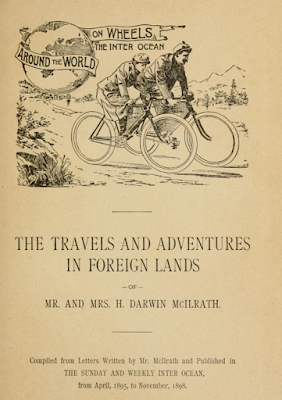 What was it like for Whiton-Stuart in his early 20s to be crossing over-land through Persia? The first clue comes in an 1898 book, "Around the World on Wheels", about riding a bicycle around the world. It popped up on a google search, due to Whiton-Stuart making a brief appearance as a good Samaritan in Chapter 23, on page 120. The title echoes Jules Verne's "Around the World in 80 Days", which was published twenty five years prior in what Wikipedia's account describes as the dawn of global tourism.

To get a flavor of the book, which is beautifully rendered online in highly readable form, a portion of the table of contents, and the passage mentioning our itinerant Whiton-Stuart, are shown below. 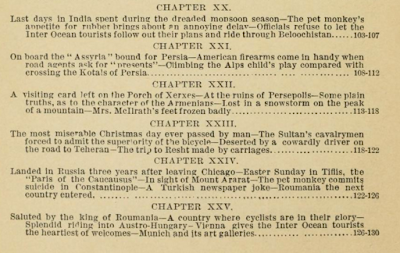 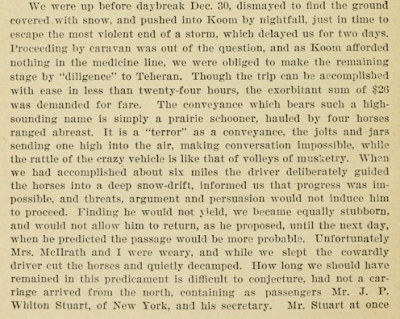