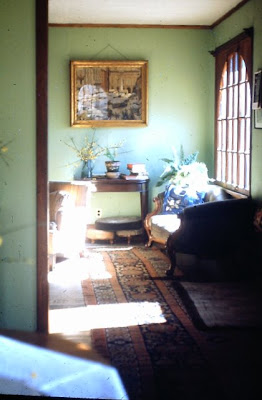 J David Donahue, of Quantico, VA, left a wonderful comment on a previous post that I'd like to share more widely. It gives us some insight into the interior of the Veblen House and the last decade of Elizabeth's life there. Thanks so much to Mr. Donahue, who retired as a Lieutenant Colonel in the Marines, for sharing these childhood memories. (Note: The photo is from the 1950s, and is the only one we have of the Veblen House interior when the Veblens were still living there.)

I was Mrs Veblen's paperboy for a year, 1965-1966. I never received payment from her but I did not care. She never could find cash and instead tried to pay me with old magazines or with little boxes of matches. I often sat with her in her living room and listened to her stories. At first I found her difficult to follow, to understand. Soon I looked at the pictures on the mantel. Although only 11 or 12 I easily recognized pictures of Woodrow Wilson with, as became evident, Mrs Veblen and her husband and others. She seemed to always have a fire going in the fireplace. The home had the aroma of a hunting lodge. I loved visiting with her when I made my bi-monthly visits to get paid. She was lonely and eager to have company. She was wonderful to talk to and I loved her voice and accent. I knew she must be a kind person. I hope the Veblen home is preserved. It is a remnant of an era long gone. Years later, after a career in the Marine Corps and federal law enforcement, I look back and wish I had more conversations with Mrs Veblen.


In email correspondence, Mr. Donahue shared more of his memories of Elizabeth and the house. This would have been five years after Oswald died, and gives a portrait of an elderly woman who had had a remarkable, active, highly social life, now with unaccustomed solitude and the challenges of aging.

She had two large, stuffed upholstered chairs in front of the fireplace. They faced the fireplace and its adjacent wall, not at a 90 degree angle, but closer to 45. She would sit in one and I in the other and she would tell stories. There was a dark oriental rug and bookshelves. There were lots of books in the room, and a small table next to her chair with a cup and saucer. She liked to drink hot tea and many times offered me tea. Her train of thought was hard to follow and she did not always speak clearly. She did most of the talking. She always had a shawl around her shoulders and she moved slowly, stooped over, and shuffling when she walked.

Because there was always a fire in the fireplace, the home smelled like the hunting and fishing club my grandfather belonged to in the 1950s and 1960s. It smelled smoky, but was not overpowering. It was a good aroma. A warm, cozy aroma. I think that I mentioned the photos on the mantel above the fireplace. As an eleven year old, I had already read a lot of American history and recognized group pictures of Woodrow Wilson with a handful of other people. I remember asking Mrs. Veblen why pictures of the former president were on the mantel and she said that she and her husband knew Mr. Wilson. I was impressed!

Prior to my middle school years I spent time in Herrontown Woods. My friends and I found several streams and flooded areas that provided good frog breeding grounds. I remember finding masses of frog eggs in several places where the water was deep and slow moving. We went home and read about frogs and returned a week or two later to find the tadpoles. It was a cool place to learn about nature.

As a boy I liked to listen to my grandparents tell stories, so it was easy for me to sit with Mrs. Veblen. My visits sometimes lasted 20 or 30 minutes, certainly not the norm for a paperboy attempting to get paid. Usually, transactions with my other customers lasted a minute or two on a cold front porch or doorstep. After my one year as an eleven/twelve year old paperboy, I knew that the business world would not be my livelihood. Although she did not pay me, I did not have the heart to cut off her paper subscription. As a child, I did not know much about psychology or aging, but I could tell Mrs. Veblen was not totally coherent. I suppose now we might call it dementia. But I did recognize that she was kind and needed companionship. I knew that I spent way too much time at her home, but we both enjoyed each other's company.

When the spring of my 7th grade year arrived, I had to quit the route. In 1966, the Trenton Times was an afternoon newspaper and I had to choose between playing catcher on the Princeton Middle School baseball team or being a paperboy. I chose baseball. Occasionally, in my secondary school and college years I wondered what happened to Mrs. Veblen. Then a few weeks ago I read in the Town Topics online about a group trying to save the Veblen home. From there I found the blog. I hope your group is able to preserve the homestead. It provides a connection to the past, to a special time in our country's intellectual history, and the history of Princeton.