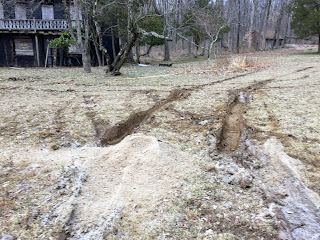 The field next to the Veblen House was left badly damaged by ruts and a pile of road salt, most likely on March 22nd or early on the 23rd. Though it appeared at first to be a joy ride that turned into a quagmire, evidence suggests that a consultant working for Mercer County may have driven across the lawn down to the house, despite slippery spring conditions. The truck got stuck and then another truck may have been called in with a winch to pull it out. That truck may also have gotten stuck. Boards and the salt/sand mixture were apparently used to extricate one of the trucks from the mud. The cable across the driveway, protecting the Veblen site from unauthorized access, was also down. 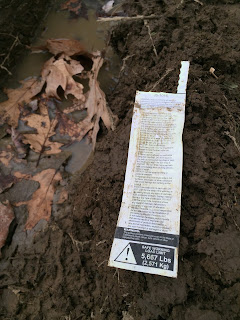 A tag for a winch was found on the grass nearby.

On December 7, the Mercer County Parks Commission voted to spend $23,000 on "permitting support services" that are a preliminary step leading to demolition. This action came as a complete surprise to the Friends of Herrontown Woods (FOHW), the nonprofit that has been restoring and maintaining trails at Herrontown Woods for three years, at no cost to the town or county. The county is well aware of FOHW's desire to rehabilitate the Veblen House and farmstead so that they can be an asset to the community. Mercer County, which owns the buildings and land, has long wanted to demolish them and put up a plaque.

The preliminary move towards demolition put FOHW in high gear to complete its proposal to repair the buildings. On February 3rd, after intense work, the FOHW board submitted to the county a detailed proposal to acquire the buildings and use its own funding to put them to public use for educational programming about the extraordinary history and ecology of Herrontown Woods.

On February 16, FOHW followed up with a submission of all insurance documents, and requested permission to begin working on the buildings so that their enduring quality and potential can be clearly demonstrated to the community. The buildings have been boarded up since 1998, but both were very well made, and the Veblen House in particular is still solid, with roof and foundation intact.

FOHW also asked the county to suspend all further actions towards demolition. Despite repeated followup inquiries, FOHW has received no response. The ruts in the lawn and the downed gate may be a sign that the county has instead been spending money to move forward with its plans.

FOHW is seeking a positive solution for all the supporters of Veblen House and Herrontown Woods, for the community and for the county, which could save considerable money that would otherwise be spent on demolition of these unique historic structures.
Posted by Stephen Hiltner