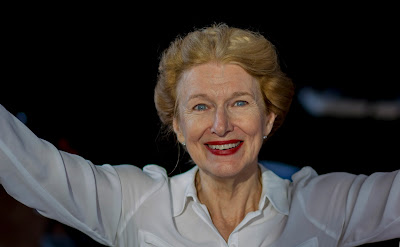 One year ago, June Ballinger debuted her solo performance "Remembrance Day", about her mother's work in WWII England at Bletchley Park, where mathematician Alan Turing was leading the effort to decode the Nazi Enigma machine. Over the past year, June has worked with director Janice Goldberg to develop the one woman show further, including research on the math involved with code breaking.

Alas, I have been distracted and have not posted about her performance tonight, March 4 at 7:30 at Passage Theatre of the new version, which I hear is excellent. If you haven't checked out Passage Theatre, it's a gem, with some of the finest theater productions in the area.

The critical role women played in WWII mathematics and computer development is a recurring theme on this website, including an update at this post about women in my home town in Wisconsin who, according to Nobel Prize winner Chandrasekhar, calculated "immensely difficult mathematical equations entirely by long hand".

June tells me her mother "thought math was great fun ... she loved it." "There is a basic formula my mother and all folks working in the Newmanry had to understand: The formula for the Fish machine."


"The Newmanry was a section at Bletchley Park, the British codebreaking station during World War II. Its job was to develop and employ machine methods in Cryptanalysis of the Lorenz cipher. The Newmanry was named after its founder and head, Max Newman. It was responsible for the various Robinson machines and the ten Colossus computers."