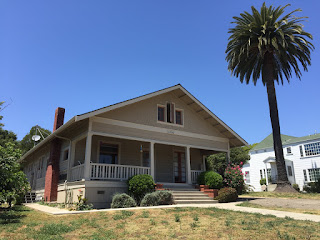 On a recent family trip, we happened to go by San Luis Obispo in California, where the builder of Veblen House lived the last two years of his life. Though he and his wife Mary led a well-to-do, peripatetic life that we've thus far traced from Manhattan to Morristown to Bridgeport, CT, to Tuxedo Park, NY, to Princeton in the 1930s, and even a stint on a cattle farm in Prescott, AZ, I had been surprised to learn of the move to California for Jesse's last days.

Why do the Whiton-Stuarts matter if the house is named after the great mathematician, Oswald Veblen? There's plenty in the Whiton-Stuart story to feed curiosity--their lineage, aristocratic upbringing, dropping out of Harvard to travel the world, the mix of big city culture and outdoorsmanship, the 1920s high society life they passed along to their children, followed by what seems like a fading back into anonymity. To research their lives is to better understand the Veblen House's origins and logic, and the era in which it was built.

Turns out that the house the Whiton-Stuarts lived in for the last two years of Jesse's life still exists. NY Historical Society and the History Center of SLO County pointed to this house, 1236 Palm Street. I didn't even notice the palm tree until I looked back at the photo. 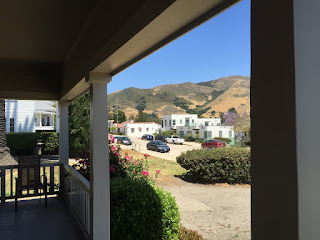 Here's the view that the Whiton-Stuarts would have had from their porch as Jesse fought a losing battle with leukemia.

The house is now a rental, like some others along the street, serving in part the students and faculty at nearby California Polytechnic State University--CalPoly for short. I knocked on some doors along the street, looking for anyone who might have remembered them from 1950, and found one possible lead.

There are a lot of mysteries here. Why did they choose San Luis Obispo? (The "s" in Luis is pronounced. To the victor belongs the pronunciation.) One explanation came from the History Center:


"My guess is that J.P. Stuart chose to live in SLO because it was reasonably close to his son and had an equitable climate with doctors and hospitals nearby. I find it hard to believe that Stuart would move to SLO in 1950 because one of the local doctors had a reputation as a specialist.

Shandon was (and is) a tiny village with few amenities, no doctors and the worst climate in SLO County. It is about 50 miles from SLO."

Shandon is where their son Robert lived. Given all his parents' wealth, it seems odd that he'd choose to live in a tiny village up in the hills with whatever passes in California for a poor climate. Sounds reclusive. 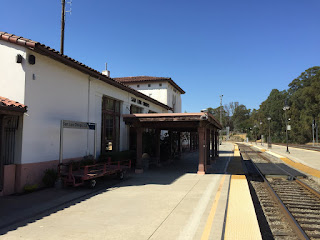 The Whiton-Stuarts might have shared the SLO train station with William Randolph Hearst, but by 1948 he had left his Hearst Castle up the coast in San Simeon to seek better medical care. Though the Whiton-Stuarts socialized with many among Manhattan's high society, there's no evidence they knew Hearst during his many years in NY. 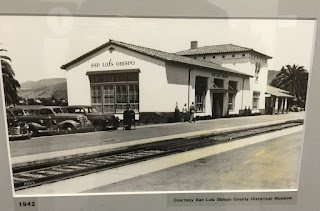 The station looked much the same in this photo taken when it replaced an older structure, in 1942. 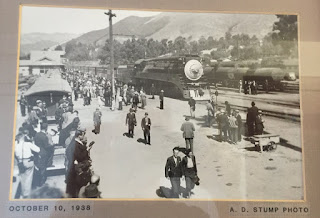 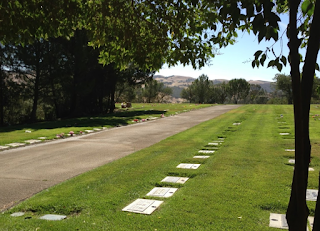 One other mystery is where J.P. Stuart was buried. The county records show he was buried in Atascadero Cemetery, but the cemetery has no record of that. (photo from the cemetery's website)

The SLO County Library sent me his obituary. It claims he was a graduate of Harvard and Williams, but it might be truer to say that he stopped in now and then for some classes, mostly math.

Mr. Stuart, a graduate of Harvard and Williams universities, was a retired real estate man with offices formerly in New York City.

He is survived by his wife, Mrs. Mary Stuart of San Luis Obispo; a son, Robert Stuart of Shandon; and a daughter, Mrs. Nelson Olcatt of New York City.

Private funeral services were held this afternoon in the Palmer-Waters chapel with the Rev. Leroy Perason, pastor of the Grace Tabernacle, officiating.