Ramanujan, Veblen, and Chandrasekhar: After seeing "The Man Who Knew Infinity" 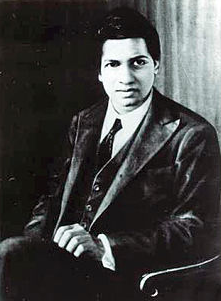 A movie showing in town, "The Man Who Knew Infinity" (trailer here), tells the story of a brilliant but little known Indian mathematician, Srinivasa Ramanujan. Growing up in India, in poverty and with little formal training, he produced a prodigious body of original, unconventional work that ultimately came to light through his persistent efforts to reach out to British mathematicians. Of those he sent excerpts of his work to, only G.H. Hardy of Trinity College, Cambridge, responded, in 1913. A collaboration ensued, with Ramanujan moving to England.

The movie begins with a quote from Bertrand Russell, who is one of the characters: “Mathematics, rightly viewed, possesses not only truth, but supreme beauty—"

There are multiple tensions in the movie: atheism and belief in God, the skepticism of the British mathematicians, racial and institutional prejudice, Hardy's attempts to steer Ramanujan's intuitive explorations of the infinite towards the tedious, earthbound necessity of proofs, the long-distance love for his wife left behind in India, his battles with disease.

Ramanujan was a contemporary of Oswald Veblen, born seven years later, in 1887. Both can be found in descriptions of the "Greatest Mathematicians born between 1870 and 1939 A.D." Though it's not clear if the two ever met, there are several connections between Veblen and the British mathematicians portrayed in the movie. One can find, in the google book "Ramanujan: Letters and Commentary" and elsewhere, that G.H. Hardy exchanged places with Veblen during the year 1928-29, with Hardy coming to Princeton and Veblen spending a year at Cambridge. Though Hardy was not enamored of the study of ballistics, both Veblen and Hardy's close colleague, John Littlewood, joined the military during WW I, in the U.S. and Britain, respectively, to contribute their mathematical expertise to improving ballistics. An interesting article describes Veblen's leading role in bringing a group of mathematicians together at Aberdeen Proving Grounds to work on ballistics. As important as any contribution made to ballistics, the gathering of mathematical minds at Aberdeen "created a community out of a generation of mathematicians" that influenced many of their careers. (Another potentially interesting article encountered is Placing World War I in the History of Mathematics.)

The physical link between mathematics and the human and natural gardens at Veblen House and Herrontown Woods is echoed in IAS faculty member Freeman Dyson's metaphorical praise at the 1987 centenary conference celebrating Ramanujan's contributions to mathematics. From the NY Times:


"Such mathematics has helped drive one of the major new conceptions of theoretical physics, superstring theory, as the physicist Freeman Dyson told a Ramanujan conference last month. 'As pure mathematics, it is as beautiful as any of the other flowers that grew from seeds that ripened in Ramanujan's garden.'" 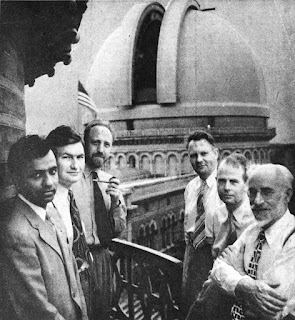 In a personal aside, Ramanujan's origins reminded me of another Indian, Subrahmanyan Chandrasekhar, who was awarded the 1983 Nobel Prize in physics. He was a colleague of my father's at Yerkes Observatory (the two furthest left in the photo). I remember reading with some surprise, having always framed discrimination in terms of black and white, that Chandra also was the victim of racial prejudice during his long career in England and the U.S.. A look into his biography shows some parallels with Ramanujan. Chandra also studied in Madras, two decades after Ramanujan, and followed the same path to Trinity College in Cambridge, with similarly dramatic results, both in extraordinary contributions and cultural tensions. A 2005 article in the Guardian, Battle for the Black Hole, describes the mistreatment Chandrasekhar is said to have endured, resulting in lasting trauma and a 40 year delay in the recognition he so deserved for his discoveries. Third from the right in the photo appears to be Gerard Kuiper, whose research supported Chandra's theories as far back as 1935. The article says Chandrasekhar's discovery was finally vindicated with the discovery of an x-ray source, Cygnus X-1, in 1972. I remember my father being very involved in studying x-ray sources at that time, specifically Sco X-1, organizing simultaneous observations around the world. Kuiper--fun fact here--was Carl Sagan's doctoral advisor at U. of Chicago.

Additional reading shows that Chandrasekhar was greatly inspired by the career of Ramanujan, and is responsible for having later tracked down the only adequate photo of the great mathematician, taken for the passport prior to his return to India from Great Britain. It's the photo above and at the end of the movie.

No clear connection between Chandra and Veblen has yet emerged, though they must have encountered each other at Aberdeen Proving Grounds, where they both served during WW II along with Von Neumann and others. Both may have seen the possibilities for their own careers through their illustrious uncles, C.V. Raman and Thorstein Veblen. Raman was awarded the Nobel prize in physics.

Update: In the original post here, I told a story of my parents taking me to dinner at the Chandrasekhars', and how I had been so overwhelmed by the smell of spices spilling out the doorway that I couldn't even enter, and spent the evening outside on the porch, working on an Around the World trick with my yoyo, while the more worldly experience of Indian cooking was going on upstairs. My older siblings tell me that the host was an Indian grad student at Yerkes, not Chandra, who with his wife lived not in town but in a house overlooking Lake Geneva.

My siblings offered some surely more accurate Chandra stories of their own. One offers insight into the sort of departmental politics that can arise out of having so many high-achieving scholars packed into a small community like Yerkes Observatory. Due to a misunderstanding created by another colleague, the department chair was keeping my father's salary low and refusing to promote him to full professor. Suddenly, my father started getting raises. Turned out that Chandra had persuaded the department chair that my father deserved better.

Chandra dressed impeccably in British formal attire, and his wife, Lalitha (which my siblings pronounce like "Lolita"), wore traditional saris that must have seemed extraordinary in small town Wisconsin.

Another story, which can be obliquely tied to Veblen's ballistics work, involved a game I would play on the observatory grounds, in which I would see how few strokes it took to hit a golf ball all the way around the massive building. It was a challenge to send the ball flying over or inbetween trees, and there were a few times when imperfect execution sent the ball caroming off of the building's tan brick walls. Incredibly, no windows ever got broken in the process. One day, according to my brother, Chandra was passing by on his way home and stopped to talk to me, not to question my dubious pursuits but to explain the purpose of the dimples on the golf ball. Maybe his study of the flow of electromagnetic particles offered insight into how air flows around a golf ball.

In a third story, connected somewhat to Veblen's ballistics and early computer work, Chandra is said to have used top performing female students at my small-town high school in Williams Bay as an early form of "computer", to "calculate immensely difficult mathematical equations entirely by long hand". Based on that experience, he later recommended that female calculators be used to speed up aspects of the Manhattan Project. My sister remembers a Yerkes staff member, Irene Hansen, doing calculations with the aid of a small typewriter-like machine. By brother says it was a Monroe calculator, perhaps like this one, which he says helped him learn multiplication tables. He'd race the machine, and could sometimes beat it as it went "caCHUNKa, caCHUNKa, caCHUNKa".

George Dyson, in his book Turing's Cathedral (p. 159), describes how scientists' frustration with the limitations of the Monroe calculator led in part to von Neumann's work to develop a high speed computer at the Institute for Advanced Study beginning in the mid-40s. The project was received skeptically by all at IAS but Veblen.

Irene Hansen, whose various roles at Yerkes included assistant, secretary, and "computer", later married astronomer Donald Osterbrock, who studied with Chandrasekhar and had a post-doc at Princeton. Osterbrock and another Yerkes astronomer, Bill Morgan, contributed to the discovery of the Milky Way galaxy's spiral structure. I like this quote from Osterbrock's obit: "Morgan's methods were sometimes criticized as being "qualitative," and one critic even accused him of being 'a celestial botanist.'" How many of us get to grow up with a celestial botanist as a neighbor?

Interesting to contemplate how a love of nature led to discovering the Veblen House, long forgotten in a Princeton preserve, which led to learning of Veblen's legacy, which led via a movie about an Indian mathematician back to the world I inhabited as a child in Wisconsin. 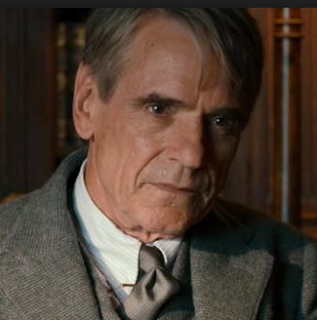 A bit of an afterthought: Note the similarity in appearance between Jeremy Irons in his portrayal of G.H. Hardy

and Veblen late in life. I'm sure Veblen would be majorly flattered by the comparison.
Posted by Stephen Hiltner