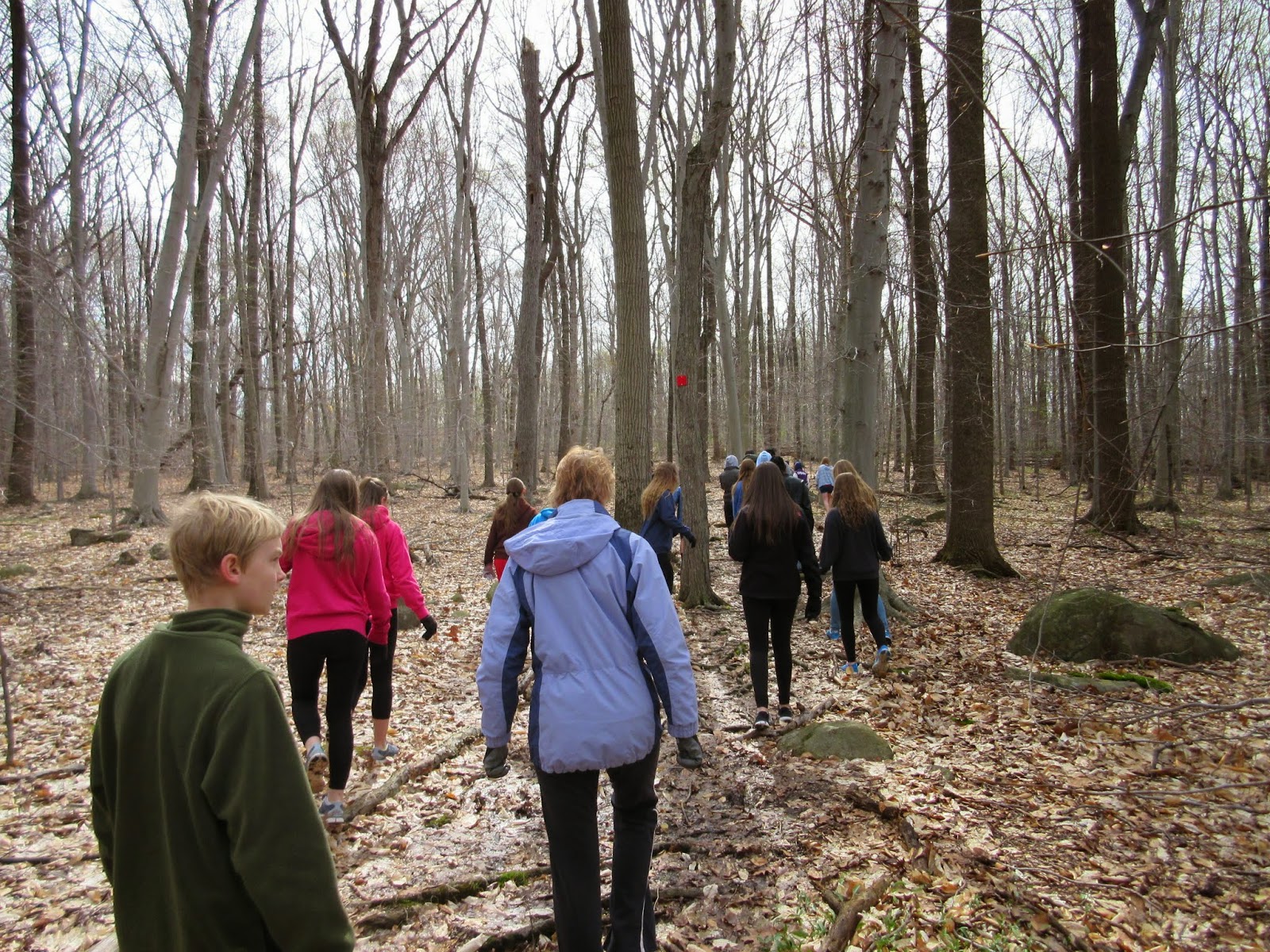 One of Herrontown Woods' neighbors is Stone Hill Church. Back when they were located on Westerly Road, their kids helped me periodically with habitat restoration at Mountain Lakes. Now that they've moved up to the ridge in northeastern Princeton, they've started helping in Herrontown Woods. Last year the Friends of Herrontown Woods helped them build a spur trail from the church into the preserve. Their trail is graced this time of year by spring wildflowers--trout lilies, wood anemone and rue anemone--with the fiddleheads of ferns just beginning to emerge.

This past weekend, I led thirty kids on an expedition from the church into the woods and over to the Veblen House to clear some invasives. 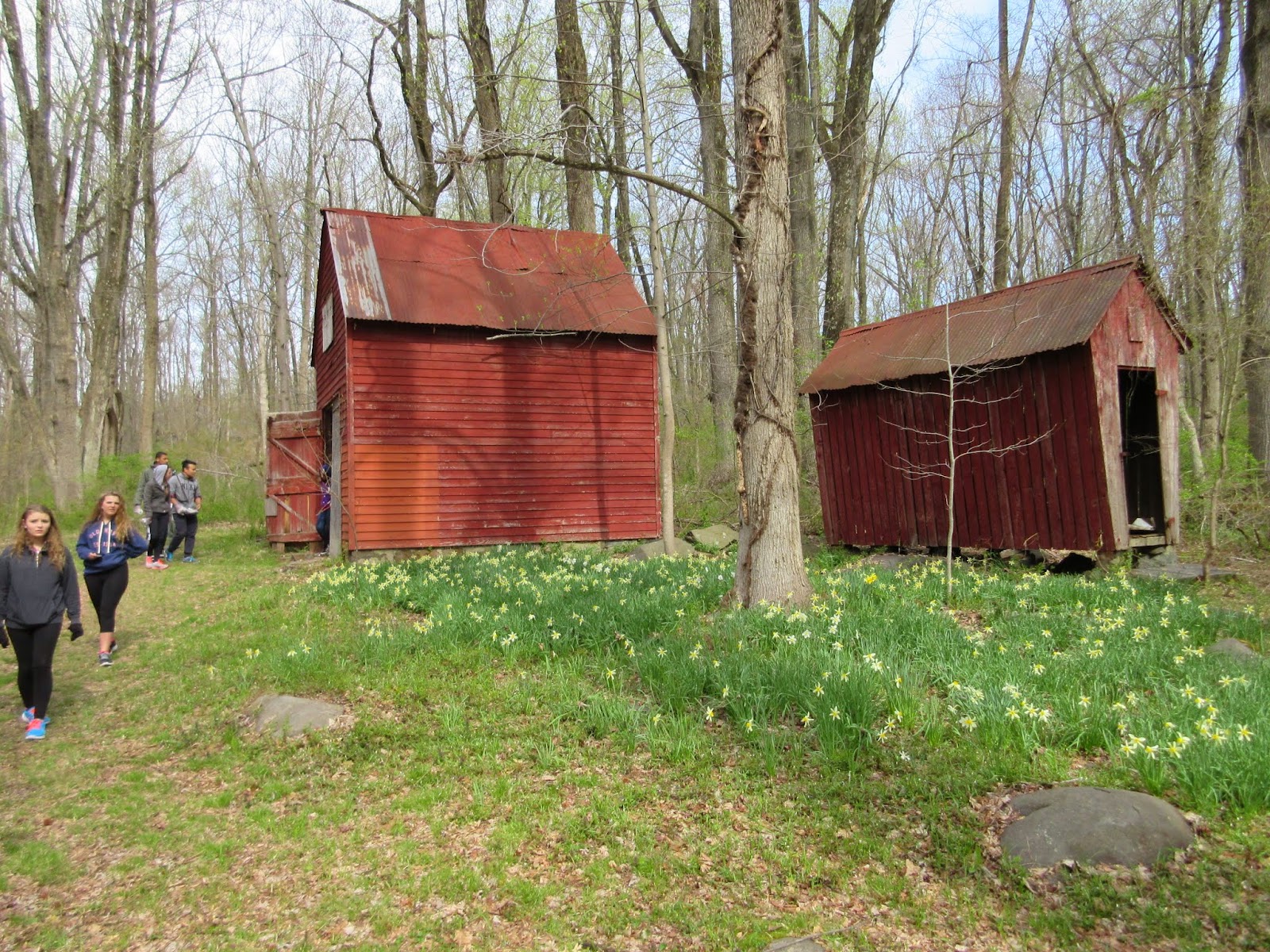 On the way, we visited the cliff, then passed by the 19th century Veblen farmstead, then through the gate over to the Veblen House. This is the first year we could actually see the daffodils in front of the barn, after Sally Curtis cleared all the multiflora rose that had kept them hidden. 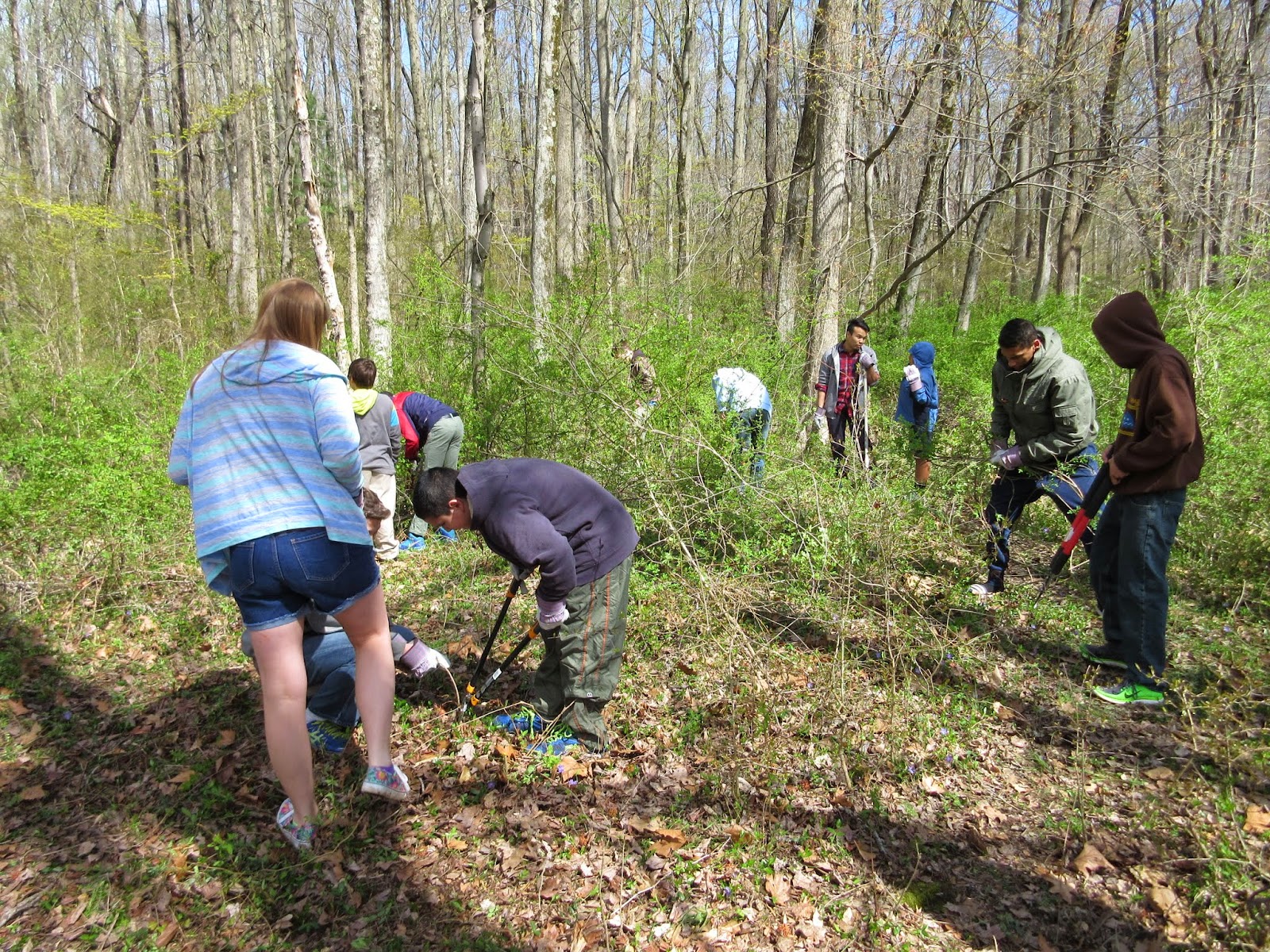 The goal for the kids was to clear privet and multiflora rose from the footprint of a larger barn that used to stand next to the circular horse run. The premise here is that if people can actually see the features around the Veblen House--the horse run, the remnants of the English garden Elizabeth Veblen tended, the barn footprint--it will be easier to appreciate the history and potential of the site. There's a curious story that a public employee used to sleep in the barn. After the barn burned down in the 1950s, they found a metal box containing his paychecks, which he apparently never cashed. That would have been an interesting lifestyle. 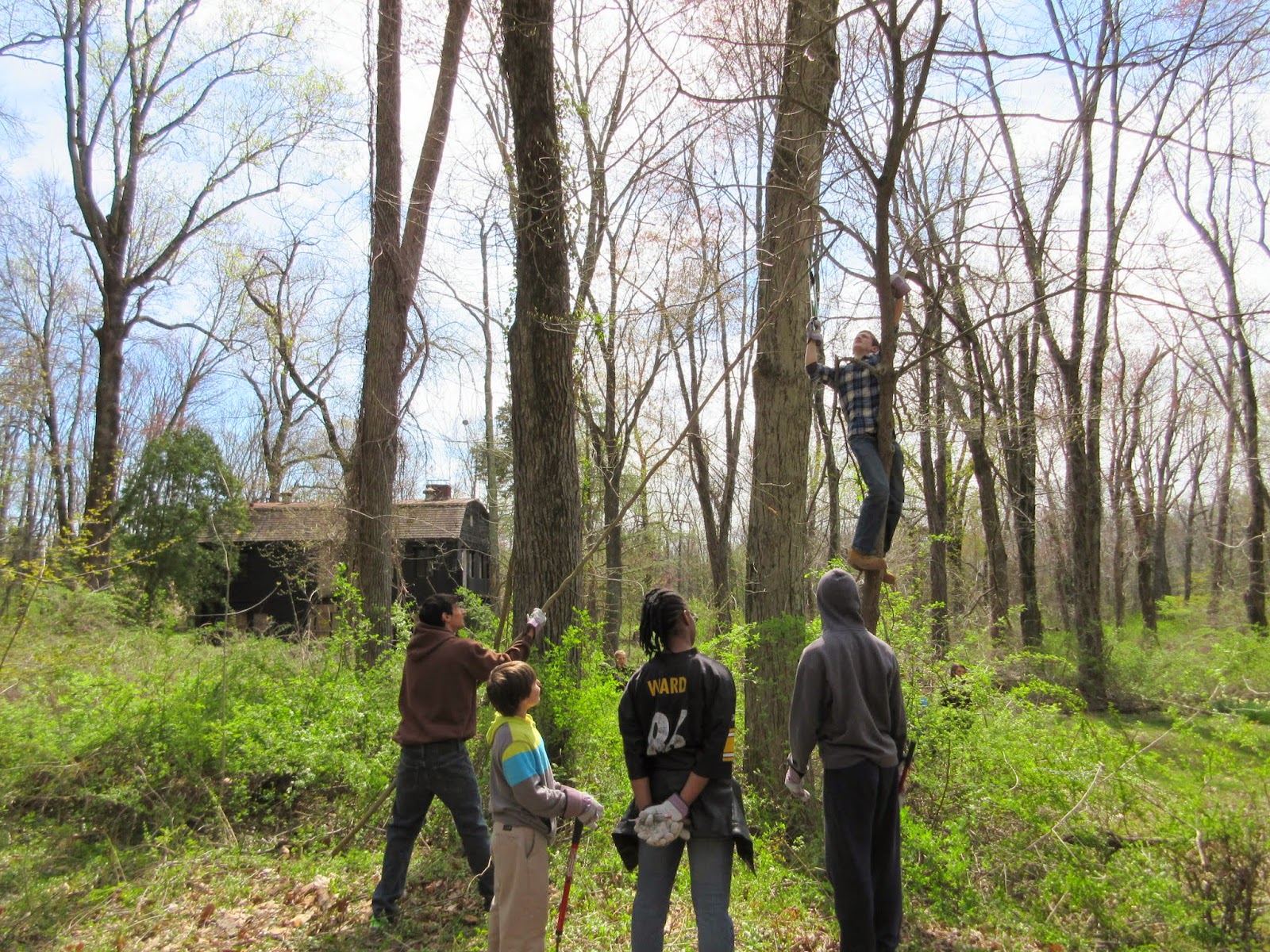 One of the more rewarding aspects of working with youth on invasive shrub removal is that they learn to work together. One will use a garden rake to push the thorny branches of a rose bush out of the way so another can duck under with loppers and cut the stems near the ground. Another then drags the branches off to the edge of the worksite. The roses grow in a very gangly way, so everyone has to be alert and aware of each other, to avoid getting accidentally pricked by a thorn. The aim is to get back to a more gentle nature--the expanse of ferns and wildflowers they saw next to their church, or the garden that once embellished the Veblen House.

One of the teenagers climbed a dogwood tree to liberate it from the clutches of a wisteria vine. The vine had originally been planted for a trellis next to the house. No doubt it was lovely, and fragrant, but when the house was boarded up, the wisteria undertook a kudzu-like expansion into the nearby woods. 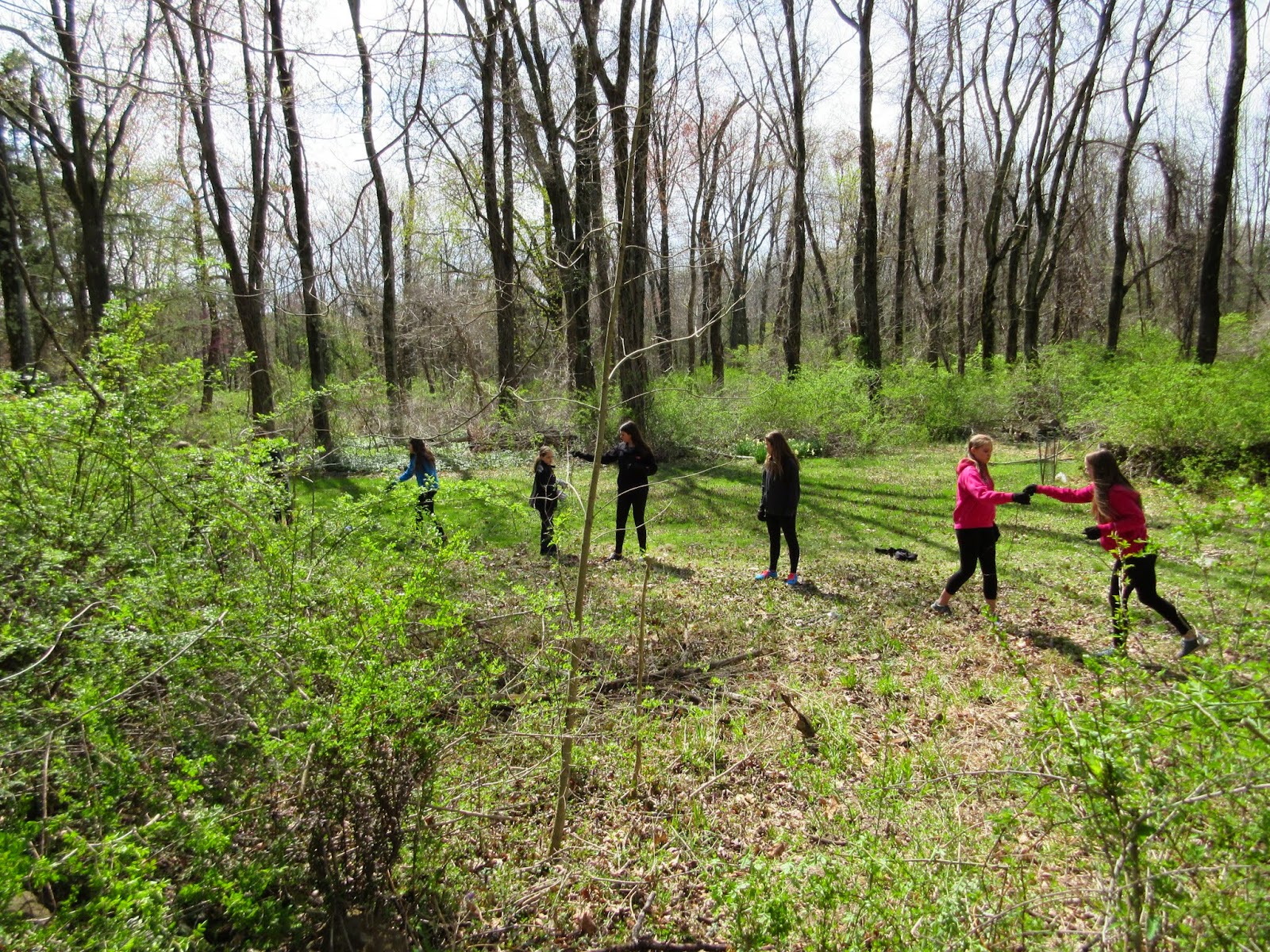 Everyone approached the challenge of invasives removal in a different way. These girls used a bucket brigade method to transfer cut multiflora rose to a pile. 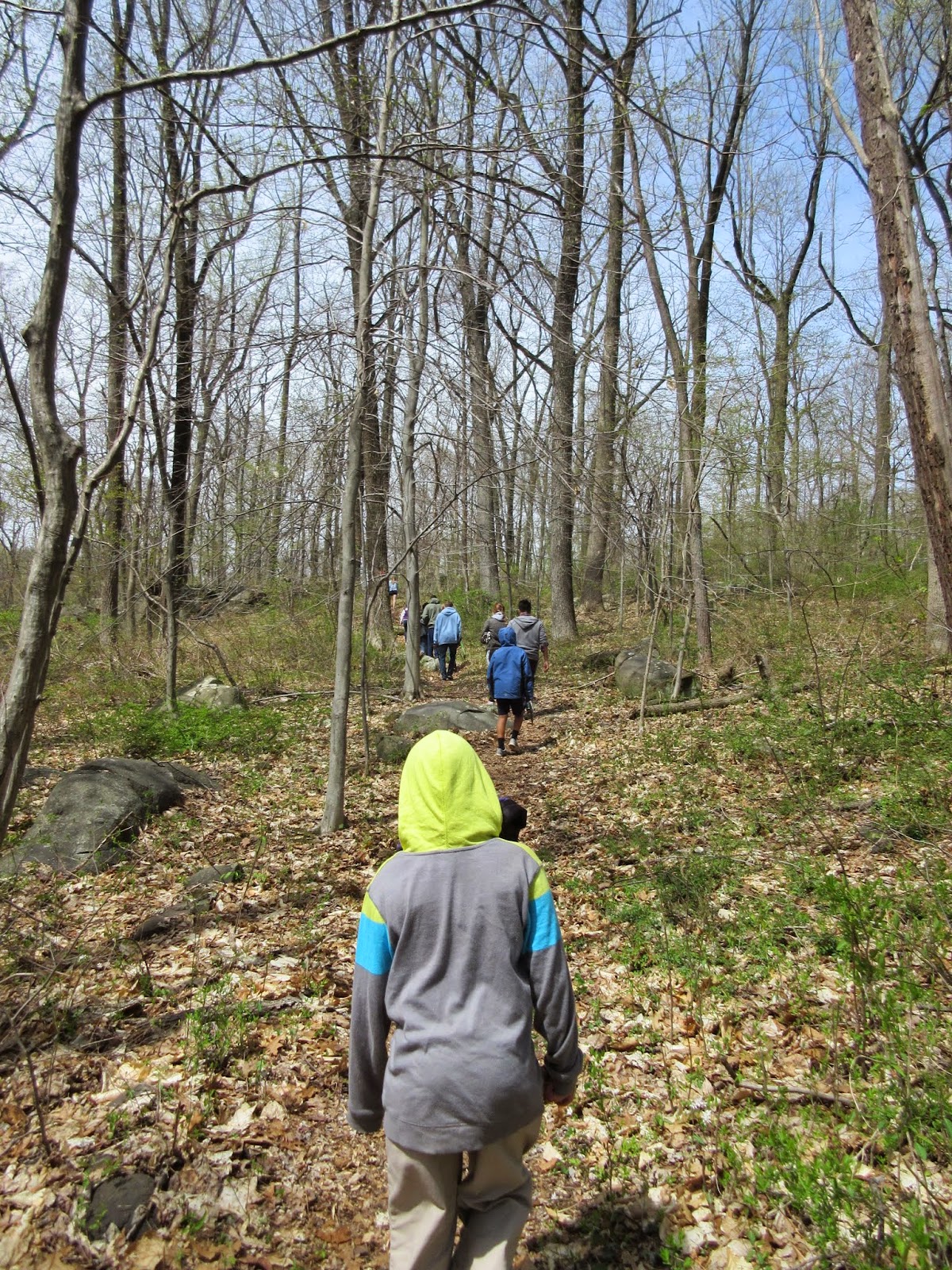 After several hours, and with half the barn's footprint now visible, the kids headed back through the woods to the church.

Thanks to everyone at Stone Hill Church for lending a hand at the Veblen House!
Posted by Steve Hiltner