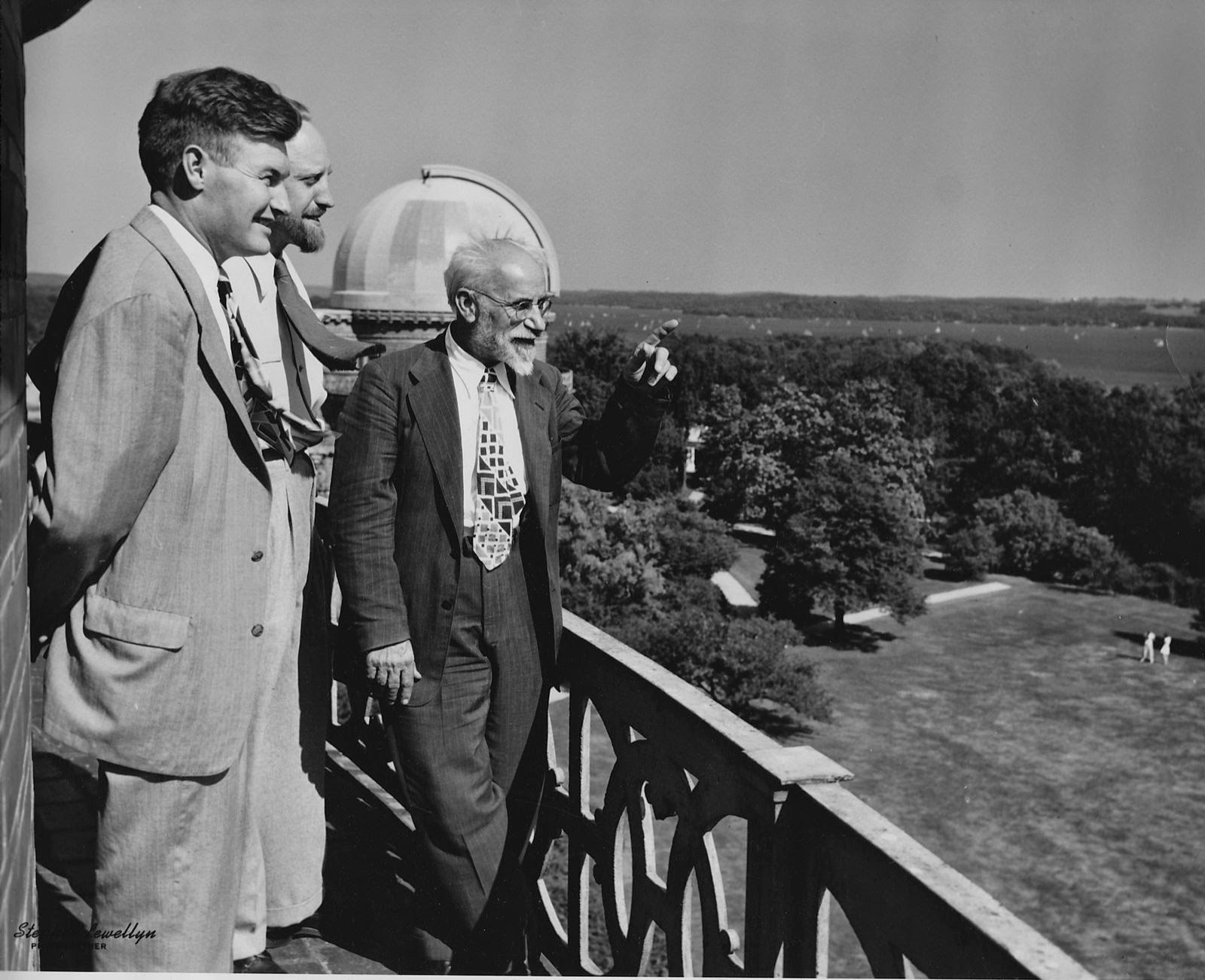 A bit of a personal note. My father, William Albert Hiltner, turns 100 today. (He's on the far left in the photo.) I wish he were still around to celebrate it, but even though he died 23 years ago, the day still has meaning.

Somewhat akin to Oswald Veblen, he became a prominent academic after growing up in midwest farm country, a descendent of farmers and carpenters. Whereas Veblen went to graduate school at the University of Chicago, my father got his first job there some 40 years later, first as an instructor and later as professor of astronomy. In the 1940s, that meant moving to Wisconsin, where U of Chicago had its world famous Yerkes Observatory, with its largest of refracting telescopes and clear, "photometric" winter skies making it a center of research. There's a Wisconsin connection for the Veblens, it having been where Oswald's grandparents first settled after immigrating from Norway. Also like Veblen, my father assumed leadership roles, first as director of Yerkes and later as head of AURA, the Association of Universities for Research in Astronomy.

He loved the outdoors, sailing, and took us on whitewater canoeing trips in northern Wisconsin even though he didn't know how to swim. Some of my fonder memories are of volunteers working together to get the piers and tents ready each year for girl scouts at a camp in northern Wisconsin--the sort of hands-on group effort Veblen may have been getting at when he'd organize colleagues for ventures into the Institute woods to clear brush. Such group effort is rarer today, removed as we are several generations more from the barn raisings of America's rural past.

Among other parallels was the influence that work for the military had on my father's approach to science. This is described in an online bio at the American Astronomical Society website:


"During World War II Al was engaged in the production of front surface mirrors, and in military optics design and modeling, an experience which influenced his later interest in astronomical instrumentation."

Veblen's vision for an institute for advanced study was influenced by the informal atmosphere he found while working at a military proving grounds to improve ballistics during WWI. It was also the vast computations required to create trajectory tables for artillery that gave Veblen an appreciation for early computer designs.

My father's passion for his work extended from research, to teaching, to the hands-on aspects of instrument design. He maintained a youthfulness and inquisitiveness to the end, learning to swim at age 64, and spending the last seven years of his life as project manager for the Magellan Project, designing twin telescopes to be built on a mountain in Chile.

These qualities are shared by Veblen, who made important contributions to mathematics but also lent early support to computer research, at a time when the potential of computers was far from obvious. Quoting from Deane Montgomery's obituary for Veblen in the Bulletin of American Mathematics,

"Veblen remained rather youthful in his point of view to the end, and he was often amused by the comments of younger but aging men to the effect that the great period for this or that was gone forever. He did not believe it. Possibly part of his youthful attitude came from his interest in youth; he was firmly convinced that a great part of the mathematical lifeblood of the Institute was in the flow of young mathematicians through it."

It's this forward looking point of view, this capacity to see a path forwards and willingness to take on all the obstacles in that path, that I most admire in these men, and those who are working together to preserve and repurpose the house and farmstead the Veblens left to the public trust.
Posted by Stephen Hiltner