An interest in knots and Veblen lured me to a lecture on the mathematics of knots two weekends ago at the Princeton Plasma Physics Laboratory (PPPL). One of my ideas for an offbeat daycamp experience at the Veblen House is to reintroduce knot tying to the younger generation, whose exposure to knots may not have advanced beyond tying shoes. 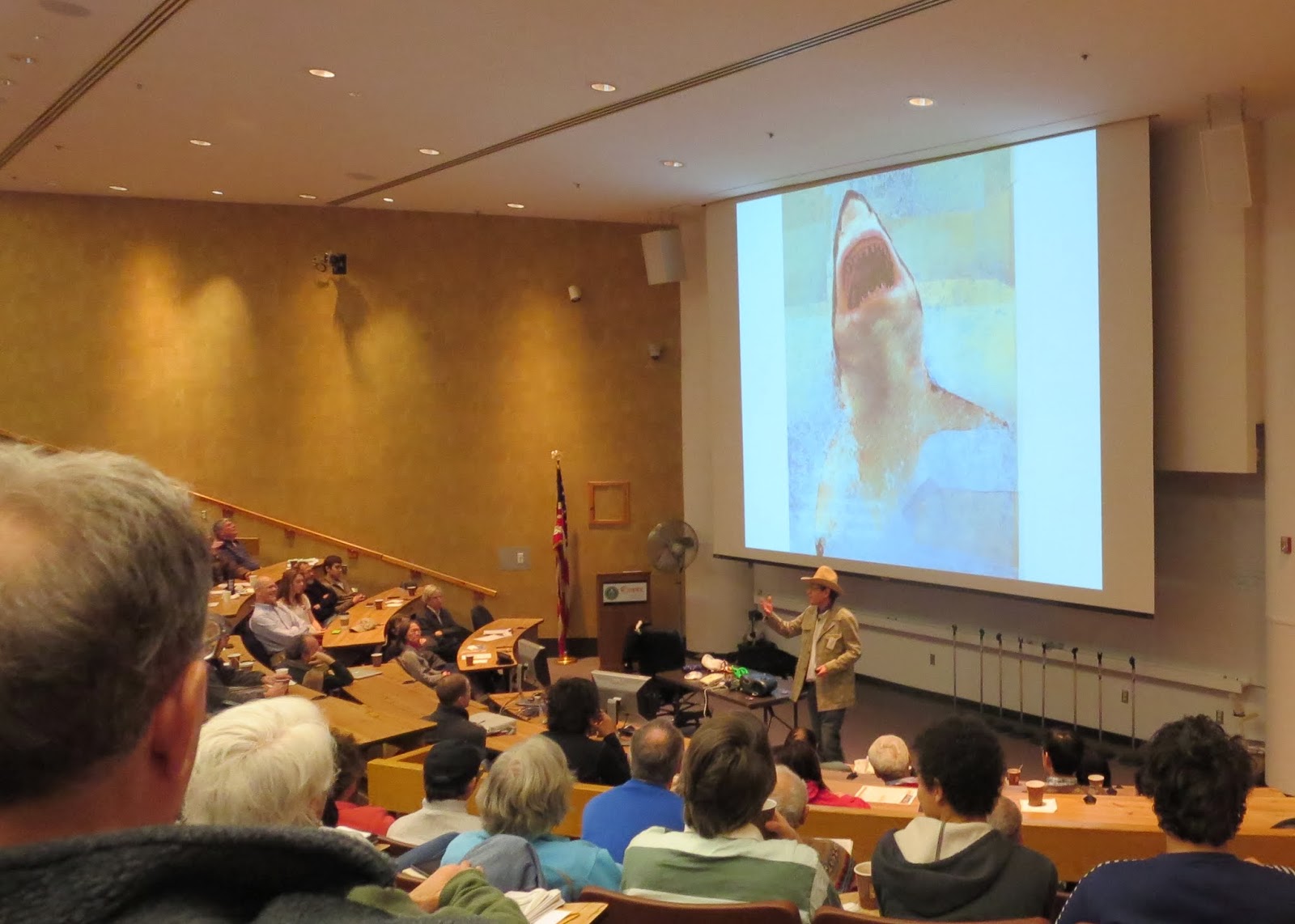 Little did I know that I would witness a mathematics professor being very nearly devoured by a great white shark during his lecture entitled "Blown Away: What Knot To Do When Sailing." Part of the PPPL's Science on Saturday Lecture series, the lecture explored the mathematics of knots through the travails of two characters--a Texan and an Englishman. Colin Adams, of Williams College in MA, was the mathematician/storyteller.

The tall tale he told was of being in a sailing race off the coast of England. In the midst of the race, he discovers there's a knot in the sheet (a sheet, as everyone knows, though I had forgotten, is a sailing term for one of the ropes on a sailboat), preventing him from coming about. Adding to the dilemma, the "sheet hit the flan" that he had brought along for a snack, making it too slippery to handle. He dips the sheet in the water to clean it, a great white shark grabs the rope, and he is suddenly confronted with the question of whether the knot can be undone without having one end of the sheet free. This segued into an inquiry into how to analyze knots visually and mathematically, beginning with Kurt Reidemeister, who in the 1930s developed what Adams calls three types of "Reidemeister Moves". Knot to be undone, Adams eventually wrestles the rope from the shark, unties the knot, and sails into the sunset.

Reidemeister, it turns out, was a German mathematician who was transferred to a less prestigious university from his post in Konigsberg in 1933, due to his opposition to the Nazis. A search of the internet reveals a Veblen connection: Oswald Veblen wrote a letter of support for his fellow geometer Reidemeister (p. 89 in this online book). The strong connection between mathematics and the arts that is a recurrent theme at the Institute for Advanced Study can also be found in Reidemeister, who "wrote about poets and was a poet himself. He translated Mallarmé."

In another parallel with Colin Adams' thinking: An idea of mine for the Veblen House was to name the farmstead either the Pi Farm or the Pie Farm. The symbol for pi, after all, is shaped like a house, and most everything a farm grows can be put in one sort of pie or another. Turns out that Colin Adams co-wrote a book entitled The Great Pi/e Debate, in which they answer the question, "Which is the better number, e or pi?" Princeton has an annual Pi Day on March 14, to celebrate Einstein's birthday.

Another book by Colin Adams that combines math and whimsy, "A Deprogrammer's Tale", appears in recommendations next to "The Dot and the Line", a childhood favorite of mine that is given a connection to the Veblen's Herrontown Wood in this post. Adams also, like Veblen's family, has a Wisconsin connection, having received his PhD at U. of Wisconsin in Madison.

Yet another book by the prolific Adams is an Introduction to Topology. Here's a description of Veblen's contribution to the field: "Veblen's first work on topology appeared just before he arrived in Princeton. He went on to establish Princeton as one of the leading centres in the world for topology research. Analysis Situs(1922) provided the first systematic coverage of the basic ideas of topology and contributed to the development of modern topology."

And sailing? Well, sailing was one of Einstein's favorite activities, and the Veblens had a cottage in a town in Maine known for its wooden boat building. It's not clear if Veblen ever took to sailing. He may have been more comfortable in the woods, clearing brush.

Email ThisBlogThis!Share to TwitterShare to FacebookShare to Pinterest
Labels: mathematics